One of the suspects in a US school shooting has appeared in court, as it emerged the student who lost his life sacrificed himself to save his classmates.

Devon Erickson made his first appearance in court with his head bowed to shield his face with his dark hair, which is partially dyed bright purple.

The 18-year-old, who was cuffed, clad in a orange jail jumpsuit and shackled at the waist, is expected to be charged with murder and attempted murder on Friday.

The second shooter involved in the attack, which saw eight other pupils injured, is a child and therefore cannot be identified in the press.

The younger attacker is being tried as a child, while Erickson will face the law as an adult.

Police arrived and made arrests within minutes of the attack breaking out at STEM School Highlands Ranch in Denver on Tuesday.

The town is near Littleton, where three weeks before the 20th anniversary of the tragic Columbine school massacre that killed 13 people was marked.

Although no motive behind the attack has yet been identified, some fear it was inspired by the 1999 Columbine attack.

One of the attackers was stopped when Kendrick Castillo (18) leapt from his desk to tackle the violent student and bought time for his classmates to escape.

In the process, Castillo lost his life.

Two other students also tackled and helped subdue the attacker.

Authorities have praised the selfless actions of the young people, saying it is likely more blood would have been spilt if it were not for their bravery.

Student Nui Giasolli told NBC's Today was in the literature class where one of the suspects came in and pulled out a gun.

When Castillo, who was days away from graduation, tackled the gunman it meant the other students had time to get underneath their desks and then run across the room to escape, Miss Giasolli said.

"To find he went down as a hero, I'm not surprised. That's exactly who Kendrick was," said Rachel Short, president of the company, Baccara. 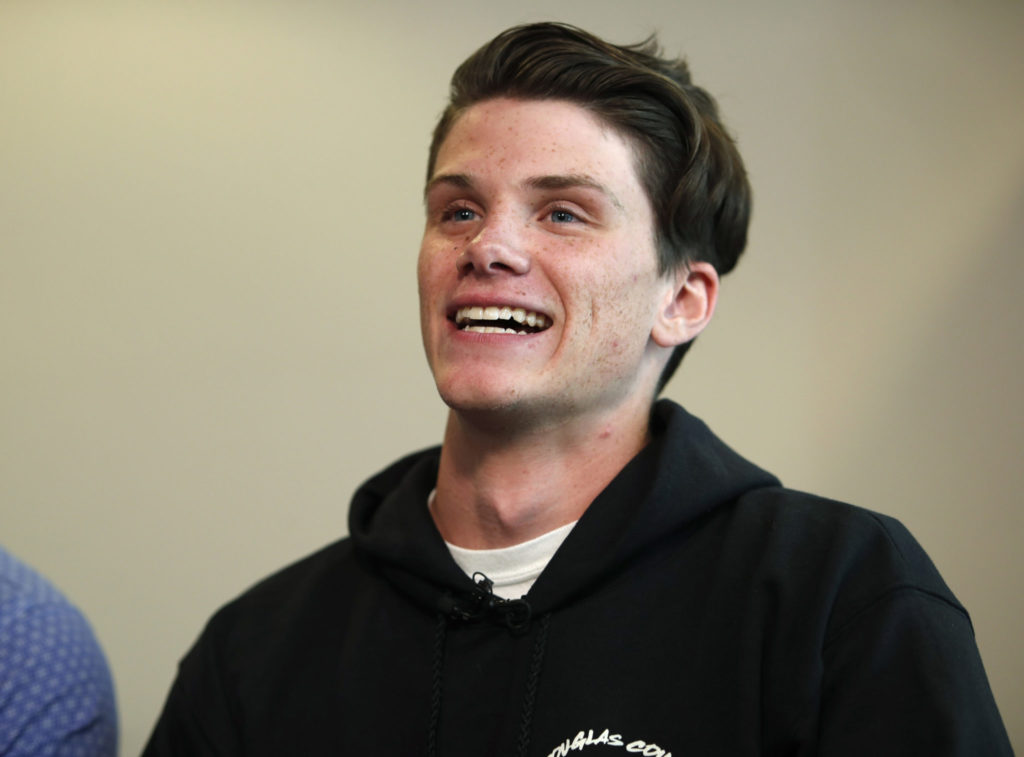 Brendan Bialy smiles while speaking about his part in stopping the attack at the STEM School Highlands Ranch | Image: David Zalubowski/AP/Press Association Images

Brendan Bialy (18) who was enrolled in a delayed-entry programme for the Marines, helped subdue the attackers as well, according to authorities and witnesses.

"His decisive actions resulted in the safety and protection of his teachers and fellow classmates," Marine Captain Michael Maggiti said.

Speaking to Fox-affiliated channel KDBR, Bialy said: "Before I say anything else, and I mean anything else, I am sitting right here, however, there are a couple of other students who aren't.

"One of those being Kendrick Castillo. He passed away, I saw it happen.

"I want to make something very, very clear: Kendrick Castillo died a legend, he died a trooper, he got his ticket to Valhalla, and I know he will be with me for the rest of my life. Seriously, I love that kid."

He added that he loves his other friend, who does not want to be named, who helped subdue the attacker.

Bialy added: "What I saw yesterday was the absolute best of people. I got to see two heroes, regular high school kids, two really awesome people jump into action without any hesitation.

"Someone entered the building with incredibly malicious intent, using their cowardice, surprise and superior weapons, and they lost, they completely and utterly lost to good people."

An armed security guard on the 1,800 student campus managed to disarm and subdue the other attacker.