People in Waterford say posters advertising 'Straight Pride' are not representative of their city...

People in Waterford say posters advertising 'Straight Pride' are not representative of their city.

It comes after around 70 posters were put up around the city earlier this week.

The posters showed a picture of a man and woman in wedding attire, surrounded by a message reading: "Straight Pride: it's natural, it's worked for thousands of years and you can make babies".

They were posted on phone boxes along the quays, and on the windows of some business premises.

They have since been removed by business owners and members of the public.

The posters were put up just days after Pride flags were burned outside Waterford City Hall.

While replacement flags were also cut down by vandals. 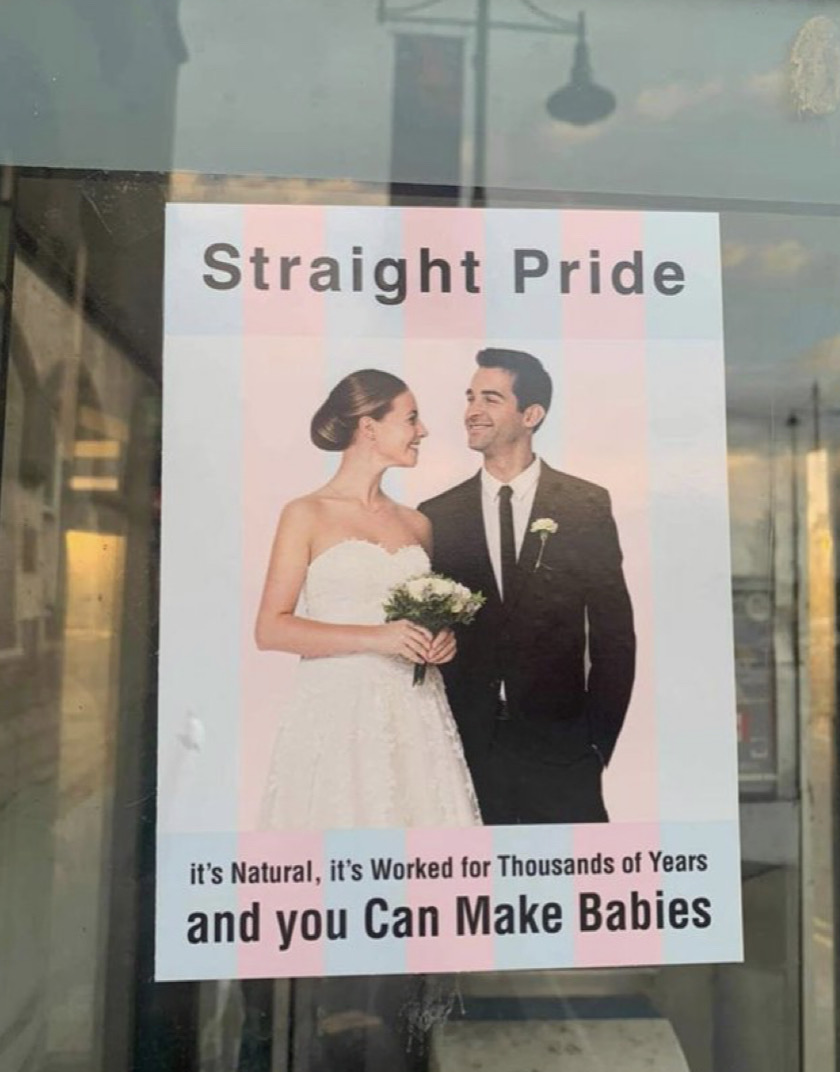 One of the posters put up in Waterford city for 'Straight Pride'. Picture by: Barry Whyte

These people on the streets told Barry Whyte for The Hard Shoulder they do not support those behind this.

One man said: "I do have a family member that is gay, so the instant reaction that I had was 'I hope that they don't see it'.

"It would just intimidate you and it would just make you feel uncomfortable, especially because you're living here.

"But unfortunately these things happen, and it was just disgraceful that it was put up.

"It just so happened to be publicised by the flags".

One woman suggested: "Are people really that jealous that the LGBT community are getting attention that they need to put up Straight Pride and they need to feel important themselves?

Another man said he believes the people behind it were "foolish, I think it's very ignorant and it's just very sad to see".

Debbie O'Rourke and Shane O'Sullivan are from Pride Of The Deise.

Debbie said: "It's usual messaging that's used against the LGBT community - so attacks family values - which is not fair or true.

"There's many, many LGBT families across Ireland now and in Waterford.

"But that kind of messaging spreads an idea, that there's something wrong with being LGBT - which we know is not true".

Asked if she saw it as a homophobic attack, she said: "Yeah, it's definitely an expression of homophobia.

"You could call it somebody spreading a message that they believe in, but the message is homophobic.

While Shane said: "It's a true shock to me, it's not something I've seen or heard in the city before.

"And I really don't think it speaks for the people of Waterford , either.

"I think this is a small group that are expressing their views publicly, but under the guise of darkness, because probably they know that the majority don't agree with them necessarily.

Asked what his message would be to the people who burnt the flags and put up the posters, he said: "Your opinions can stand, but we're going nowhere.

"We've always existed - you may think us unnatural, but we think we're fabulous".

While local bar owner Jim Flash Gordon added that those responsible are in the absolute minority.

"It's one or two people, it is a very, very small minority - I've been working and living in Waterford for the last 30 years and I have come across very little homophobia.

"Waterford is a very friendly city, and it's terrible to see this get to national media.

"I don't think it even should have made the news - but all we're listening to is COVID, so anything that'll make a bit of news.

"It made it locally, it became national, the Mayor got involved in re-raising the flags again.

"Quite a few local businesses have hung Pride flags out, and we normally wouldn't, but now people are just going 'To hell with this, let's put up Pride flags.

"Everyone is going 'Pride is Pride, and that's it'".

Main image: One of the posters put up in Waterford city for 'Straight Pride'. Picture by: Barry Whyte