Homeless figures seen last year have been described as a 'canary in the mine' of where we are.

Head of Policy and Communications at the Simon Communities of Ireland, Wayne Stanley, was speaking as the organisation worked with 22,280 people in 2021 - including 2,140 families.

Their annual report shows a total of 119,291 nights of emergency accommodation was provided, while 5,760 people were supported by Simon’s Rough Sleeping and Outreach teams.

Some 1,550 people also availed of drug and/or alcohol treatment services, and 1,584 people used a needle exchange.

The report shows the overall number of people who engaged with Simon decreased by 1,847 when compared with 2020.

Mr Stanley told Breakfast Briefing it was a year of two halves.

"The numbers can be seen as a sort of a canary in the mine of where we are currently," he said.

"In the first half we saw homelessness in decline; that was largely driven by family homelessness and driven - importantly - by the moratorium on evictions." 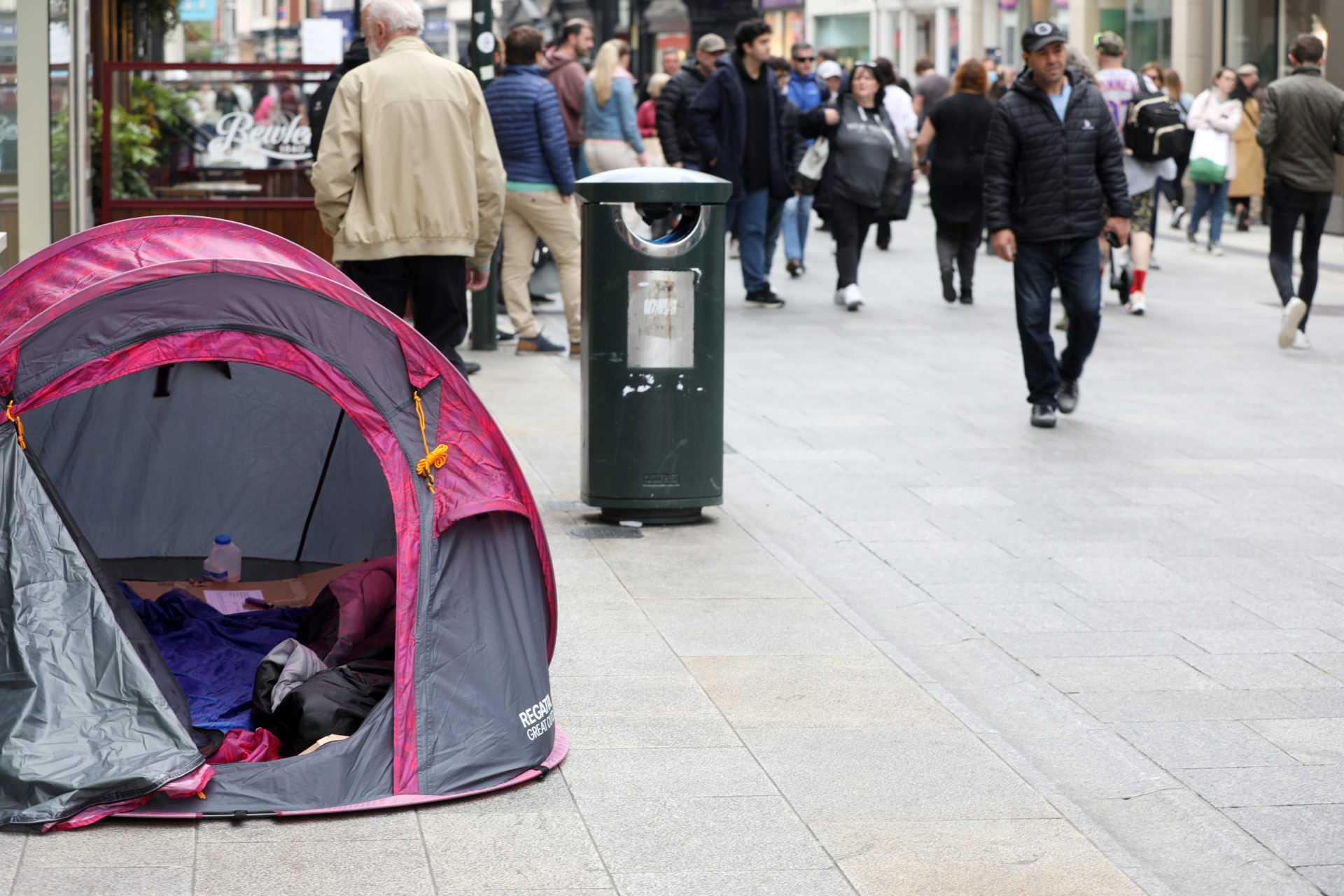 People sleeping rough in a tent on Grafton Street Dublin as shoppers walk past. Picture by: Image: Leah Farrell/RollingNews

He said increased capacity in the private rental sector during COVID-19 also allowed them to "support people out of homelessness again, particularly families."

"When the moratorium was lifted in May, that kind of protection for people saw the number of families increasing again.

"What we also saw was that, as the economy opened up, was a further and further tightening of the private rental market in particular, and the potential and the capacity to move people out of homelessness decreased.

"That saw a very significant rise in the national figures in homelessness, and also saw us have to ramp up our services again".

Mr Stanley said there was one striking element in the figures across the last year.

"There was a really welcome and important fall in family homelessness, but over the year as well there was also a continuing increase in the number of single people in homelessness," he said.

"That's something we've never really grasped a hold of".

He said work needs to be done now while the current moratorium is in place.

"We had the moratorium, it was a boarder moratorium than the one we have now," he said.

"The moratorium we have now is very welcome, but actually that was brought in because homeless services were at absolute capacity.

"What the moratorium now is doing is holding us at that place of high levels of capacity and... preventing us from crashing over beyond our capacity.

"What hasn't been happening is we haven't yet ramped up and created the capacity in the system to support people out of homelessness.

"So that's more private rental accommodation and local authorities allocating, at greater and higher numbers, the people who are at-risk of or experiencing homelessness.

"Critically, that is absolutely what we have to see if we're not going to see - once the moratorium is lifted in March/April - we're going to see an unconscionable increase in homelessness in 2023 if we don't attack it early," he added.