The number of properties available for rent has slumped to an all-time low.

Rents around the country are up more than 10% year-on-year – with the number of properties available at an all-time low.

There were just short of 1,400 homes available to rent on the property website Daft.ie last month – the lowest amount recorded in the website’s history.

Daft said rental availability has “collapsed” in Dublin, with just 712 homes available to rent on February, again the lowest number on record and less than one-quarter of the average recorded for February over the past two decades.

Outside of Dublin, availability is now one-twentieth of the level seen a decade ago.

The average monthly rent advertised on the website between October and December €1,524, which is up 3% on the first quarter of 2021 and double the low recorded in late 2011. 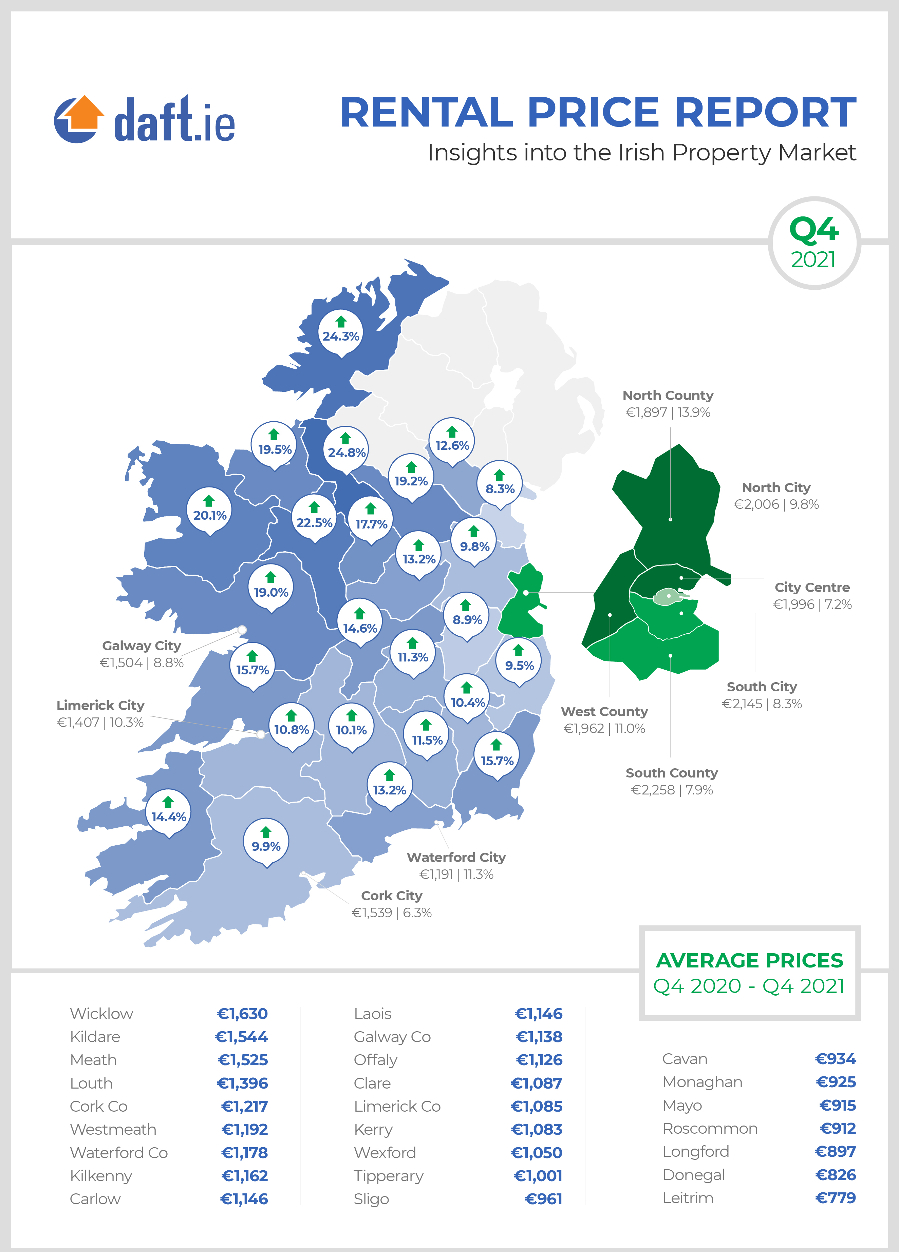 Rents around the country. Image: Daft.ie

“For the year as a whole, countrywide, we saw a just over 10% increase in rents and that compares to more or less flat rents during 2020 when I suppose the pandemic was having its initial impact,” he said.

“Ultimately, this is a story about a lack of supply in the face of strong demand – similar to the story for much of the last ten years but particularly acute right now as the economy rebounds.”

The Daft report suggests that people are moving back towards Dublin as the pandemic recedes – with rents in the capital now increasing at the fastest rate in the country.

Rents by 4.1% in Dublin between September and December, compared to just 05% in Munster.

Rents in the most and least expensive areas. Image: Daft

Mr Lyons said the "unprecedented scarcity" of rental homes will lead to further increases this year.

“If you look at the market as a whole, there are about 1,400 rental ads live at the moment and that compares to the pre-pandemic level of maybe 3,000 or 4,000 and that was low relative to what had happened over the previous decade," he said.

“So, we are in a period of unprecedented scarcity of rental homes. That suggests rents are going to continue to increase but the level of rent is already high relative to people’s incomes so it is hard to see how those two things can continue.”

In a statement, housing charity Threshold said the figures suggest a blatant disregard of the Rent Pressure Zone (RPZ) legislation.

It noted that rent increases of between 6% and 11% should not be possible in areas where they should be limited to either general inflation or 2% - whichever is lower.

Threshold CEO John-Mark McCafferty said urged all renters to contact the charity when they receive a rent review from their landlords.

“This report reflects the trends witnessed by Threshold advisors, who found approximately half of the rent review notices brought to them in 2021, were invalid,” he said.

“Unfortunately, in some cases, the tenant accepts the invalid notice for fear of being unable to find a new rental home.

“Threshold urges all private renters to get in touch when they receive a rent review to check the validity of the rent increase.”

Mr McCafferty warned that as the cost of living continues to rise people will increasingly be unable to pay their bills and, as they prioritise their rent, they will be forced to go without heating and other essentials.