A record 760 patients are waiting for a bed in Ireland’s hospitals this morning according to th...

A record 760 patients are waiting for a bed in Ireland’s hospitals this morning according to the Irish Nurses and Midwives Organisation.

The nursing union said it is the worst figure it has ever recorded – up 46 on the previous high recorded during the ‘Beast from the East’ storm in March 2018.

Visiting restrictions have been put in place at six separate hospitals around the country in an effort to prevent the spread of the flu.

Hospitals in Waterford, Limerick, South Tipperary and Cork have all placed put a visitor plan in place.

Elective surgeries have also been cancelled in some locations and the public are being urged to visit their GP if they have flu-like symptoms.

In response the Health Minister Simon Harris says 50 beds will open today and 199 will open by the end of the month.

He says he met with the HSE earlier today to discuss their response to the situation and told them "we are willing as a government to do whatever it takes to provide our hospitals with support during this difficult period".

There are 760 people on trolleys today.

199 in total by the end of January. pic.twitter.com/1Ez5m3vytp

The Irish Nurses and Midwives Organisation also recorded its highest-ever figure for a single hospital this morning – with 92 patients waiting for a bed in University Hospital Limerick.

In a statement, the INMO said there were more patients waiting around the country than it would take to fill St James’s Hospital in Dublin to capacity.

The worst-hit hospitals were:

INMO General Secretary Phil Ní Sheaghdha said the HSE must adopt a nationwide major incident protocol to get to grips with the crisis – similar to the one that was put in place in 2018.

“Our members are working in impossible conditions to provide the best care they can.

“The excuse that this is all down to the flu simply doesn’t hold. There are always extra patients in winter but we simply do not get the extra capacity to cope.

“This is entirely predictable, yet we seemingly fail to deal with it every year.”

Highest number on record: No beds for 760 admitted patients this morning, with a record *92* people waiting on trolleys in UH #Limerick. At 8am there were also 56 people on trolleys in #Cork UH and 47 people in UH #Galway.

She said the major incident protocol should see elective surgeries cancelled, non-emergency admissions stopped and extra bed capacity sourced from wherever it can be found.

“We also need to immediately scrap the HSE’s counterproductive recruitment pause – which is leaving these services understaffed and thus overcrowded,” she said.

“Behind these numbers are hundreds of individual vulnerable patients – it is a simply shameful situation.

“This is entirely preventable if proper planning was in place.”

The INMO said the overcrowding also increases the risk of infection among patients and called on the HSE to implement an infection control plan. 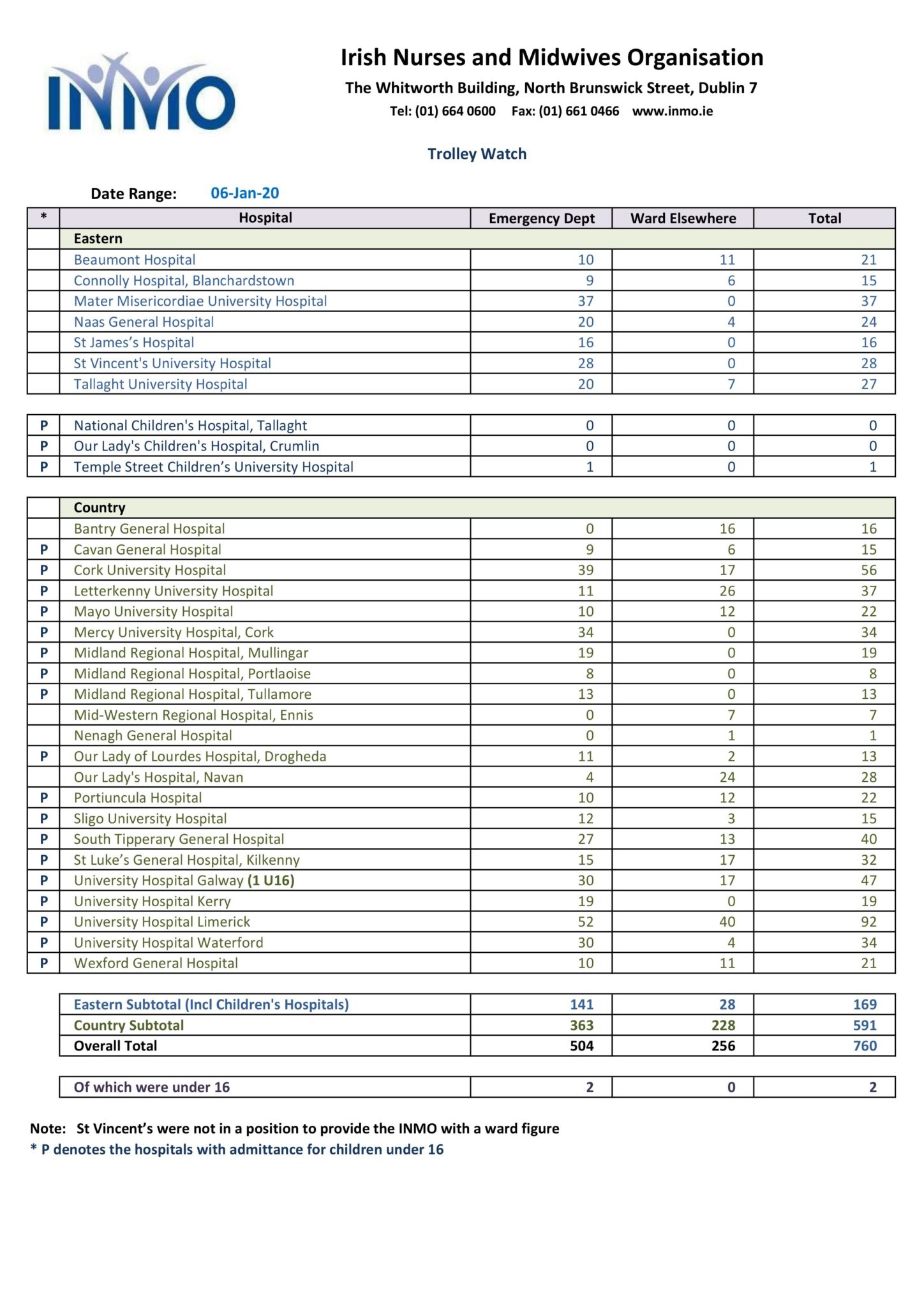