Over 4,080 women had delayed CervicalCheck results communicated to them as a result of an IT prob...

Over 4,080 women had delayed CervicalCheck results communicated to them as a result of an IT problem at a US lab, according to a review of the issue.

The report, which has been published this afternoon, recommends significant changes to how the national screening programme operates.

The HSE ordered the ‘rapid review’ after it was revealed that results were not sent out to over 800 women due to a technical problem at one of the US labs hired to process the smears.

However, the investigation has now found the total number affected is over 4,080.

For nearly 900 women it meant their results weren't issued to them - or their GP in many cases.

In the other 3,200 cases, meanwhile, doctors got the letters but the women did not.

According to Professor Brian MacCraith's report, the addition of Quest Diagnostic's Chantilly lab in the US as a CervicalCheck test facility "took place without proper operation due diligence" and risk assessment.

It also finds there was a "gross underestimation of the scale and implications of the problem".

Within CervicalCheck itself, Prof MacCraith says there are too few people managing too many significant projects simultaneously.

During the review, Prof MacCraith says there was a "constant theme" of women being frustrated by poor service and a lack of information.

He writes: "My engagement with this review caused me to discover multiple examples of women (in person, via social media, Parliamentary Questions etc.) frustrated not only by delays in receiving their results but more so by the lack of any clarifying or contextual information." 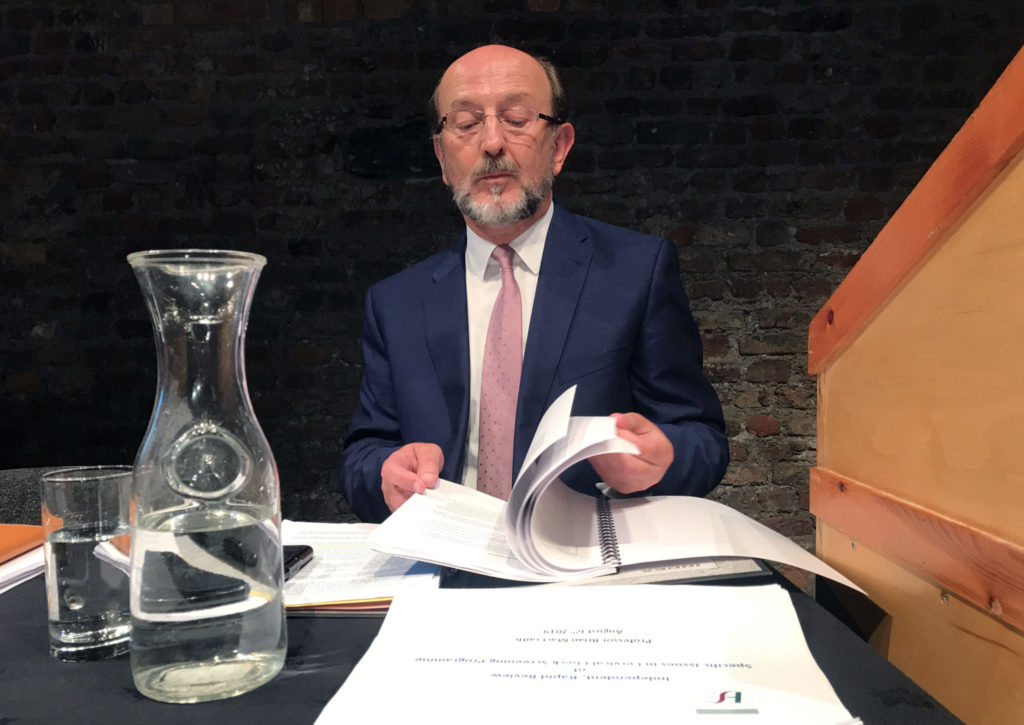 6/8/2019 Professor Brian MacCraith talks to the media in the Smock Alley Theatre, Dublin about how he examined the series of events within the HSE CervicalCheck Programme

According to the report, an 'almost total reliance' on an outsourced and international lab service provider is a "source of significant fragility" for the CervicalCheck programme.

However, it stresses there are also "highly engaged and committed" staff working in the programme.

The report recommends major changes to the screening programme - including the possible introduction of a new tracking system for smear tests.

It suggests that recruitment for a strengthened CervicalCheck programme "needs to be given the highest priority", and that a 'women first' approach needs to be adopted.

It recommends the State develops a National Laboratory for Cervical Testing to avoid relying on outsourcing of tests.

In a statement today, Mr Reid thanked all the women - including 'Sharon', who first raised the issue in the media - for ensuring the matter was brought into the public domain.

He said: "Their determination will ensure that we have a better screening service in the future.

"While much work and many improvements have taken place in the CervicalCheck service over the past 15 months, it is unacceptable that women should have to wait so long for important information about their health."

Mr Reid said the executive 'accepts entirely' the findings of Prof MacCraith's review, and committed to the implementation of each of the recommendations.

He added: "On foot of Professor McCraith’s report, I have set out a number of immediate actIons including; Strengthening the management, leadership and organisation of CervicalCheck; developing a culture of putting women first; establishing a clinical evaluation and assessment of the women impacted; establish an audit of Quest’s IT processes and interfaces.”

Speaking in Belfast this afternoon, the Taoisaech Leo Varadkar said he continues to have confidence in the CervicalCheck programme and warned that it remains vitally important for the women of Ireland.

"I do have confidence in the service - CervicalCheck, BreastCheck, the colorectal cancer screening programme - work," he said.

"Everyone knows the difference I think at this stage between screening and diagnosis but we know that those programmes have saved a lot of lives and they have also helped pick up a lot of cancers early, meaning that people got treatment earlier."

He was tasked with examining "all aspects" of the issue, with a particular focus on communication.

He was asked to inform the HSE if any "immediate risks or safety concerns" were identified.

Its findings focus on when the HSE discovered the issue, when the Department of Health was informed and when Minister Simon Harris was told.