Three PSNI officers have been injured during clashes with a small crowd near a bonfire site in no...

Three PSNI officers have been injured during clashes with a small crowd near a bonfire site in north Belfast.

Dozens of officers in riot gear moved into the New Lodge estate this morning in a bid to facilitate the removal of materials.

The bonfire is due to be lit tonight marking the anniversary of the introduction of internment without trial.

However, the pyre has been placed on Department for Infrastructure land - and contractors were tasked with removing the fire materials.

Items including barricades and bricks were thrown at officers earlier - knocking several to the ground and injuring three.

The extent of the officers' injuries remain unclear.

Police have now withdrawn from the area. 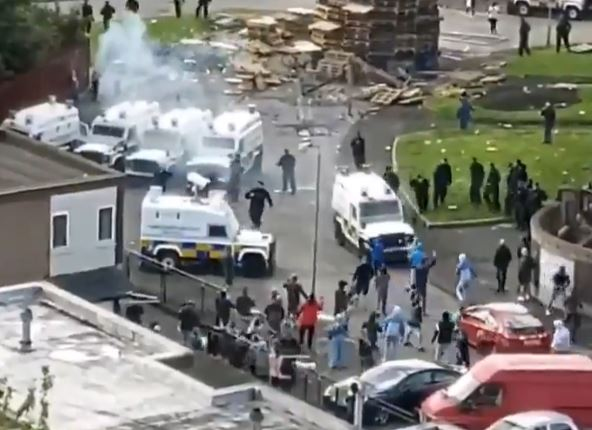 Handout screengrab from a video taken with permission from the Twitter feed of @bimopodcast of unrest next to a bonfire in north Belfast, which contractors have been ordered to remove. A stand-off has developed between police and those supporting the bonfire, and a number of missiles have been thrown at officers. Picture by: Bimopodcast/PA Wire/PA Images

PSNI Assistant Chief Constable Alan Todd said they decided to dial down the policing operation after assessing the situation.

He explained: "With a large number of women, children and young people in the area, we decided to that we can no longer sustain a policing operation due to the significant risk to public safety and in particular, to innocent bystanders.

“It is our assessment that the majority of local residents do not want this bonfire.

"I apologise for the inconvenience today’s operation has caused and for not being able to deliver our objective of supporting the removal of the bonfire. I hope that the local community understands my primary concern today was public safety."

A 13-year-old boy has been arrested on suspicion of 'riotous and disorderly contact'.

Main image: Police at the scene of a bonfire in north Belfast, which contractors have been ordered to remove. Picture by: Niall Carson/PA Wire/PA Images