British Prime Minister Boris Johnson's plan to suspend parliament has been met with protests, as ...

British Prime Minister Boris Johnson's plan to suspend parliament has been met with protests, as well as pledges by opposition parties to fight the move.

Yesterday, the Queen approved the plan to suspend parliament in the week beginning September 9th until October 14th.

Mr Johnson has insisted it's simply to allow for a new 'Queen's speech' - a traditional event which details the legislative agenda of a new government.

However, the suspension will significantly reduce parliamentary sitting time in the lead-up to the planned Brexit date of October 31st.

In particular, it has raised fears among no-deal opponents that it could impact their time to introduce legislation aiming to block a hard exit from the EU - a suggestion Mr Johnson has claimed is "completely untrue".

Mr Johnson has repeatedly claimed that he still aims to strike a deal with the EU; however, he also insists that in order for this to happen the Brexit border backstop must be removed from the deal.

The EU has consistently warned that the backstop must remain unless and until an alternative that provides the same level of protection against the return of border infrastructure to Ireland.

In a tweet this afternoon, the EUs chief Brexit negotiator Michel Barnier said it is the EUs responsibility to protect the "conditions for peace and stability on the island of Ireland."

PM @BorisJohnson has said that the UK will leave the EU on 31 Oct. In all circumstances, the EU will continue to protect the interests of its citizens and companies, as well as the conditions for peace and stability on the island of Ireland. It is our duty & our responsibility.

The decision to 'prorogue' parliament for several weeks has been widely described as 'undemocratic', with House of Commons Speaker John Bercow calling it a "constitutional outrage".

A number of Conservative rebels - including former chancellor Philip Hammond - are among those who've publicly opposed the move.

Scottish Conservative leader Ruth Davidson quit her role this morning citing family reasons - but acknowledged she has "not hidden the conflict I have felt over Brexit." 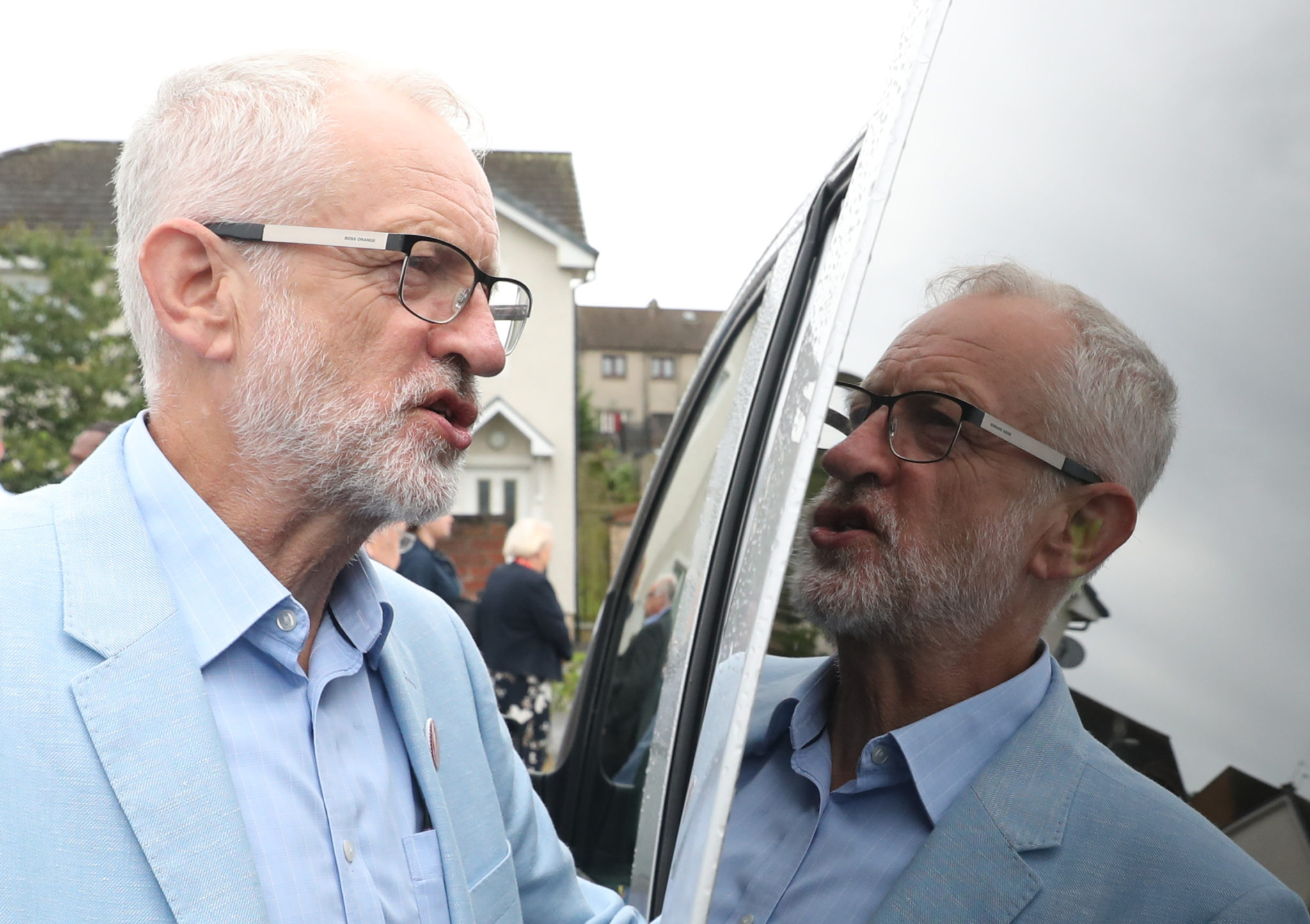 This afternoon, Labour leader Jeremy Corbyn said he would move to prevent the suspension in Parliament next week.

"What we are going to do is try to politically stop him on Tuesday with a Parliamentary process in order to legislate to prevent a no-deal Brexit," he said.

"And also to legislate to try and prevent him shutting down Parliament during this absolutely crucial period.

Yesterday evening, thousands of people took to the streets in London and around the UK in opposition to the government's plan.

In London, demonstrators gathered outside Westminster and Downing Street - with activists pledging that the hastily arranged efforts were 'just the beginning'. 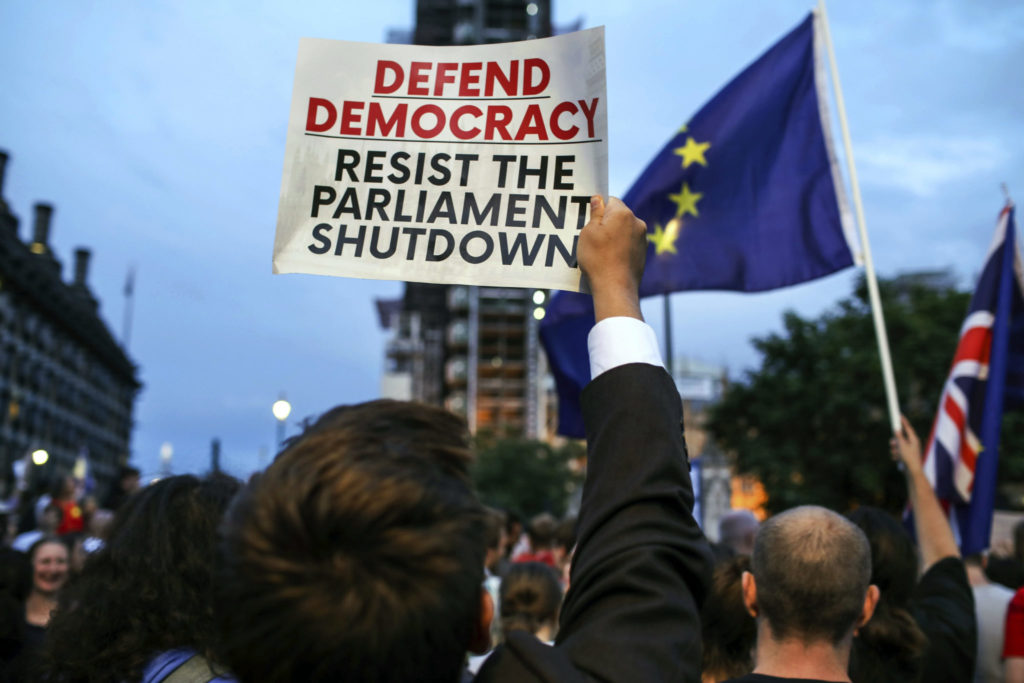 Anti-Brexit supporters take part in a protest in front of the Houses of Parliament in central London, Wednesday, Aug. 28, 2019 (AP Photo/Vudi Xhymshiti)

Meanwhile, a parliamentary petition opposing the planned proroguing has reached more than 1.16 million signatures in less than 24 hours.

Amid the backlash, senior Tories have been moving to defend Mr Johnson's move.

The hardline Brexiteer and House of Commons leader Jacob Rees-Mogg suggested Mr Johnson was simply "respecting the will of the voters" who backed Brexit in 2016.

Writing in The Telegraph, he argued: “There is no constitutional crisis except that caused by those who voted for the referendum, then supported the use of Article 50 and backed the Withdrawal Act.

“Every one of these had comfortable Parliamentary majorities, often backed by those who now cry out that following a plebiscite is undemocratic. This is untrue and unconstitutional.”

Opposition parties have pledged to fight Mr Johnson's move, with Labour leader Jeremy Corbyn saying "we're doing everything we can to stop Boris Johnson's smash and grab against our democracy".

Legal challenges are also expected, with a number of pro-Remain MPs confirming they've requested an immediate hearing in the Scottish courts.

Don’t panic! We have asked the Scottish court for a hearing tomorrow on the legality of this purported suspension of Parliament & we’re confident we’ll be heard this week #NoDeal #Brexit #Prorogation #Cherrycase pic.twitter.com/Q1UvA7EJjl

Lawyers for campaigner Gina Miller have also confirmed they're seeking a judicial review in the UK's high court.

Meanwhile, Raymond McCord, a victim's rights campaigner in the North, has launched a third legal bid in Belfast, arguing that a no-deal Brexit would breach the Good Friday Agreement.

Lawyers said they are seeking an urgent injunction to compel Mr Johnson to reverse his advice to Queen Elizabeth II to prorogue Parliament.

WTA suspend events in China over disappearance of Peng Shuai

Garda 999 calls scandal has not undermined confidence in force - McEntee