Britain's Queen Elizabeth II has approved a request by its Prime Minister Boris Johnson to suspen...

Britain's Queen Elizabeth II has approved a request by its Prime Minister Boris Johnson to suspend parliament from the middle of next month, which will restrict MPs' ability to block a no-deal Brexit.

In a move prompting a furious political row there, the UK parliament will be suspended in the week beginning September 9th until October 14th.

This is the date on which a new 'Queen's speech' - a traditional event which details the legislative agenda of the parliament - will be held.

Britain has set a Brexit deadline, with or without a deal, of October 31st.

Queen Elizabeth II approved the British government's request at a meeting of the privy council - a body of advisers - at Balmoral Castle in Scotland, on Wednesday.

The move will see the British parliament lose a number of sitting days prior to the UK's scheduled departure from the EU.

Asked if he was denying opposition MPs the time to stop a no-deal Brexit, Mr Johnson said: "No, that is completely untrue.

"We are bringing forward a new legislative programme on crime, hospitals, making sure we have the education funding we need." 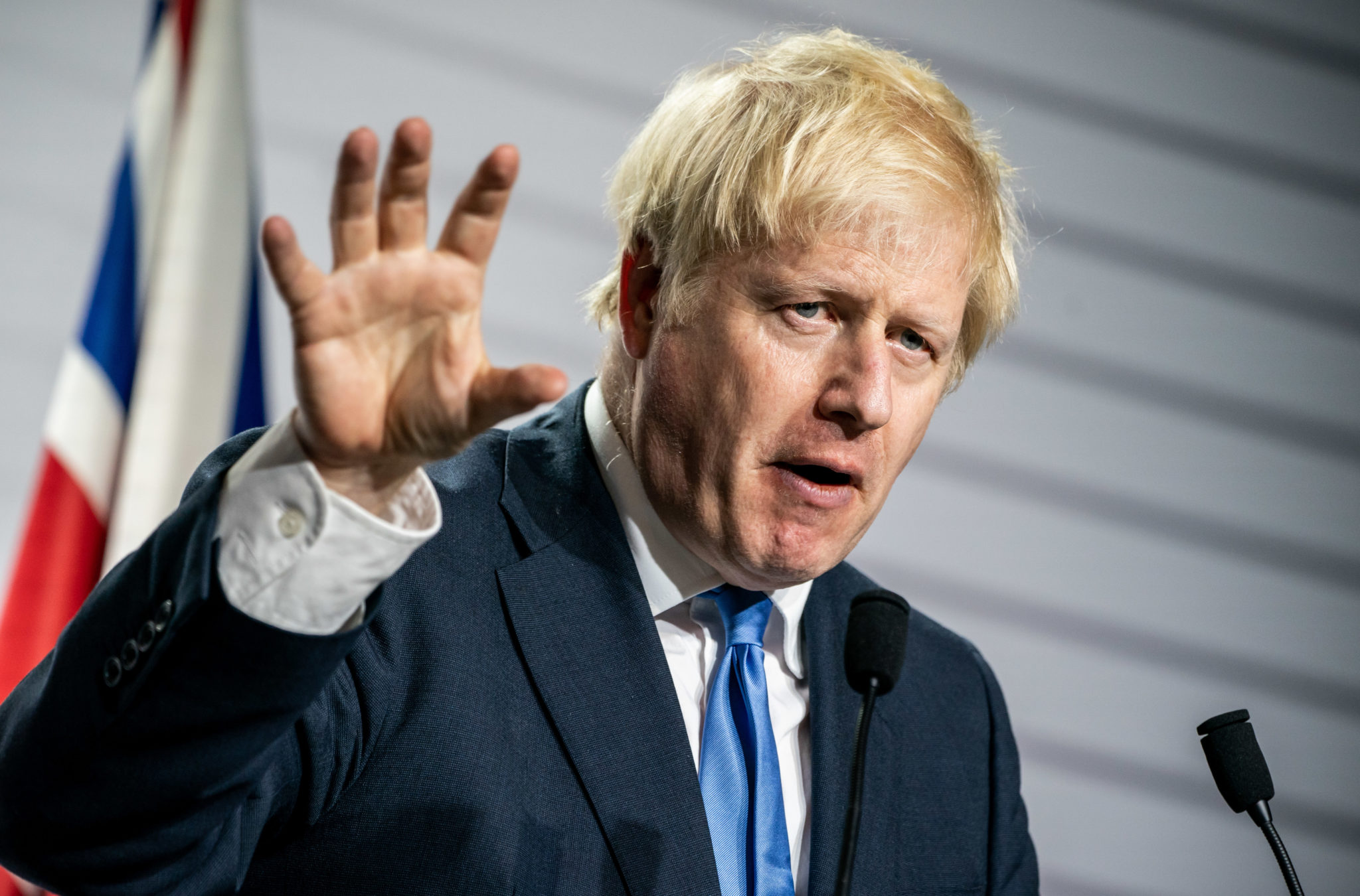 He added there would be "ample time" for MPs to debate Brexit both before and after a "crucial" Brussels summit of EU leaders on October 17th.

Conservative Party chairman James Cleverly also downplayed the significance of the action, claiming the government was planning a Queen's speech "just as all new governments do".

But former UK chancellor Philip Hammond called the suspension of parliament "profoundly undemocratic" at a time of "national crisis" and said efforts to stop a no-deal Brexit will now be brought forward.

"We are determined that parliament will show its resolve to prevent a no-deal Brexit," he said.

"To be perfectly frank, a number of my colleagues would have preferred to wait until the 30 days that the prime minister has talked about was up and move in late September.

"That will now not be possible, we will have to try and do something when parliament returns next week."

It would be a constitutional outrage if Parliament were prevented from holding the government to account at a time of national crisis. Profoundly undemocratic.

Northern Ireland's DUP - who prop up the Conservative government at Westminster - welcomed the announcement, prior to which their confidence and supply agreement with the Conservatives will be reviewed.

Scottish First Minister Nicola Sturgeon urged MPs to work together to stop any such plan.

So it seems that Boris Johnson may actually be about to shut down Parliament to force through a no deal Brexit. Unless MPs come together to stop him next week, today will go down in history as a dark one indeed for UK democracy. https://t.co/68lFnEgiyr

Conservative MP Dominic Grieve, who has strongly opposed a no-deal Brexit, said it would be an "outrageous act" and could prompt a vote of no confidence in Mr Johnson.

He told BBC Radio 5: "If the prime minister persists with this, and doesn't back off, and we're not able to make him back off... then I think really is that his administration will collapse.

"I will certainly vote to bring down a Conservative government if the prime minister persists in following a course of action which is so unconstitutional."

House of Commons Speaker John Bercow claimed it was "blindingly obvious that the purpose of prorogation now would be to stop parliament debating Brexit and performing its duty in shaping a course for the country".

He called it a "constitutional outrage". 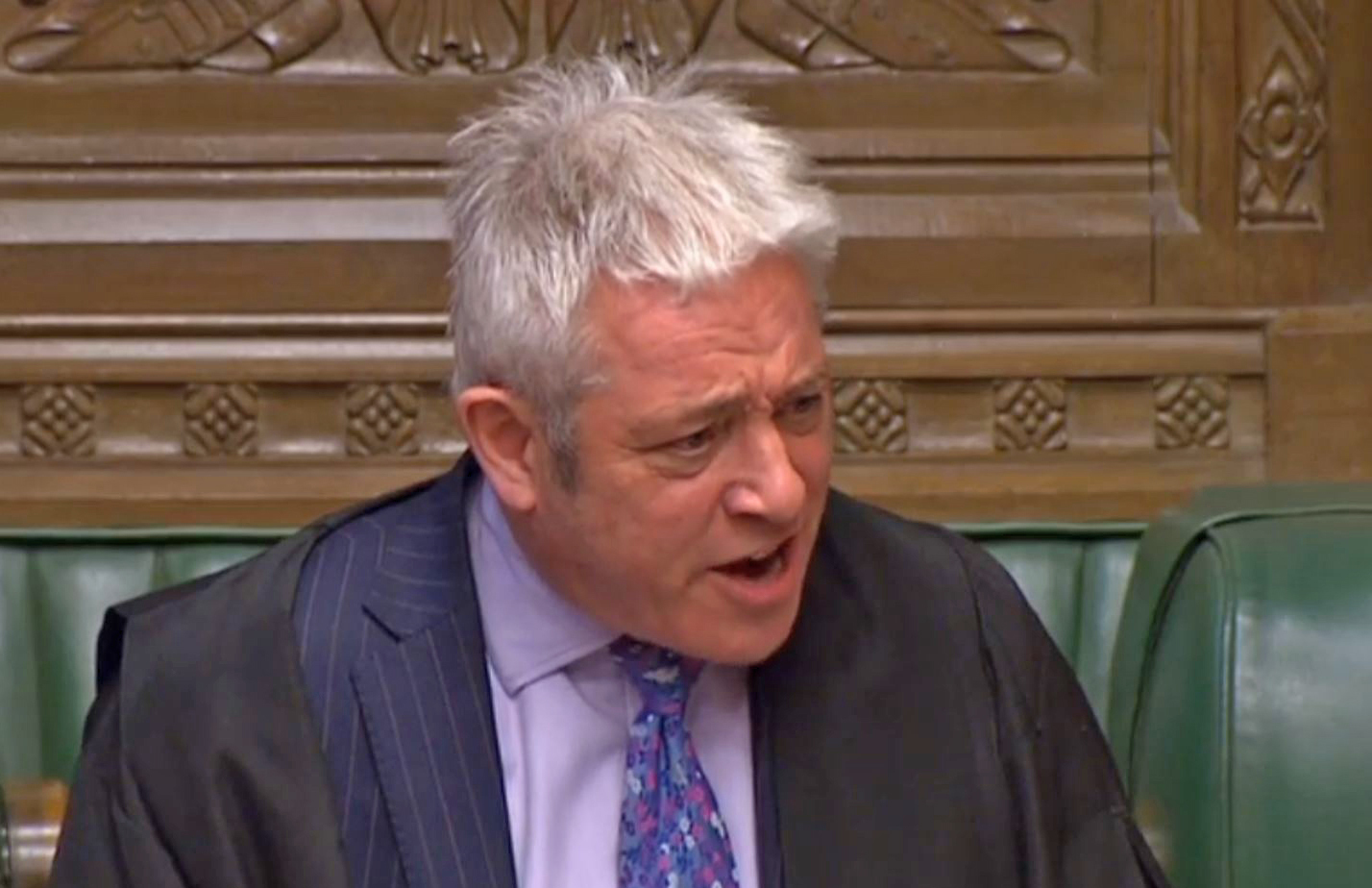 UK Labour leader Jeremy Corbyn said: "I am appalled at the recklessness of Johnson's government, which talks about sovereignty and yet is seeking to suspend parliament to avoid scrutiny of its plans for a reckless no deal Brexit.

"This is an outrage and a threat to our democracy.

"That is why Labour has been working across parliament to hold this reckless government to account, and prevent a disastrous no deal which parliament has already ruled out.

"If Johnson has confidence in his plans he should put them to the people in a general election or public vote."

Mr Corbyn met on Tuesday with a coalition of party leaders and senior MPs opposed to no deal.

The group agreed they should focus on trying to pass legislation forcing the prime minister to seek a further extension to the Article 50 negotiating Brexit - thereby delaying the UK's exit beyond October 31st - in order to avoid no deal.

Mr Corbyn had originally planned to table a no-confidence motion in Mr Johnson's government soon after MPs return to Westminster from their summer break next week.

He had appeared to shelve this plan following Tuesday's meeting, but could now return to the effort to oust Mr Johnson.

Brexit Party leader Nigel Farage predicted such a scenario, posting on Twitter: "The government's announcement today makes a confidence motion now certain, a general election more likely and is seen as a positive move by Brexiteers."

If he does, then The Brexit Party will fight him every inch of the way. But if he now wants a clean break Brexit then we would like to help him secure a large majority in a general election.

His party leader, Jo Swinson, said: "Shutting down Parliament would be an act of cowardice from Boris Johnson.

"He knows the people would not choose a no deal and that elected representatives wouldn't allow it. He is trying to stifle their voices." 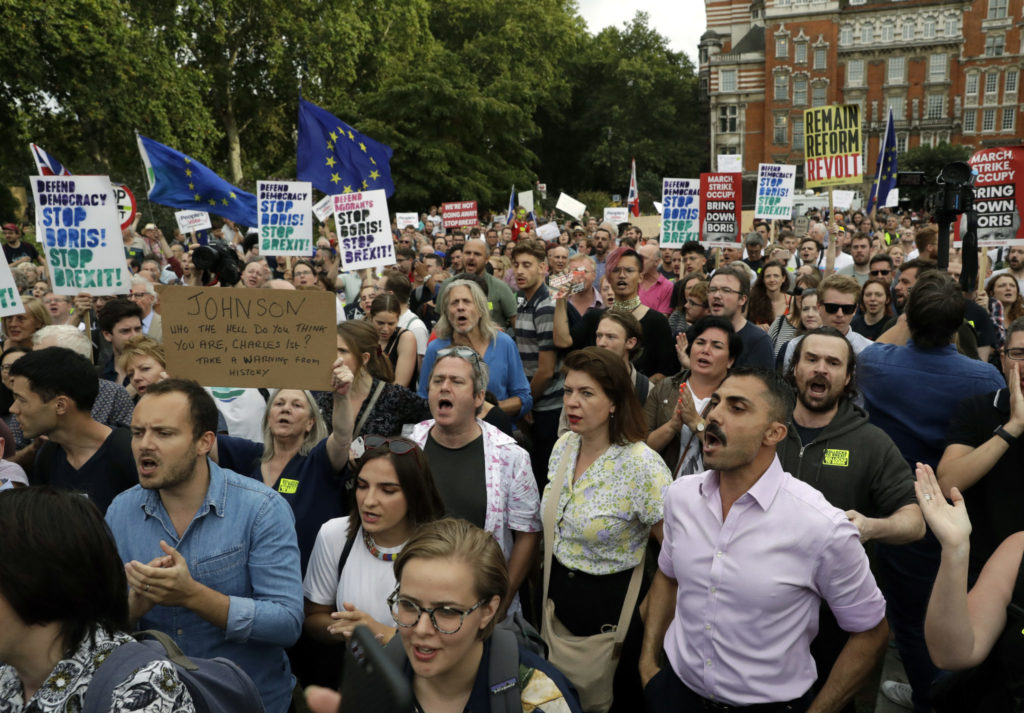 Anti-Brexit supporters take part in a protest near the Houses of Parliament in London | Image: Matt Dunham/AP/Press Association Images

A number of protesters gathered outside the Houses of Parliament at Westminster on Wednesday evening, with reports they were planning to move to Downing Street.