Buckingham Palace said she "died peacefully" on Thursday afternoon at Balmoral in Scotland.

President Higgins said he learned of her death "with profound regret and a deep personal sadness".

"On behalf of the people of Ireland, may I express my heartfelt sympathy to His Majesty King Charles and to the Royal Family on their very great personal loss.

"May I offer my deepest condolences to the British people and to the members of the Commonwealth on the loss of a unique, committed and deeply respected Head of State."

"As President of Ireland, I recall the exceptional hospitality afforded to Sabina and myself by the Queen and the late Prince Philip on our four day State Visit to Britain in 2014.

"Together we celebrated the deeply personal interconnection between the Irish and British people, a connection embodied by the hundreds of thousands of families who have moved between our shores over the centuries." 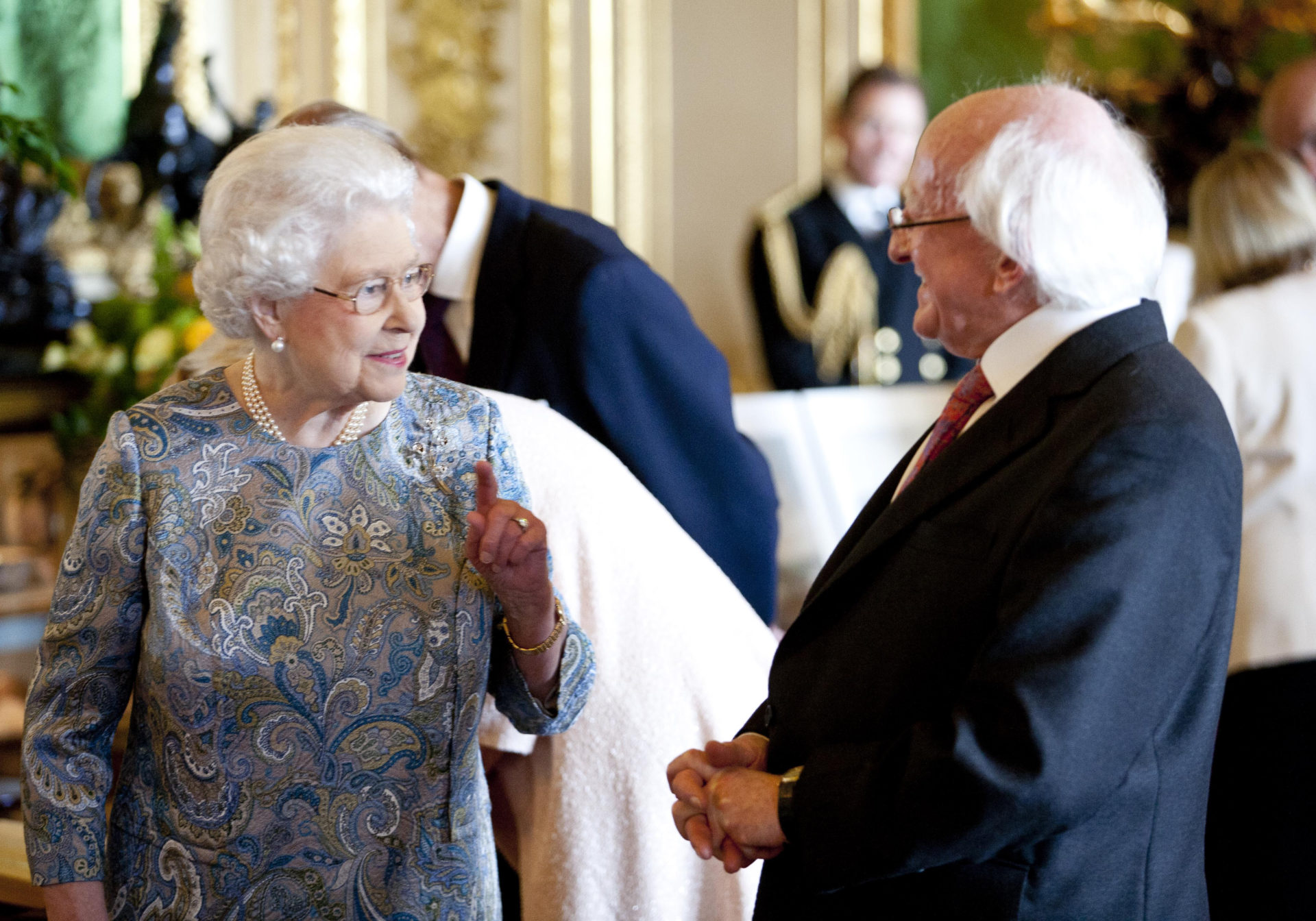 President Michael D Higgins with Britain's Queen Elizabeth II viewing a display of Irish items from the Royal Collection in the Green Drawing Room at Windsor Castle during a visit in April 2014. Picture by: RollingNews.ie/Aras An Uachtarain

On her State Visit to Ireland in 2011, he said: "Queen Elizabeth’s visit was pivotal in laying a firm basis for an authentic and ethical understanding between our countries.

"During those memorable few days 11 years ago, the Queen did not shy away from the shadows of the past.

"Her moving words and gestures of respect were deeply appreciated and admired by the people of Ireland and set out a new, forward looking relationship between our nations – one of respect, close partnership and sincere friendship."

Taoiseach Michael Martin said he wanted to send "deepest sympathy to His Majesty King Charles, the Royal Family, the UK Government and the British people on the loss of their beloved monarch, Her Majesty Queen Elizabeth."

"The Queen’s reign was one of historic duration, immense consequence and a focus of respect and admiration around the world. Her dedication to duty and public service were self-evident and her wisdom and experience truly unique."

Mr Martin said her passing "is indeed the end of an era.

"Her State Visit to Ireland in 2011 marked a crucial step in the normalisation of relations with our nearest neighbour.

"That visit was a great success, largely because of the many gracious gestures and warm remarks made by the Queen during her time in Ireland."

"Her popularity with the Irish people was also very evident and clearly made a very positive impact on the Queen.

"In particular, I recall the warmth of the welcome she received from the public in Cork during her walkabout at the English Market", Mr Martin added.

"Our world is a poorer place for her passing but a far richer and better place as a result of her long life and enduring contribution", he said.

Tánaiste Leo Varadkar said: "From our perspective, she will always be remembered as the first British monarch to visit an independent Ireland, a visit which was a watershed moment on the long road to reconciliation.

"Symbolism matters, and the visit showed that it is possible to move beyond a painful history, and use our shared experiences to build a new future in a spirit of hope and forgiveness.

"From a British perspective, she was their longest-reigning monarch, and a much-loved and respected head of State."

"Her life was one of ongoing dedication, of service to her people, and to the Commonwealth which flourished under her watch.

"Her workload was the stuff of legend - as late as Wednesday evening, she was scheduled to meet with her Privy Council to discuss affairs of State", Mr Varadkar said.

While Foreign Affairs Minister Simon Coveney said: "She epitomised that generation of British people who endured the Second World War with both bravery and stoicism.

"Her long reign, the longest in British history, saw profound change affecting virtually every aspect of politics and society.

"Throughout her reign, the Queen was a constant and reassuring presence in British life."

"Through our embassy in London, I have conveyed deepest sympathies to His Majesty, King Charles, the Royal family more generally and to all the British people on their sad loss.

"While they grieve that loss, they also can give thanks for a long life of public service lived to the full with immense dignity", Mr Coveney added.

And Sinn Féin leader Mary Lou McDonald said: "I wish to extend deepest sympathy to the British Royal Family on the death of Queen Elizabeth II.

"Her passing marks the end of an era.

"Relationships between our two countries for so long marked by conflict and suffering have been recast and reimagined through the Good Friday Agreement.

"The Queen proved a powerful advocate and ally of those who believe in peace and reconciliation.

"I salute her contribution to the huge change that has evolved in recent years.

"Her death is a moment of heartbreak and pride for the British people.

"To them, and especially to Irish unionists, I extend on behalf of Sinn Féin and Irish Republicans sincere condolences", Ms McDonald said.

Main image: President Michael D Higgins and Britain's Queen Elizabeth II prior to a state banquet at Windsor Castle during a visit in April 2014. Picture by: RollingNews.ie/Aras An Uachtarain