A fourth person has been arrested over the deaths of 39 people found in a lorry container in Esse...

A fourth person has been arrested over the deaths of 39 people found in a lorry container in Essex in England.

The arrested man is 48-years-old and from Northern Ireland.

A 25-year-old Northern Ireland man, the driver of the lorry, remains in custody on suspicion of murder.

A warrant to extend his detention was granted on Thursday.

On Wednesday night, police began the movement of the victims from the Port of Tilbury to the a mortuary at Broomfield Hospital.

The bodies were found after the truck parked up at an Essex industrial estate in the early hours of Wednesday morning.

The Vietnamese embassy in the UK today said it has been contacted by some families to ask police if any of the 39 people found dead are from the country.

The embassy said it had "received requests from some Vietnamese families asking for the Embassy’s help verify whether their family members were among the victims".

However, it said it has yet to receive any official confirmation from British authorities.

It comes amid reports that a Vietnamese woman is feared to be among those found dead.

Tra My has been named as one of the possible victims by a member of a Hanoi-based human rights group.

The 26-year-old reportedly sent a series of messages to her family at around the time the container was in Essex.

Translated, the texts read: "I'm sorry Mom. My path to abroad doesn't succeed. Mom, I love you so much! I'm dying bcoz I can't breath...I'm from Nghen, Can Loc, Ha Tinh, Vietnam... I am sorry, Mom".

It has, however, yet to be confirmed whether Tra My was among those discovered in the lorry earlier this week.

It was initially believed the 31 men and eight women who were found dead in the trailer were Chinese.

In an update this evening, Essex Police Deputy Chief Constable Pippa Mills said the situation is now a "developing picture".

She added: "The force will not be commenting on any speculation about the nationalities of those who have tragically lost their lives.

"I will not be drawn on any further detail until formal identification processes approved by [the coroner] have taken place."

She urged anyone with any information to contact them, even if they are in the UK illegally.

She stressed: "I can assure you that your information will be received in the strictest confidence, and no criminal action will be taken against you."

The Chinese embassy has sent a team to Essex; however, the country’s ambassador has said it is too early to confirm their nationalities.

Police have carried out searches at three addresses in Co Armagh as part of the investigation.

The tractor unit of the truck is believed to have travelled to Britain from Northern Ireland, before picking up the trailer at the docks in the Thurrock area and transporting it to Essex.

Police were alerted shortly after 1.40am.

Investigators said the trailer arrived in the UK by ferry from the port of Zeebrugge in Belgium just over an hour earlier. 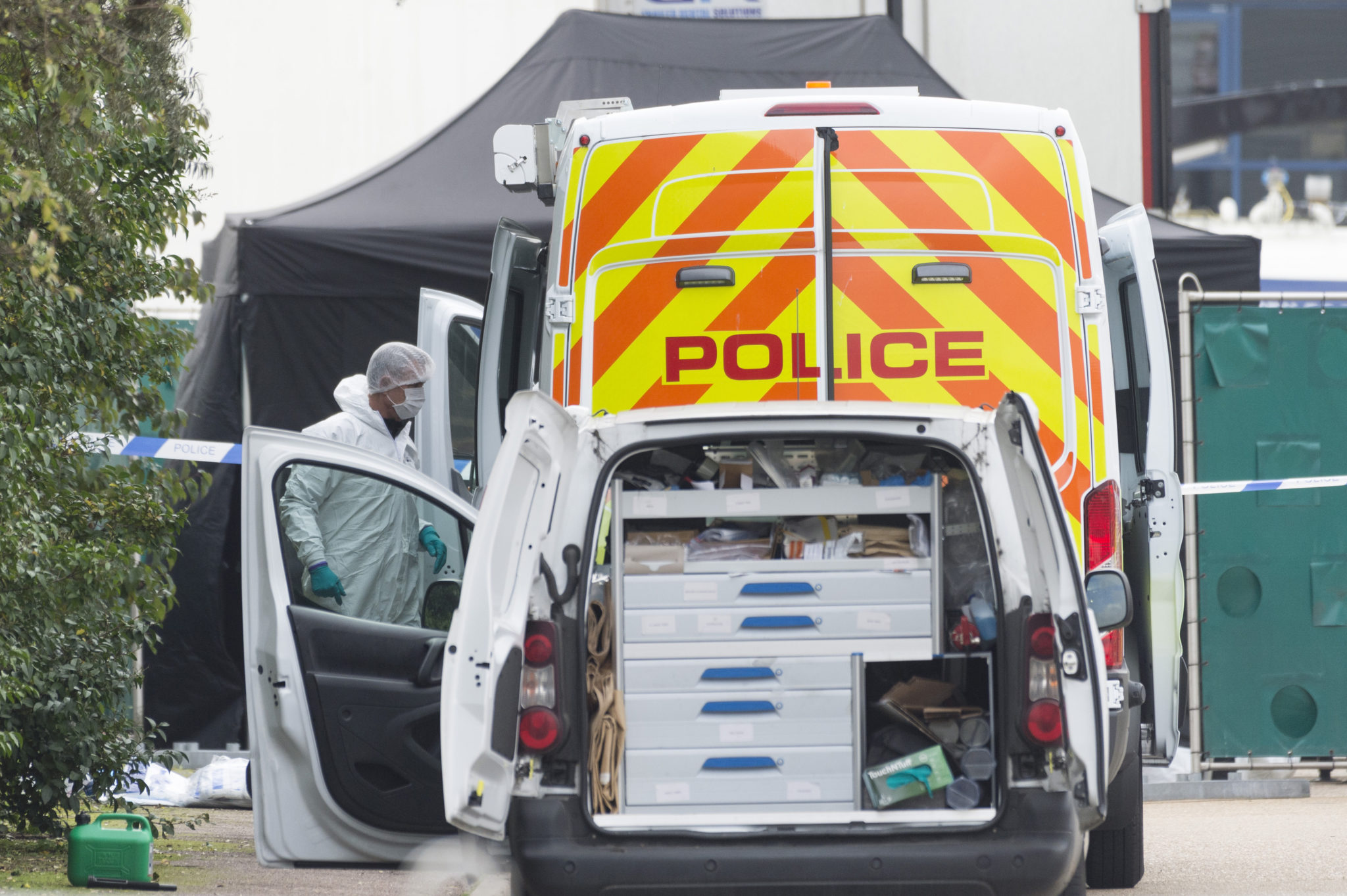 A police forensic officer at the scene after 39 bodies were found in a shipping container at Waterglade Industrial Park in Essex, 23-10-2019. Image: Ray Tang/Xinhua News Agency/PA Images

The container is owned by Irish company Global Trailer Rentals.

The company said it rented it out on October 15th. The company is has said it is “gutted” by the news and has pledged to assist police.

The company’s trailers are fitted with GPS tracking systems that can also monitor the temperatures inside refrigeration units.

It is hoped the GPS data will shed some light on where the container was before it left Belgium for the just before 3.00pm on Tuesday afternoon.

The Belgian public prosecutor's office has said it is “not yet clear” when and where the victims were placed in the container, adding that no further information would be released at this time. 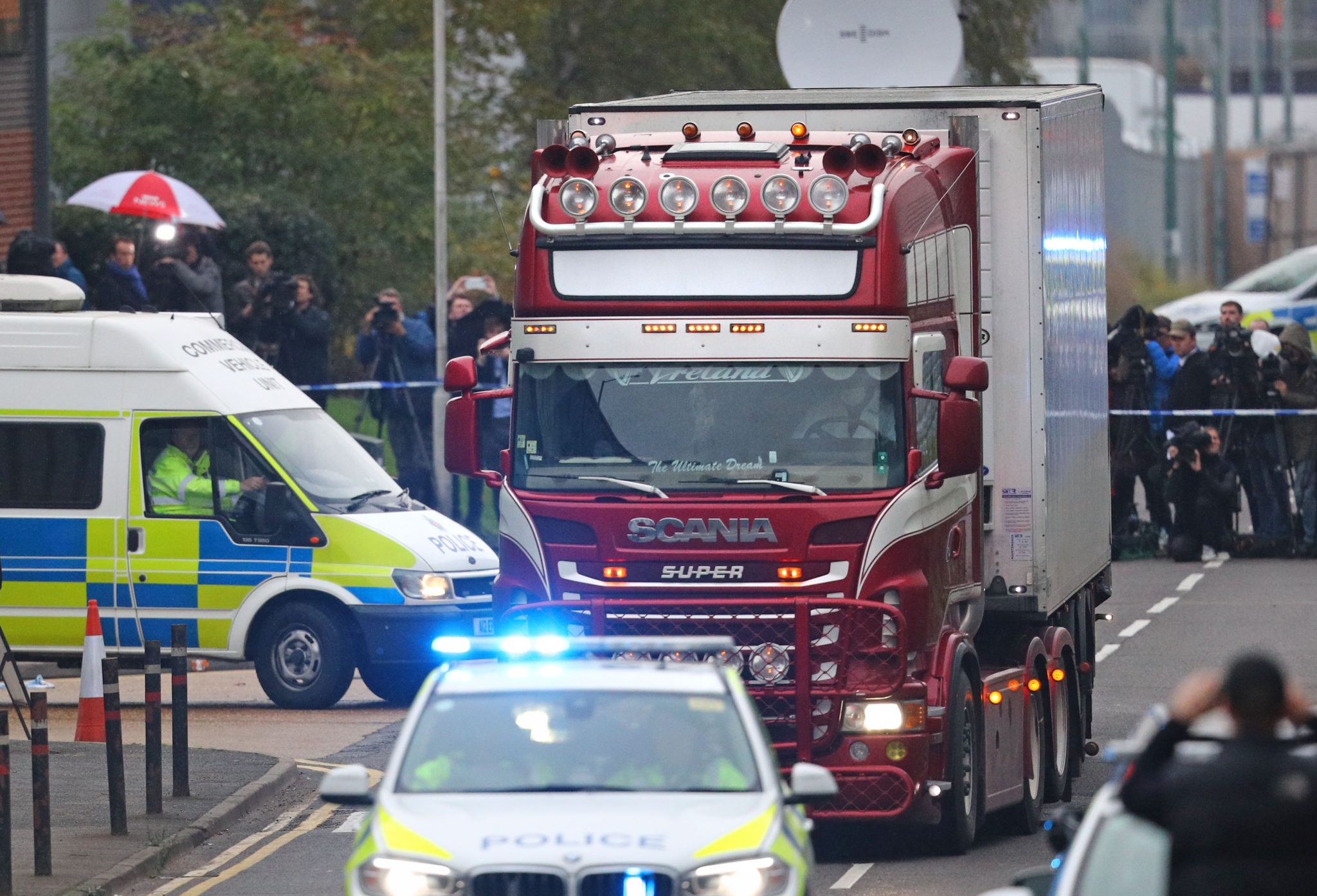 The family of the 25-year-old driver of the truck are said to be “stunned” by the news and remain hopeful his arrest was a “complete and utter mistake.”

Portadown councillor Paul Berry told Sky News that they learned of the arrest through the media.

“The community's thoughts and prayers are with the family of the 39 people who have lost their lives,” he said.

“People are devastated but also stunned and shocked that someone local has been arrested.” 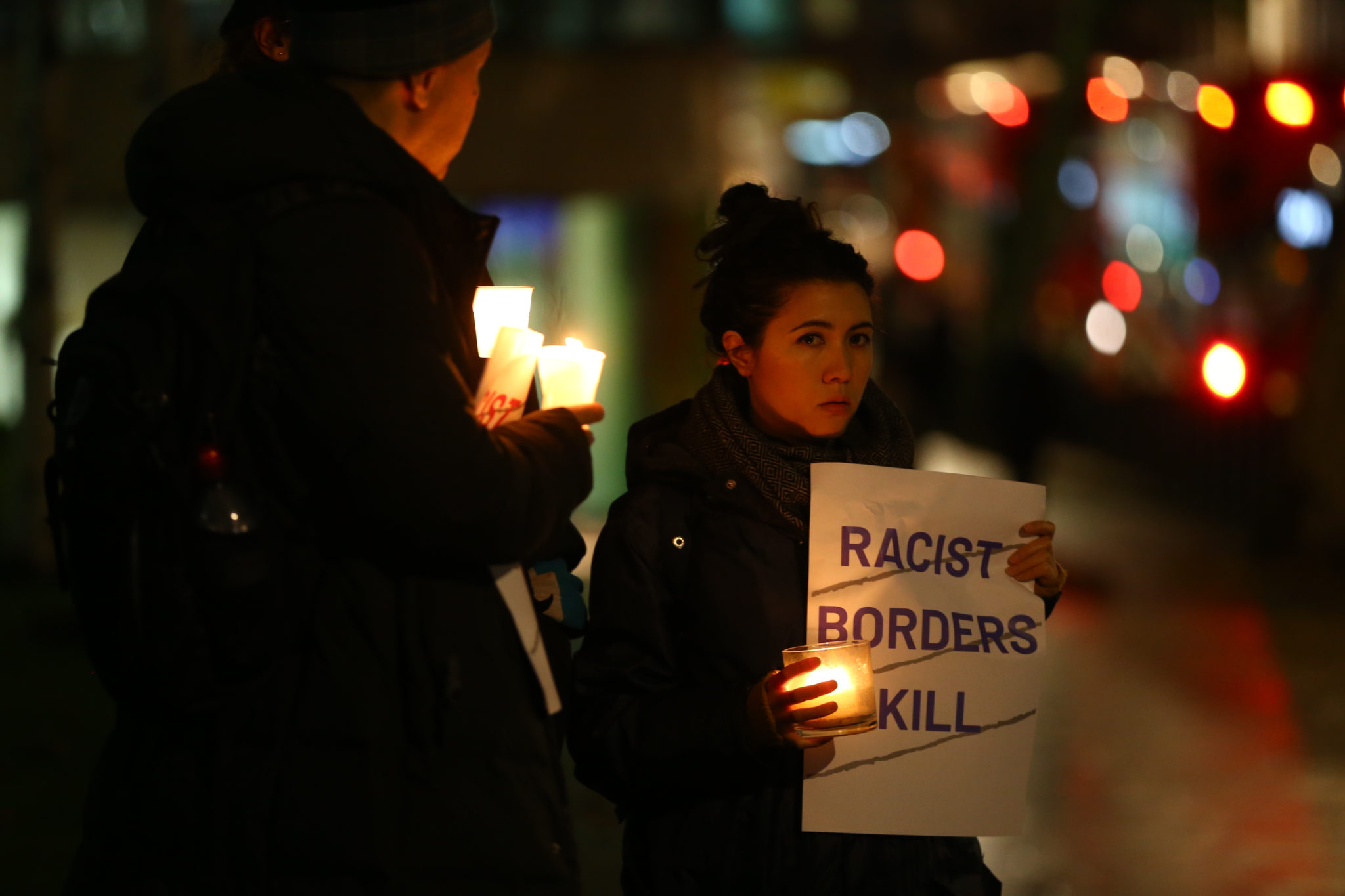 Campaigner hold a vigil for the 39 people found dead inside a lorry in Essex, outside the Home Office in Westminster, London, 24-10-2019. Image: Hollie Adams/PA Wire/PA Images

Vigils have been held outside the Home Office in London, as well as in Brighton and Belfast, to pay tribute to the victims.

Main image shows campaigners holding a vigil for the 39 people found dead inside a lorry in Essex, outside the Home Office in Westminster, London, 24-10-2019. Image: Hollie Adams/PA Wire/PA Images