New data shows over half of households renting in Ireland receive State supports for their costs.

This amounts to 16% of overall households, and 54% of those renting.

The ESRI says there has also been a shift away from the direct provision of support - through local authority and approved housing body owned accommodation - towards indirect subsidisation of housing costs in the private rental sector.

There are also questions about how well-targeted these housing supports are.

It says: "Many low-income renters receive no support for their housing costs and face high rent-to-income ratios, while almost one-in-five (16.7%) of supported renters are in the top half of the income distribution."

And it says the qualification criteria for housing supports have become "more restrictive" in recent years.

"We estimate that the share of households eligible to apply to their local authority for support with housing costs fell from 46.8% to 33.9% between 2011 and 2019, largely because of a freeze to most income limits."

It also notes that the rent limits for HAP cover a "very small share" of properties, particularly in cities for single adults.

It cites an example that, across Dublin, only 6% of one-bedroom tenancies registered in 2020 came under the maximum rent allowed for single adults claiming HAP.

And only seven out of 31 local authorities had at least a quarter of one-bedroom tenancies below these limits. 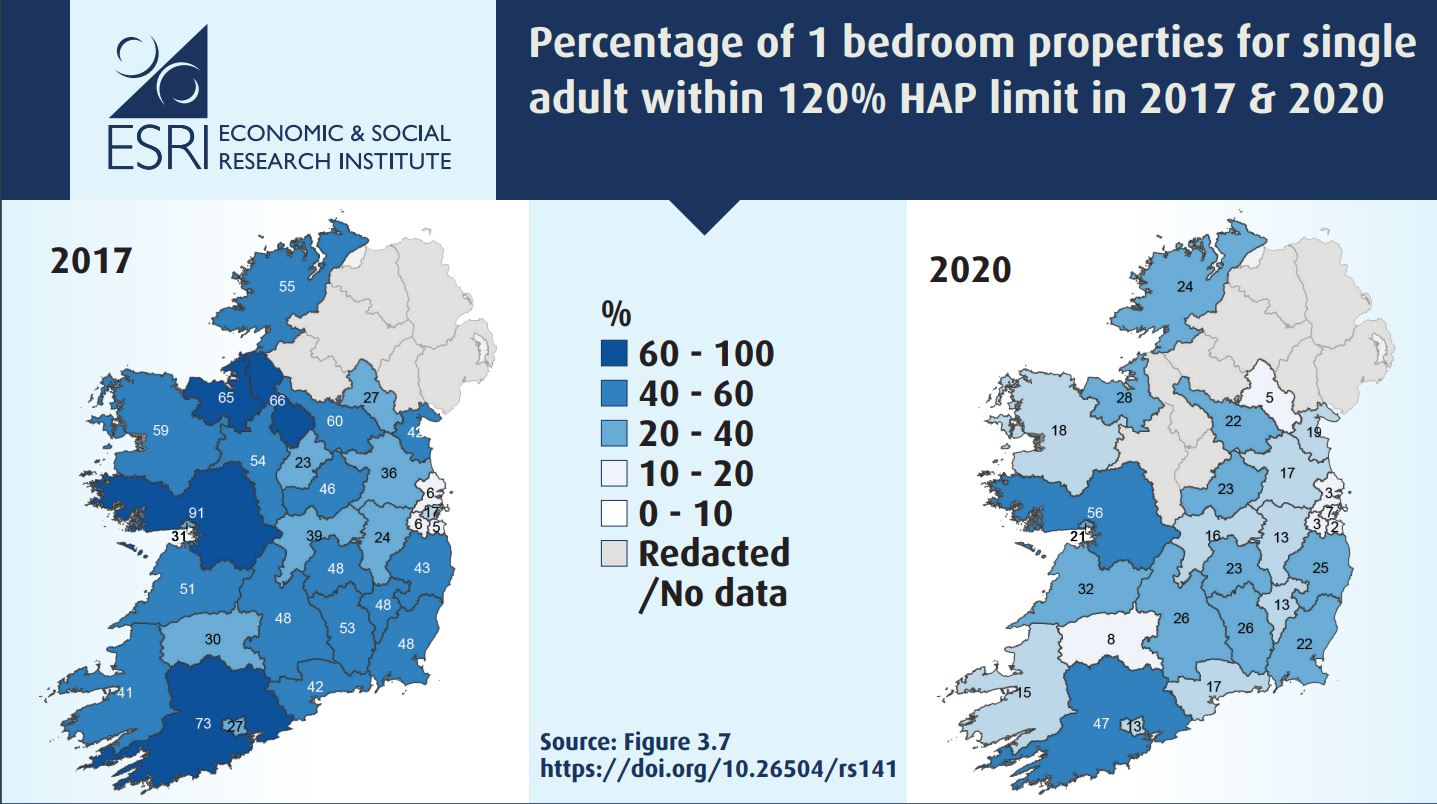 "This is in part because rents for new tenancies increased by 24% between 2017 - when these rent limits were last revised - and 2020, but it also reflects differences in coverage across counties when introduced", the ESRI suggests.

Barra Roantree, one of the report authors, says: "The size of the supported rental sector has grown significantly in recent decades, with more of this support now provided indirectly through schemes like HAP.

"While both direct and indirect supports greatly improve affordability for households, our finding that almost one-in-five supported renters are in the top half of the income distribution raises questions about how well targeted these supports are."

Fellow author Rachel Slaymaker says it shows a 'chronic undersupply' for the market.

“Our report highlights the chronic undersupply of affordable rental accommodation in many areas, particularly for low-income single adults.

"Addressing this is likely to require sustained investment in and expansion of the public housing stock for rent: something that will entail more than just increasing expenditure."

New figures, from the Department of Housing, show over €626m was paid to landlords under these schemes last year - an increase of 8% on 2020.

Other counties with high figures include Cork, Louth, Kildare, Meath and Wicklow.