Some 6,577 abortions were carried out in Ireland last year, according to new figures from the Dep...

Some 6,577 abortions were carried out in Ireland last year, according to new figures from the Department of Health.

This is 89 fewer than 2019 - the first year women could legally access the service in the Republic.

Around 36% of women said they were living in Dublin at the time of their procedure, with almost 10% residing in Cork.

There were also 36 terminations in Northern Ireland in the same period, while no county was given in the case of 425 procedures. 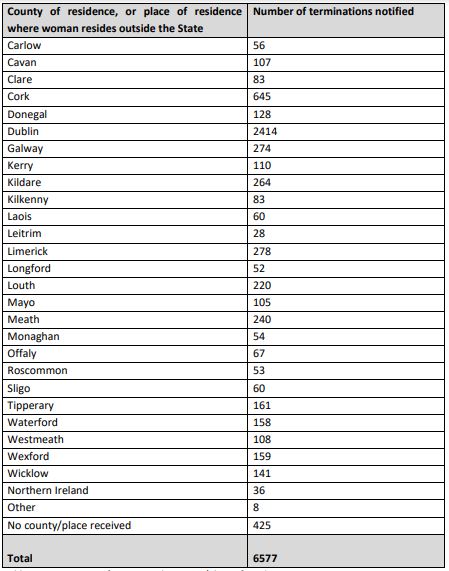 The Department of Health was notified of 709 terminations in January - the most of any month in 2020.

December was the month with the least amount of terminations, at 327.

"Despite the pandemic, 6,577 people had an abortion in Ireland during 2020, a similar number to the prior year, showing that abortion is very much an essential service.

"It also indicates the success of providing abortion as a telemedicine service during the past year, which clearly should be retained going forward.

"What is not captured in this report is how many people were refused abortion in Ireland, how many had to travel long distances within Ireland or beyond, and how much distress was caused by the unnecessary barriers within the current abortion law.

"Despite the legalisation of abortion, we know that many people continue to face stigma and shame when accessing abortion care in Ireland."

"Only 25 people accessed abortion on the ground of a medical emergency, or risk to their life or health.

"This is very similar to the numbers who accessed abortion on these grounds in 2019 and indeed under the highly restrictive Protection of Life During Pregnancy Act.

"The fact that similar numbers of people access abortion post-12 weeks before and after the Repeal of the 8th Amendment is highly concerning.

"We are aware that many continue to be forced to travel to the UK or elsewhere if they miss the highly restrictive 12 week cut-off."

Also commenting on figures, Eilís Mulroy of the Pro Life Campaign says: "Today's abortion figures are devastating and are the opposite of what members of the Government repeatedly promised when they said abortions would be 'rare' if people voted for repeal.

"Voters were misled every step of the way by these same politicians."

Main image: A woman walks past a mural in Dublin city centre ahead of the 2018 referendum on the Eighth Amendment of the Constitution. Picture by: Leah Farrell/RollingNews.ie