Stones, bottles and petrol bombs were thrown at police officers on another night of unrest in Nor...

Stones, bottles and petrol bombs were thrown at police officers on another night of unrest in Northern Ireland.

A car was also seen burning in Belfast amid a heavy police presence.

Police have been dealing with unrest all week in the North, prompting leaders from across the political spectrum to urge peace.

Leaders in Ireland and the UK have called for calm, amid fears the protests could escalate further over the weekend.

Two men have been charged following the scenes on Thursday in west Belfast, with the police saying a 24-year-old and a 32-year-old were charged with riot.

The 32-year-old was also charged with possession of a petrol bomb in suspicious circumstances.

Both the loyalist area of Tiger Bay and the nationalist New Lodge region of Belfast saw violence last night.

The unrest took place despite calls from loyalists for calm out of respect for the passing of the Duke of Edinburgh. 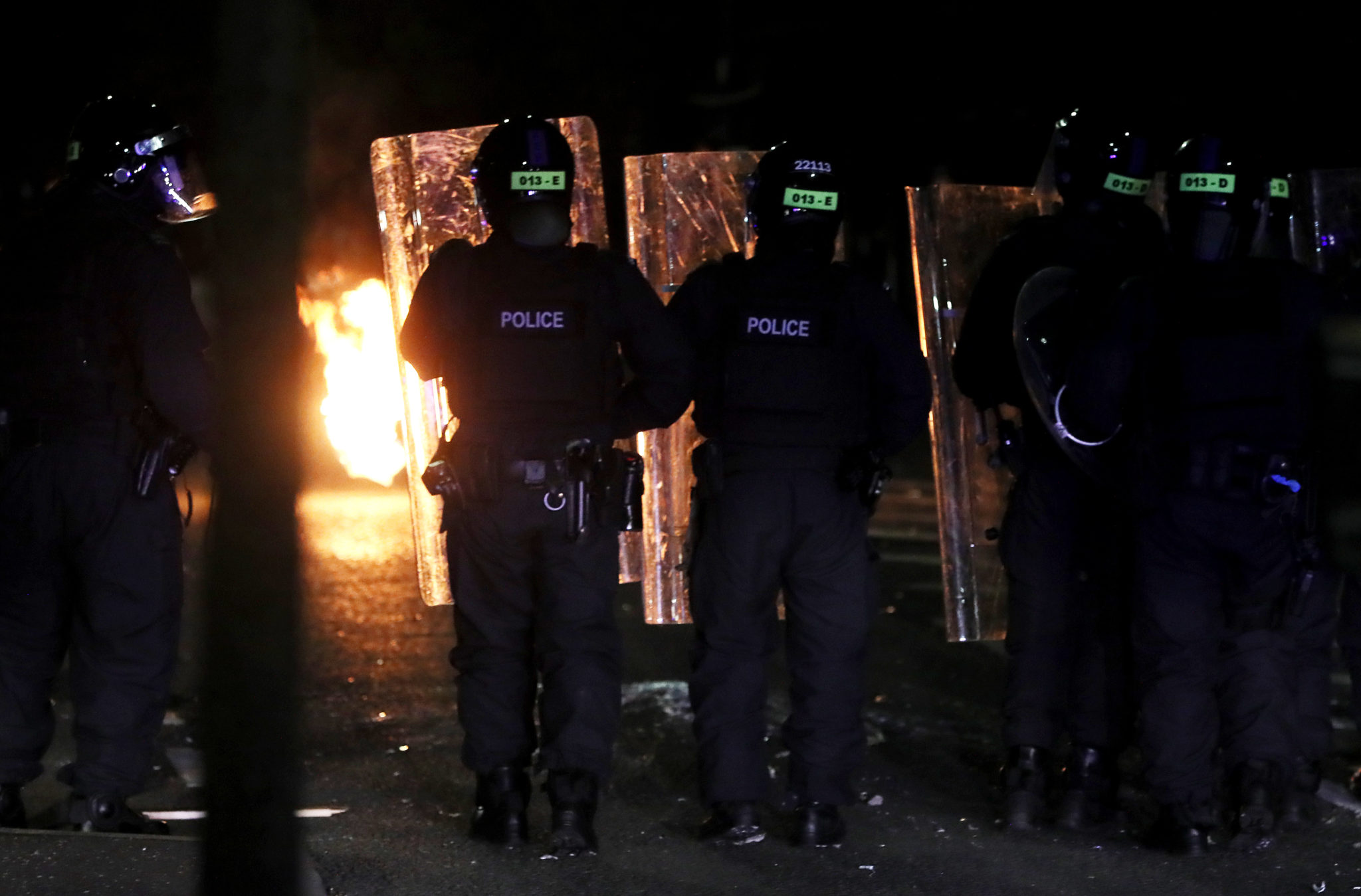 PSNI officers look on after a rioter threw a petrol bomb in the Tigers Bay area of North Belfast last night. Credit: PA

"It's sort of changed the mood from what has happened from obviously being very orchestrated and very controlled violence that had been happening in loyalist areas to what we would call recreational rioting," she said.

"Basically young people who are moving from area to area and they're coming from all over to cause trouble.

Allison added that some of the disorder is being organised through social media, with fake accounts understood to be orchestrated by a number of people coordinating the riots.

"People have the right to peacefully protest and that is part of our democracy, but if you put those protests at an interface, there's obviously a higher degree of chance there will be trouble," she said.

"We've had politicians calling for those social media companies to act more responsibly and remove these accounts, some of which have only sprung up in the past five or six days which are constantly advertising these protests and calling people out.

"Because the main loyalist leaders and members of all political parties had urged people to step back from what was happening.

"There were supposed to be unnotified band parades taking place across Northern Ireland last night in various different loyalist places, those were all called off after the Duke of Edinburgh.

"And so what we did see instead is clashes between very young people, people depressingly young, people as young as 12 or 13." 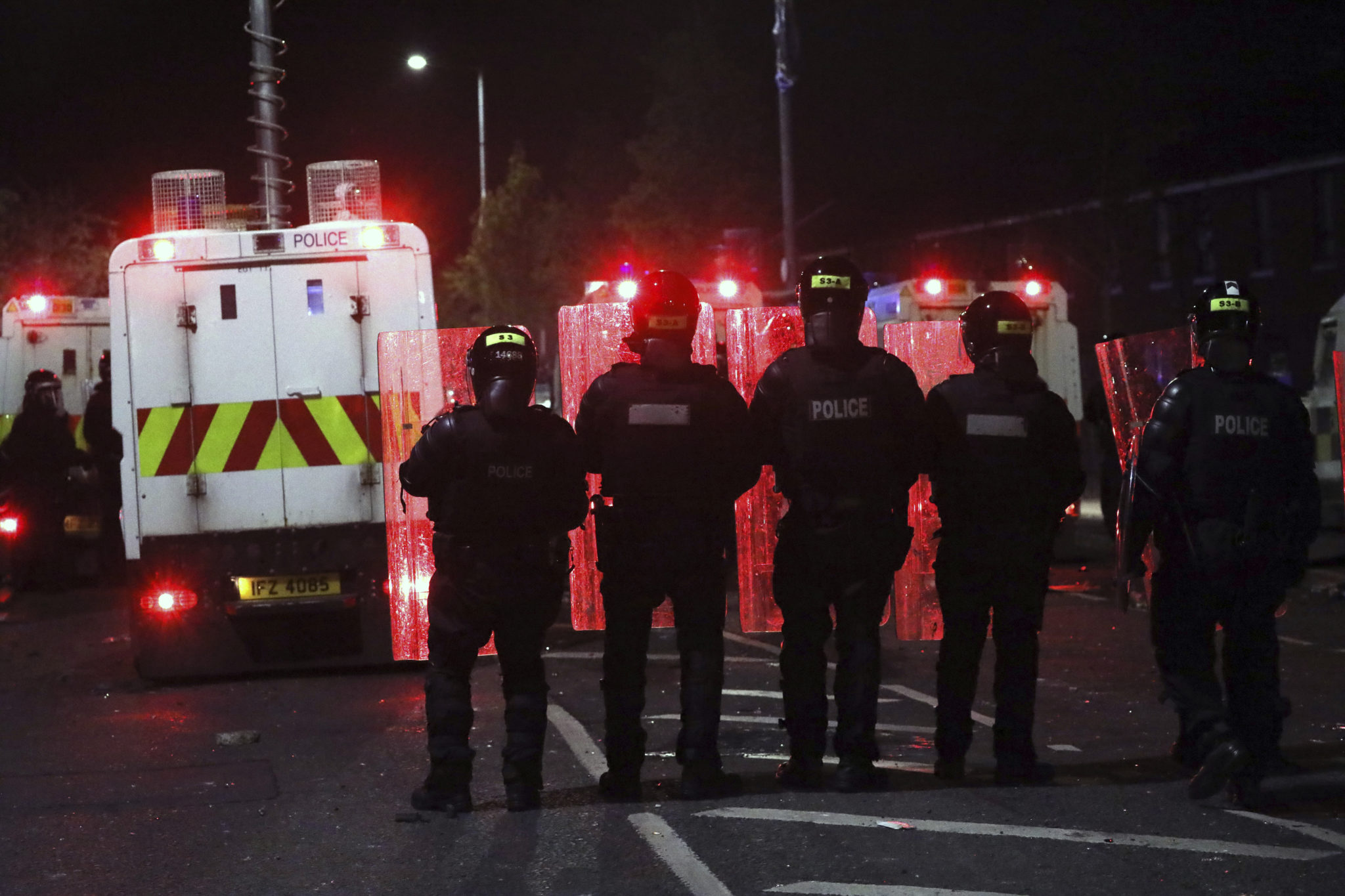 The cause of the unrest has largely been attributed to frustration over a decision not to prosecute members of Sinn Féin over alleged coronavirus regulation breaches at the funeral of republican Bobby Storey.

There are many issues and different agendas at play in the North that have led to the violence, Allison added, with others crediting the unrest to anger over Brexit and the Northern Ireland protocol.

"There clearly is anger in loyalist communities in relation to the protocol, but to suggest that young people are rioting because there are checks at ports on goods coming into Northern Ireland is nonsense," she said.

"To suggest that young people are rioting because of a funeral that took place in a different area last June is nonsense.

"These are people who have been sucked into this and sucked into something that is not an environment of their making and that's what makes me so angry.

Main image: The PSNI use a water cannon on youths on the Springfield road, during further unrest in Belfast on Thursday night. Credit: PA