The mother of a boy with serious special needs is facing homelessness within hours after the coun...

The mother of a boy with serious special needs is facing homelessness within hours after the council refused her medical priority housing.

Mother-of-three Natasha White has been desperately searching for a place to live since she was served notice to leave her home of nearly seven years in February.

Her eldest son André is living with Down syndrome, autism and aggressive juvenile arthritis, while her second eldest Carter has Combined Type ADHD and suffers from severe anxiety.

On The Pat Kenny Show this morning, Natasha said she has “literally exhausted every avenue” trying to find a new home over the last six months.

She now has no idea what she is going to do as her deadline to leave is today.

Natasha said Andre is now nearly 15 and suffers from a range of issues.

“It means he’s in daily pain,” she said. “He suffers an awful lot.”

“He is backwards and forwards to the hospital and they still haven’t found a medication to work for it which means it is getting progressively worse as time goes on. It also affects his mobility.

“He’s also at very high risk for infections and stuff. He has very bad asthma and he suffers from chronic chest infections.

“He also suffers from sleep apnoea which require him to wear a CPAP machine because he has severe obstructive sleep apnoea.” 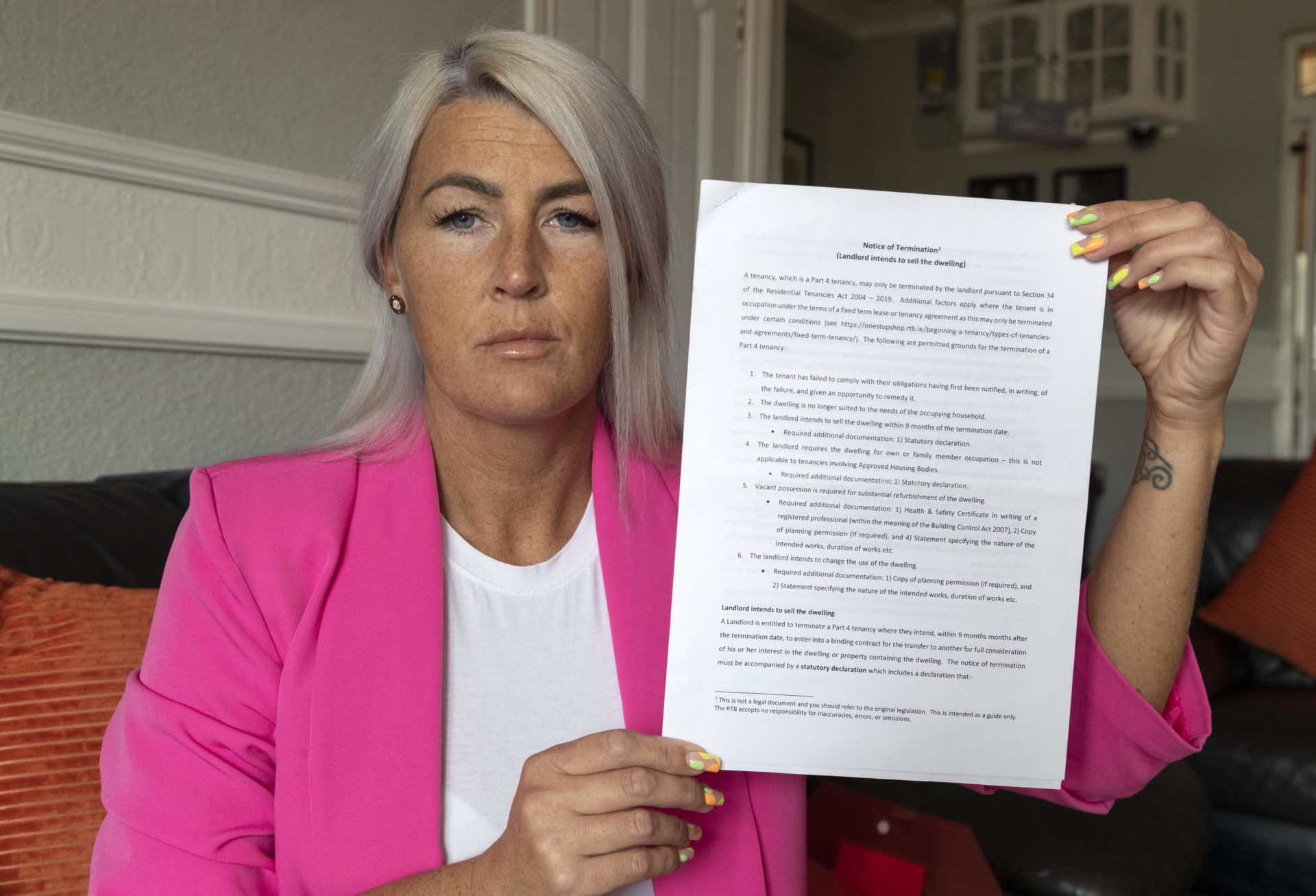 Mother-of-three Natasha White with the Notice of Termination sent to her by her landlord, 27-07-2022. Image: Colin Keegan, Collins Dublin

She said his condition means he needs medication to get to sleep.

“Obviously, because he’s in a lot of pain as well, that requires him to have his own space,” she said.

“He can’t understand or express how he’s feeling all the time because of his Down syndrome and that can cause his behaviour to get bad at times – through no fault of his own.

“He is a brilliant child, but he has a lot going on and it does take an awful lot of time helping him and doing everything that needs to be done. There is a lot involved in it and a lot involved in keeping him happy as well.”

Nine-year-old Carter’s severe anxiety has made the situation even harder to deal with.

“I just keep saying, I’m working on it.”

Despite her children’s situation’s, the local council refused Natasha’s application for medical priority housing – telling her a new home would not improve André’s condition.

“Obviously new housing is not going to make Andre’s Down syndrome go away or make Carter’s ADHD go away,” said Natasha. “But it’s going to give my children the security they need.

“Any child with additional needs and intellectual disabilities needs to have a strict routine and a safe environment to feel safe and to feel happy.”

She said previous house moves have caused Andre to regress significantly – and the uncertainty over their situation is having a serious impact on all the children’s mental health.

"It’s been absolutely horrendous because I can’t tell them where we’re going," she said. "I haven’t found a new house for us to move to and obviously I've been packing up and tensions have been running very high.

"They really don’t want to leave."

Up until recently, Natasha had hoped the council would buy the property so her family could remain.

That plan was scuppered last week when a surveyor found safety issues with an attic conversion in the house.

“If it was the difference between having to move out and staying, I would find a way to manage without the attic,” said Natasha. “I would sleep in the sitting room if needs be myself, so my kids could have their own space.

“As it stands, I have nowhere to go. I don’t have family with space to take us in. I don’t have anybody that can take me and three children in.

“I really don’t what today is going to bring. I’m just hoping and praying that I get a phone call from somebody with some sort of good news.