Cyclone Fani: 'Three dead' and over one million evacuated in India

Three people are reported to have died and more than one million have been relocated after Cyclon...

Cyclone Fani: 'Three dead' and over one million evacuated in India

Three people are reported to have died and more than one million have been relocated after Cyclone Fani made landfall on India's east coast.

The tropical cyclone, a grade five storm, has lashed the state of Odisha with 204kph winds and heavy rain.

It has brought down trees and power lines and "extensively" damaged the Hindu temple town of Puri, which is popular with pilgrims.

Fani made landfall at around 8.00am local time on Friday, the India Meteorological Department (IMD) said.

The sound and the fury : here's what the landfall at Puri by #CycloneFani actually looked like..

An elderly man died of a heart attack in a storm shelter and a teenager was killed by a falling tree, according to reports in India.

A woman is said to have been killed after by flying debris. 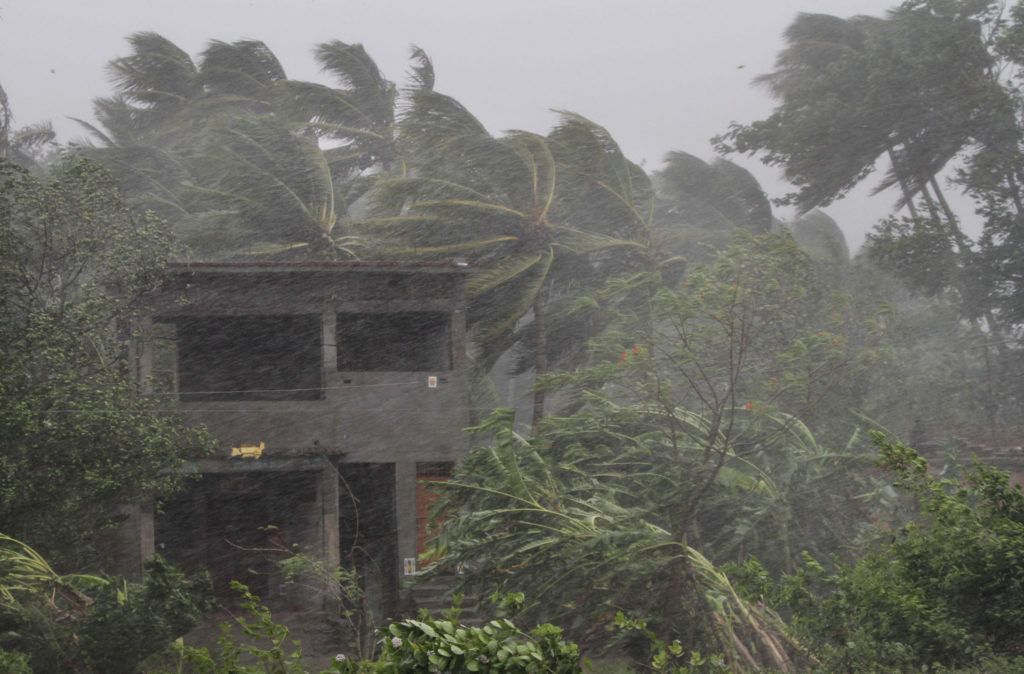 An abandoned house and trees bend with gusty winds ahead off the landfall of cyclone Fani on the outskirts of Puri, Odisha, india, 03-05-2019. Image: AP Photo

A major hospital suffered extensive structural damage but all patients and staff were safe, authorities said.

The country's national disaster response force said around 1.2 million people have been evacuated from low-lying areas of the state and moved to nearly 4,000 shelters.

The airport in the state capital Bhubaneswar is closed. Schools and colleges in Odisha are also shut.

Twitter user Swapnil Tripathi, who is in Bhubaneswar, shared a video which showed lightning breaking out across the sky before the cyclone hit the east coast.

It's already started raining and thundering, here in Bhubaneswar. Watch till the end. #CycloneFani

Another image from the city appeared to suggest the force of the storm shattered a glass window.

Indian politician Chowkidar Sambit Patra posted a video of the storm and wrote: "The process of landfall of #CycloneFani has begun... extremely high wind speed... heavy rain... the harrowing sound... reminds me of 1999 Supercyclone.

"With folded hands I pray to Lord Almighty Jaganath to give us the strength to endure this."

The cyclone, the strongest to hit India in five years, spent days building power in the northern reaches of the Bay of Bengal before it made landfall.

Irish citizens in the area are advised to monitor media reports and follow the advice of local authorities and tour operators.