German Chancellor Angela Merkel has said her country will do 'everything' it can to prevent a no-...

German Chancellor Angela Merkel has said her country will do 'everything' it can to prevent a no-deal Brexit.

She was speaking at Farmleigh in Dublin, after she met with the Taoiseach Leo Varadkar on Thursday.

It was Chancellor Merkel's first visit to Dublin since 2014, and preparations for a no-deal Brexit were high on the agenda.

Their meeting came a week before an emergency summit of European leaders, where they will consider the latest development from Westminster.

British Prime Minister Theresa May is holding talks with opposition leader Jeremy Corbyn, to try and find a compromise that could secure a majority in the House of Commons.

Speaking after the meeting on Wednesday, the Taoiseach said there was a need to be "patient and understanding of the predicament" facing MPs in Westminster amid the ongoing Brexit impasse.

He acknowledged the votes in the House of Commons opposing no deal were welcome, but noted that MPs have failed to back any alternative plans.

Mr Varadkar added: "The difficulty we have as heads of Government... is that ultimately governments negotiate with governments.

"We discussed planning at European and domestic level for no-deal - including how we could work together to meet our twin objectives of protecting the Good Friday Agreement... and also protecting the integrity of the European Single Market and the Customs Union.

"I welcome the Chancellor's continuing understanding and support for the challenges that we face - and if it arises, it'll be a shared challenge for Ireland and the European Union."

Chancellor Merkel, meanwhile, said she wanted to demonstrate that the remaining EU countries will continue to stand together.

She observed: "We do hope that the intensive discussions that are ongoing in London will lead to a situation... where Prime Minister Theresa May will have something to table.

"We want to stand together as 27 - until the very last hour.

"I can say this from the German side: we will do everything we can to prevent a no-deal Brexit, but we have to do this together with Britain."

On the issue of the border, Mrs Merkel said: "We will simply have to be able to do this, we have to be successful."

Asked what would happen next week if Britain's withdrawal agreement was not ratified, she said: "I am not in a position to answer speculative questions... We have to wait and see what happens.

"I think we need to respect the debates that are ongoing in Britain right now".

Mr Varadkar added: "In the event of a no-deal, it's not possible quite frankly to have a clear plan - because there are so many different contingencies and hypotheticals.

"And a lot of it will depend on what the UK decides to do".

Ahead of their formal meeting, the two leaders joined roundtable discussions with people from the North and border region who shared their views on the impact any return to a hard border would have on border communities and businesses. 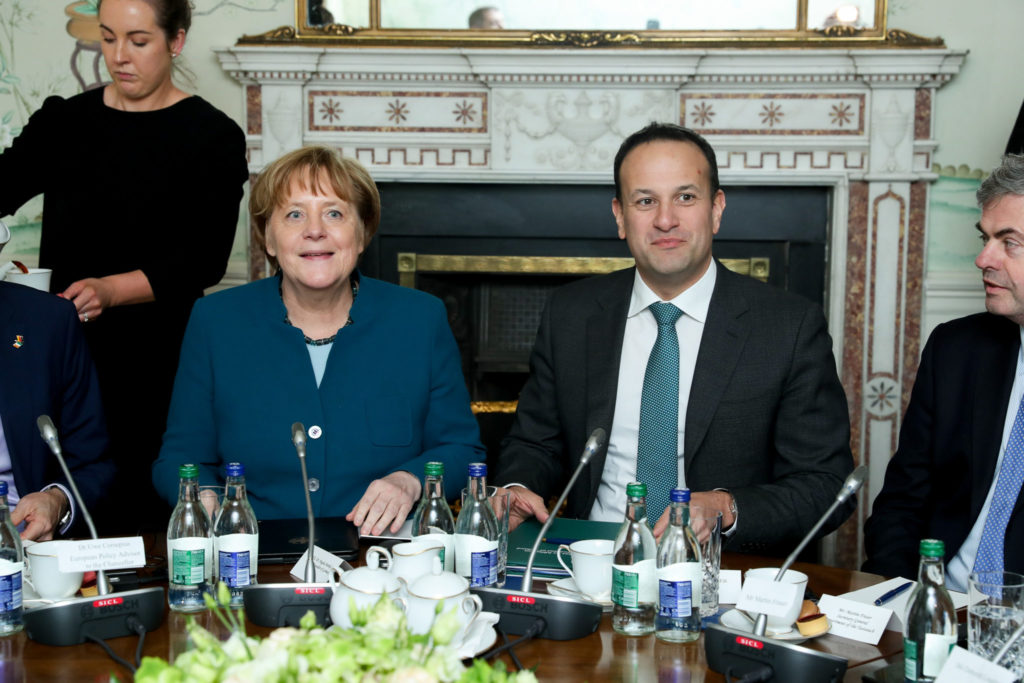 Peter Sheridan from Co-Operation Ireland was part of the Northern Irish delegation who met Chancellor Merkel.

"I think everybody who was there could not help being impressed by how much the Chancellor got it.

"I think her own background, living on one side of a wall... she understood the passion of people, and the very personal stories that people shared with her."

Chancellor Merkel said she "knows only too well" what happens when borders are removed given her own experiences in Germany.

She said she was encouraged by today's meeting to find ways to ensure the peaceful co-existence in Ireland continues after Brexit.

Earlier, the Government said: “These are people for whom the border is a very real issue.

“People from communities along the border, from business and with direct personal experience of conflict before the Good Friday Agreement.

“It is important to hear their voices as we work together to deal with the challenges that Brexit presents.”

It comes as the House of Commons voted by a majority of one to force Mrs May to table a bill calling for a further delay to the Brexit process.

The bill still needs to clear the House of Lords – and the EU will have to agree to any extension.

Mrs May has been in talks in a bid to find a compromise Brexit plan that can command parliamentary support.

Following the conclusion of the latest round of discussions on Thursday, a Downing Street spokesman said: "Today both sets of negotiating teams met for four-and-a-half hours of detailed and productive technical talks in the Cabinet Office, supported by the civil service.

"The government and the opposition hope to meet again tomorrow for further work to find a way forward to deliver on the referendum, mindful of the need to make progress ahead of the forthcoming European Council."

The talks will continue on Friday - with Mr Corbyn describing Wednesday's meeting as “useful but inconclusive.”