The parliamentary parties of Fianna Fáil and The Green Party have approved the Programme for Gov...

The parliamentary parties of Fianna Fáil and The Green Party have approved the Programme for Government.

Three of The Green Party TDs abstained in the vote, but nine voted for it.

While the mood in both Fine Gael and Fianna Fáil is largely in favour of the deal.

Fianna Fáil leader Micheál Martin said the vast majority of his parliamentary party is in favour of the agreement.

"A number of voices had reservations, but the overwhelming majority endorsed the programme.

"Some had queries and clarifications around certain areas, and some had reservations about - not specifically the programme, because many people feel the programme is a good programme - but obviously in terms of political strategy and that some would have concerns.

"But the overwhelmingly majority were in favour".

Under the deal, the two larger parties will get six seats at the Cabinet table - while the Greens will get three.

Mr Martin will be the next Taoiseach, and Leo Varadkar his Tánaiste.

Deputy Martin will hold the role until the end of 2022, and then it would revert back to Mr Varadkar. 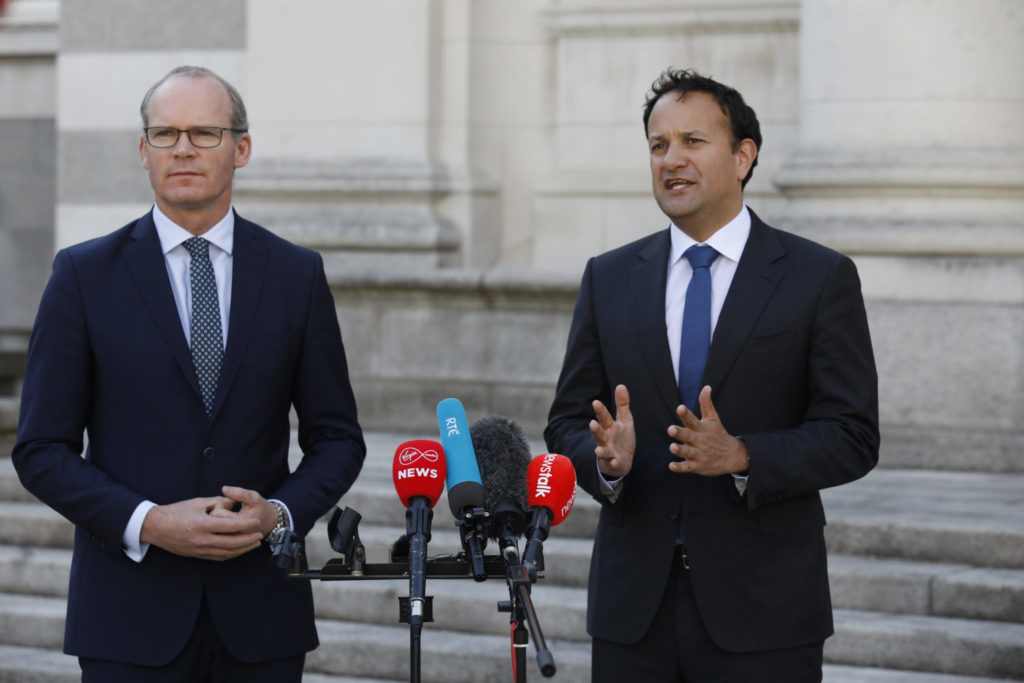 Speaking as the deal was sent to the parties, Mr Varadkar said he believes the three parties can go the distance.

But said he has a tinge of regret about leaving the office of Taoiseach.

"This isn't about me and anybody leaving the Taoiseach's office is obviously going to feel a certain tinge of regret about that.

"But that's not what's important: what's important is that we have a stable government for the country, that we're able to lead the country through the COVID crisis, defeat this crisis, get people back to work, and start fixing some of those long-standing problems in areas like housing and health".

And he said it will be a challenge for the old Civil War parties to get used to governing together.

"I think we can overcome it - this is a historic moment, this represents a government of three parties that won more than 50% of the vote in the last election.

"So we've a very strong democratic legitimacy, and it is the first time that we've had a coalition of this nature - Fine Gael, Fianna Fáil and the Greens.

"But I know that's possible, and definitely what I've seen over the course of these negotiations over the past few weeks is the parties coming closer together, the personalities getting to know each other, understanding each other's positions better, finding common ground.

"And I'm confident this government will work, and it'll last full term".

Leo Varadkar says he’s happy with the programme for government and that for Fine Gael it’s a second chance “to put right some of the things that need to be put right” pic.twitter.com/r6nY6DJqUl

Everything you need to know about the new government deal

The deal includes a 7% annual reduction in greenhouse gas emissions and increased investment in cycling, walking and public transport.

Carbon taxes will also increase to €100 per tonne over the next 10 years.

The document also includes proposals to deliver 50,000 social homes over the next five years and to and ramp up the production of affordable homes on State land.

Leo Varadkar will be Tánaiste & have an office in government buildings, as will the Green Leader

Green Party leader Eamon Ryan said earlier the deal would be good for all sectors of Irish society.

“There are a lot of things in it that, I think, if we delivered them it would be a huge achievement,” he said.

“But actually, it is the delivering them. I think people get over the top in terms of, ‘we got this line in the programme’ but you actually have to deliver it.

All the parties will have their votes on the programme come back on June 26th.