There is a suggestion that the official title of Dublin's Lord Mayor could be changed to remove g...

There is a suggestion that the official title of Dublin's Lord Mayor could be changed to remove gender.

As it stands, the office holder is known as 'Lord Mayor' - while their partner is 'Lady Mayoress'.

You are correct Ciarán. The partner of @LordMayorDublin gets the title of Lady Mayoress 😁

She told The Hard Shoulder: "His official title is Lady Mayoress, apparently, I am Lord Mayor".

Ms Chu was elected on Monday with the support of over two-thirds of councilors, and is the ninth woman to hold the post.

On being elected by Dublin City Council, she said: "My Dad texted me and as expected he asked me 'how was being elected as president?'

"So I had guessed that he would say Taoiseach - I had to unfortunately disappoint him.

"He's very proud, he's over in Hong Kong, he lives over there.

"My mum was with us, she lives over here, and she was delighted.

"It was great to see her face to be honest.

"She's a hard working women and I think she never dreamed that her daughter would become Lord Mayor of Dublin".

She says she is hoping to move into the Mansion House, the official residence of the capital's mayor, with her fiancée Patrick Costello and daughter Alex.

"We're hoping to - we haven't quite discussed it yet because you don't really want to jinx yourself, and as much as I was hoping this would happen I never really thought for certain it will happen so we need to have a proper chat about it."

But she added: "It's definitely bigger than my current house, I tell you that". 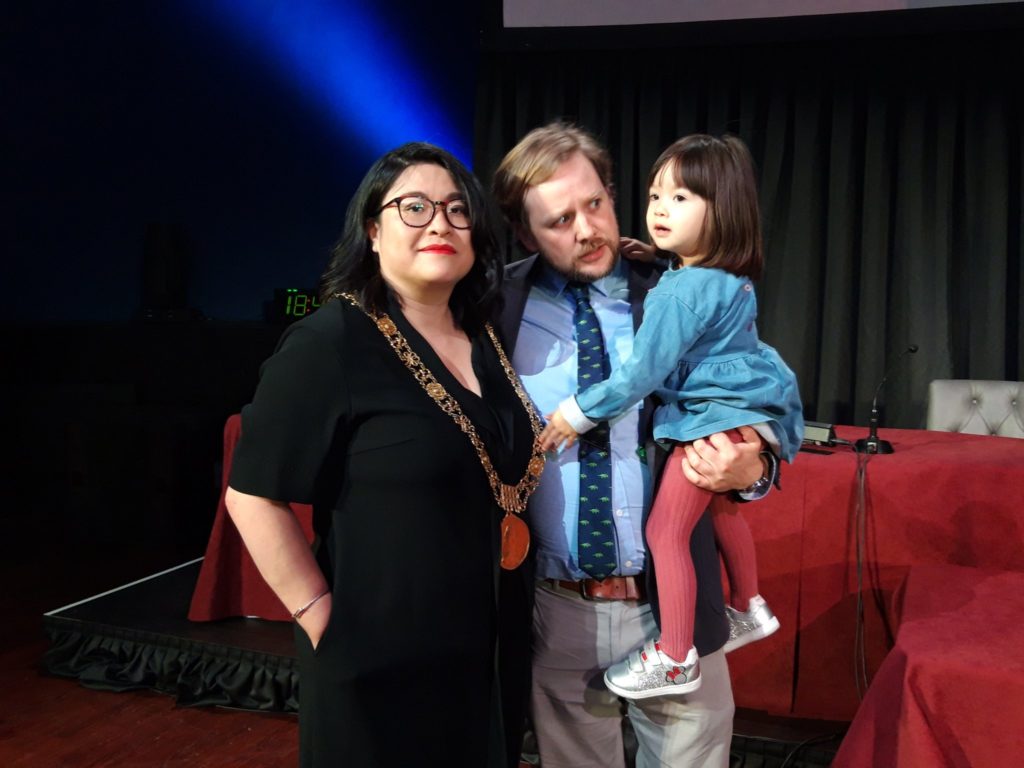 Dublin Lord Mayor Hazel Chu (left) is seen with her partner Patrick and daughter Alex. Picture via @LordMayorDublin on Twitter

Ms Chu also said housing will be her "first and foremost" priority.

"I know previous Lord Mayors have championed it, but we need to continue tackling it.

"It's still a crisis in our city at the moment, and with COVID restrictions easing I think we need to definitely do more about it".

She said she will work with officials, and write directly to and meet with the new housing minister.

Mobility, anti-racism campaigns and tackling gender discrimination are also on her agenda.