Bercow says atmosphere in House of Commons yesterday was "toxic"

MPs returned to Westminster yesterday after the prorogation of parliament was ruled unlawful.

There were furious scenes on both sides of the chamber as the opposing parties took each other to task over Brexit and the controversial suspension of parliament.

He told MPs: "I think there is a widespread sense across the House, and beyond, that yesterday the House did itself no credit.

"There was an atmosphere in the chamber worse than any I’ve known in my 22 years in the House.

"On both sides passions were inflamed, angry words were uttered. The culture was toxic."

He said all he could do was to ask MPs to do was "to lower the decibel level and try to treat each other as opponents, not as enemies".

Boris Johnson was defiant as he returned to Westminster a day after the Supreme Court ruled his prorogation of parliament was unlawful.

He told MPs he felt the court decision was wrong, and criticised the opposition over their approach to Brexit and the next general election. 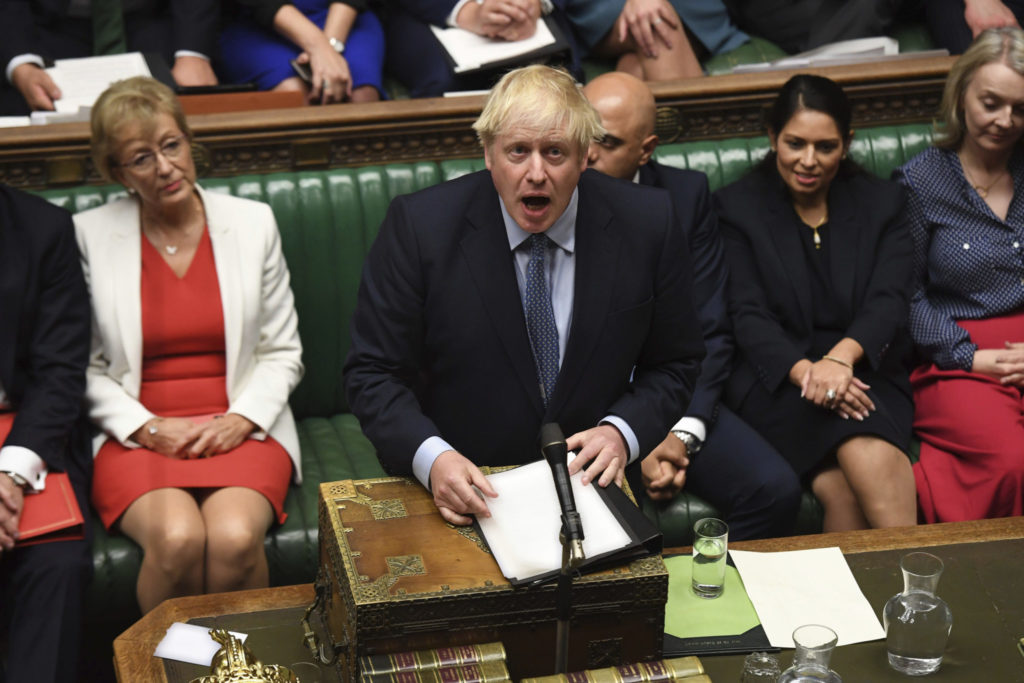 In this handout photo provided by the House of Commons, Britain's General Attorney Geoffrey Cox speaks in Parliament in London, Wednesday, Sept. 25, 2019. An unrepentant Prime Minister Boris Johnson brushed off cries of “Resign!” and dared the political opposition to try to topple him Wednesday at a raucous session of Parliament, a day after Britain’s highest court ruled he acted illegally in suspending the body ahead of the Brexit deadline. (Jessica Taylor/House of Commons via AP)

The prime minister himself faced a barrage of criticism from opposition parties, as well as calls to resign over the court's historic ruling.

During frequently loud and angry scenes in the chamber last night, there were a number of references to murdered MP Jo Cox.

The Labour MP and Remain supporter was killed a week before the Brexit referendum in 2016 by far-right extremist Thomas Mair.

In the House of Commons last night, opposition MPs urged the British prime minister to stop using terms like "surrender act" when talking about a law designed to block a no-deal Brexit.

Labour's Alison McGovern said Mr Johnson's language was "violent", suggesting: "Those of us who constantly remember our friend Jo Cox need our political culture to change now. It is getting toxic."

Her colleague Tracy Brabin, meanwhile, called on the prime minister to "moderate his language so that we all feel secure when we are going about our jobs".

Mr Johnson responded by stating: "What I will say is that the best way to honour the memory of Jo Cox, and indeed to bring this country together, would be, I think, to get Brexit done."

Labour's Paula Sherriff also referenced Jo Cox during her plea for all MPs to "moderate our language" - suggesting Mr Johnson should be "absolutely ashamed of himself".

Mr Johnson responded by claiming he had "never heard such humbug in all my life".

Defending his approach, he argued: "The best way to ensure that every parliamentarian is properly safe and to dial down the current anxiety in this country is to get Brexit done."

Following the exchanges, Jo Cox's husband Brendan said he was a "bit sick at Jo’s name being used in this way".

Feel a bit sick at Jo’s name being used in this way. The best way to honour Jo is for all of us (no matter our views) to stand up for what we believe in, passionately and with determination. But never to demonise the other side and always hold onto what we have in common.

He added: "Just to reiterate this is about the role we all play. Just as ‘surrender’ & ‘betrayal’ is inflammatory language, so is ‘coup’ and ‘fascist’. Let’s all play our part in dialing it down."

She argued: "He has demeaned the office of Prime Minister and he should apologise for them immediately."

Speaking in the Commons, Ms Swinson also said she had reported to the police a threat against her child.

She suggested: "That was dismissed as humbug. This is a disgraceful state of affairs, and we must be able to find a way to conduct ourselves better."

As of tonight, there’s a gaping moral vacuum where the office of Prime Minister used to be. I didn’t know Jo Cox but I’m certain this man is not fit to speak her name. https://t.co/fg4FlbhP5x

I know the PM is aware of & sympathetic about the threats far too many of us have received because I shared with him recently the threats I am getting. But at a time of strong feelings we all need to remind ourselves of the effect of everything we say on those watching us.