Actor Will Smith won a Best Actor Oscar on Sunday, just minutes after rushing onto the stage and hitting comedian Chris Rock in the face.

Smith, who won the best actor gong for his role in biopic King Richard, was reacting to a joke Rock had aimed towards Smith's wife, Jada Pinkett Smith.

Smith then walked up onto the stage, hitting out at Rock before returning to his seat and shouting: "Keep my wife's name out your f****** mouth."

Will Smith punches and verbally abuses #Oscars host Chris Rock after he made a joke about his wife. Smith went on to win 'Best Actor' pic.twitter.com/dSh2GlzNSN

Rock appeared shocked and flustered as he tried to resume presenting the best documentary feature category. He said: "That was the greatest night in the history of television."

Introducing the next set of presenters, Sean Coombs joked about the testy moment, saying: "Will and Chris, we're going to solve that like family at the gold party."

In a brief statement early on Monday, the Academy of Motion Picture Arts and Sciences said it "does not condone violence of any form".

When Smith was announced as Best Actor, he received a standing ovation from the crowd.

Accepting his award, Smith said: "Ah man. Richard Williams was a fierce defender of his family. In this time in my life, in this moment, I am overwhelmed by what God is calling on me to do and to be in this world."

He went on to talk about "protecting" the young actresses in the film - Aunjanue Ellis, Saniyya Sidney and Demi Singleton.

He said: "I'm being called on to love and protect people, and to be a river to my people. I know to do what we do, you got to be able to take abuse… You got to smile and be like 'That's OK'.

"Denzel [Washington], he just said to me, at your highest moment, that's when the devil comes for you.

"I want to be a vessel for love. I want to say thank you to Venus and Serena for entrusting me with your story. I want to be an ambassador for that kind of love and concern.

"I want to apologise to the Academy and to all my fellow nominees, this is beautiful moment, and I'm not crying for winning an award, it's about being able to shine a light on all of the people."

He went on to list the cast and crew of King Richard and the entire Williams family, before adding: "Art imitates life - I look like the crazy father. Love will make you do crazy things."

He finished off thanking his family and wife, but notably there was no apology for Chris Rock.

While many weren't sure if the moment was staged or real, it's possible that Rock's reference to Pinkett Smith's hair touched a nerve with Smith - as she has recently spoken publicly about a struggle with alopecia following her diagnosis in 2018. 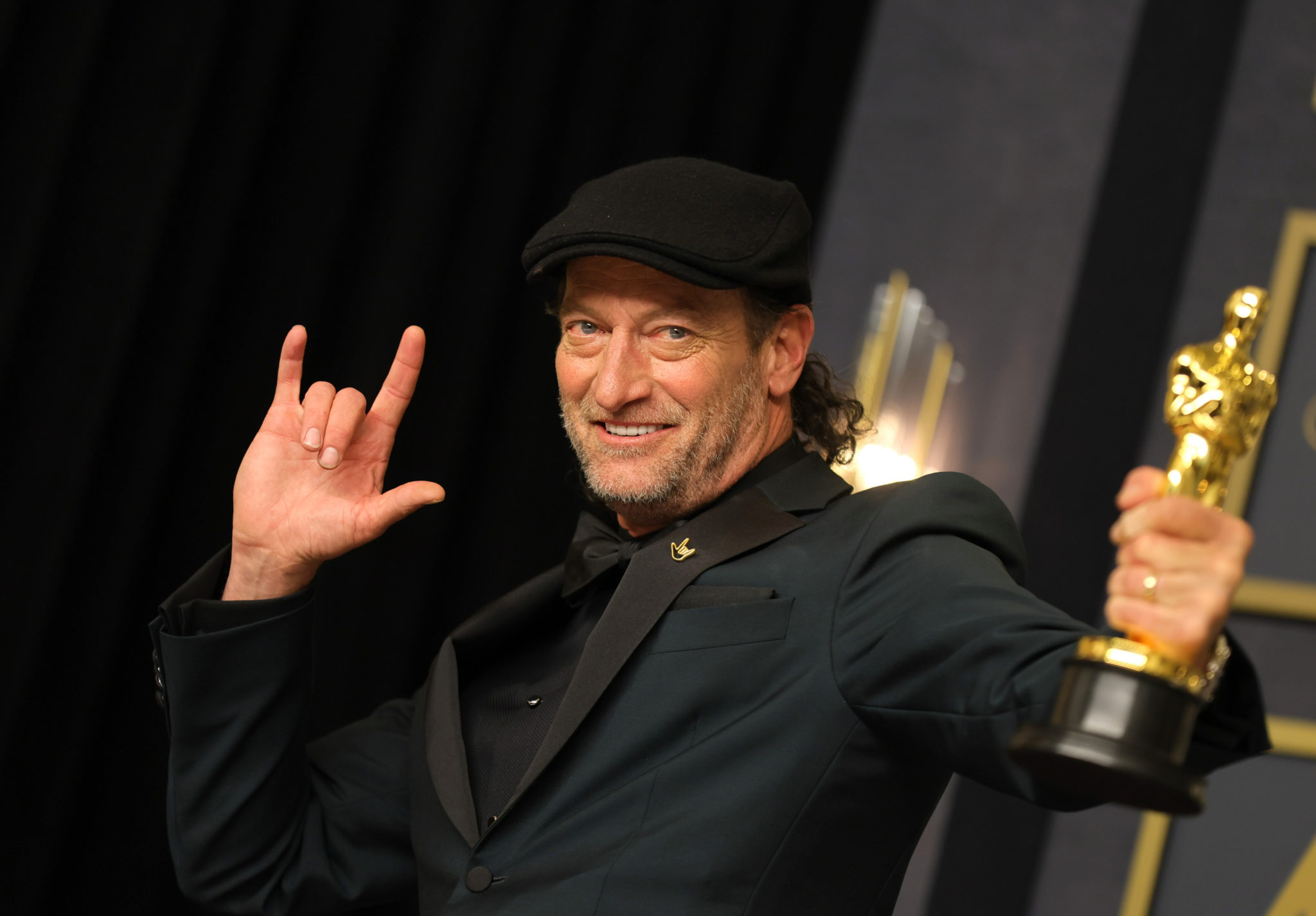 Troy Kotsur poses with his Academy Award for Best Supporting Actor. Picture via @TheAcademy on Twitter

CODA - a film about the child of deaf adults - took the top prize of Best Picture.

With a cast led by deaf actors, it reinforces the importance of authentic casting.

The film - which raised a record price when it was bought by Apple TV + at Sundance Film Festival - has become the first movie from a streaming platform to win the top prize.

He gave a moving tribute to his father and the deaf community, saying: "My dad he was the best signer in our family, but he was in a car accident and he became paralysed from the neck down and he was no longer able to sign.

"Dad, I learnt so much from you I'll always love you, you are my hero. Thank you to my biggest fans.

Jane Campion won Best Director for gothic western The Power Of The Dog, becoming only the third woman to win the award in the show's 94-year history.

However the semi-autobiographical 'Belfast' failed to win big, despite seven nominations.

Kenneth Branagh took Best Original Screenplay for the retelling of his childhood in Northern Ireland at the start of The Troubles.

"Will Smith just bounded up on stage, smacked Chris Rock in the face and then sat down again.

"He shouted that out twice - and it was unexpected, some people thought it was a comedy bit.

"You don't expect to see somebody smack somebody else at the Oscars.

"It was like a Jerry Springer moment rather than the Oscars.

"And then 15 minutes later Will Smith won as Best Actor - and weirdly got a standing ovation.

"And then he spoke about that God had chosen him to be a vessel of love - and that that was his role.

"To spread love and defend people".

On the ceremony itself, Gray says: "It was like three hours and 20 minutes of boredom and 15 minutes of fireworks".

Main image: Will Smith and Jada Pinkett Smith arriving for the 2022 Academy Awards ceremony. Picture via @TheAcademy on Twitter

'A whimper, rather than a bang' - How the Oscars missed its mark