ISPCA appeal to help reunite Goldfinch bird with its owner

An appeal has been launched by the ISPCA to help reunite a Goldfinch bird with its owner. The bir...

ISPCA appeal to help reunite Goldfinch bird with its owner

An appeal has been launched by the ISPCA to help reunite a Goldfinch bird with its owner.

The bird, named Jonesy, is currently in care after it was discovered by a member of the public who spotted a ring on its leg.

After it was in their garden in Co Cork for a few days, they managed to secure it and called the ISPCA for help.

Despite local enquiries in the Monkstown area, no owner has been located so far.

The ISPCA is appealing to the public for help in locating his owner.

As Jonesy was ringed, it is an indication that he was bred in captivity - so he would not thrive or survive in the wild.

ISPCA senior inspector Lisa O’Donovan said: "It’s so sad to see such a beautiful bird like Jonesy being kept in captivity.

"They are popular because of their striking sound and colouring.

"However, Jonesy and other similar birds kept in captivity, simply won’t survive in the wild if they escape or are released.

"Jonesy is content in his new environment but we do hope to reunite him with his owner, or, alternatively, find him a responsible new home, with an experienced owner". 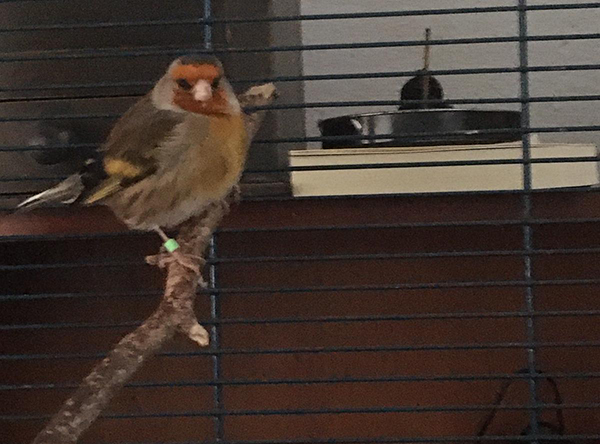 Jonesy the Goldfinch is in the care of the ISPCA. Picture by: ISPCA

She added: “While we believe that Jonesy was captive bred, these sorts of birds are sometimes illegally taken from the wild.

"Members of the public should be aware that trapping these birds in the wild is an offence under the Wildlife Acts."

Anyone with information is asked to contact the ISPCA Helpline on 1890-515-515 or email helpline@ispca.ie.

They can also report online here with any information.