Ireland's most popular beaches getting dirtier

Some of Ireland’s most popular beaches have become dirtier this past year.  Every year Irish B...

Ireland's most popular beaches getting dirtier

Some of Ireland’s most popular beaches have become dirtier this past year.

Every year Irish Business Against Litter conducts a survey of the nation’s beaches and this year’s was a “disappointing result”.

The group inspected 33 areas - which included harbours, rivers and numerous beaches - but only eight were judged to be clean.

“But one particular trend of note was how our most popular beaches have slipped in terms of cleanliness.

“Beaches like Lahinch, Brittas Bay, Curracloe, Portmarnock and Stranhill, these were all clean this time last year, they’re moderately littered this time now.

“I’m not saying they’re heavily littered - but obviously they’re not as clean as they should be and that’s disappointing.”

The end of compulsory mask wearing means that the group found far fewer items of PPE than they had in 2021 but Mr Horgan said there were significant quantities of other items.

“They [coffee cups] were present in half of all the areas we surveyed,” he lamented.

“The most common forms of litter are cigarette butts, sweet wrappers and plastic bottles. 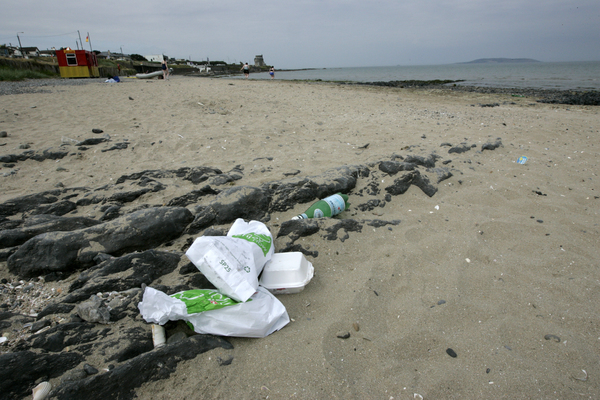 “Millions of tons of plastic are hitting our oceans every year and threatening our very survival as a planet… Even a cigarette butt has the potential to contaminate our environment more than you think.”

Main image: Litter on a beach. Picture by: PA.

Dogs and sport could be banned from Irish beaches