The global ratings agency has increased it to AA-, from A+, with a stable outlook.

This is Ireland's first long-term rating upgrade from S&P since June 2015.

It also returns Ireland to the AA rating category for the first time since entering the Troika programme in late 2010. 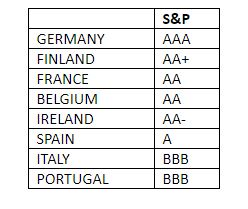 Others in this category also include the United States (AA+) and the United Kingdom (AA).

Internationally, the AA- rating puts Ireland one notch behind the UK rating, and higher than Japan.

Some of the key factors mentioned by S&P for their rating decision are Ireland's strong economic and employment growth, its commitment to fiscal prudence, and continued declines in public and private debt.

Finance Minister Paschal Donohoe says: "This upgrade reflects the next stage in the journey we, in Ireland, have been on for the last decade or so.

"Last year we ran a budgetary surplus for the first time since 2007 and a further improvement is in the pipeline for this year.

"The policies being implemented by the Government are paying dividends and our objective is to create a virtuous circle in which prudent management of the public finances reduces debt service costs."

NTMA chief executive Conor O'Kelly adds: Today's upgrade continues the upward trend in Ireland's sovereign ratings that has been evident for some time.

"Our new AA- rating will increase the pool of potential buyers of Irish Government bonds, which will be positive for demand and further enhance our ability to diversify our investor base."