Ireland has the highest rate of coronavirus infection in the world over the past seven days. Data...

Ireland has the highest rate of coronavirus infection in the world over the past seven days.

Data compiled by Johns Hopkins University in the US shows Ireland has reported an average of 132 cases per 100,000 people every day. 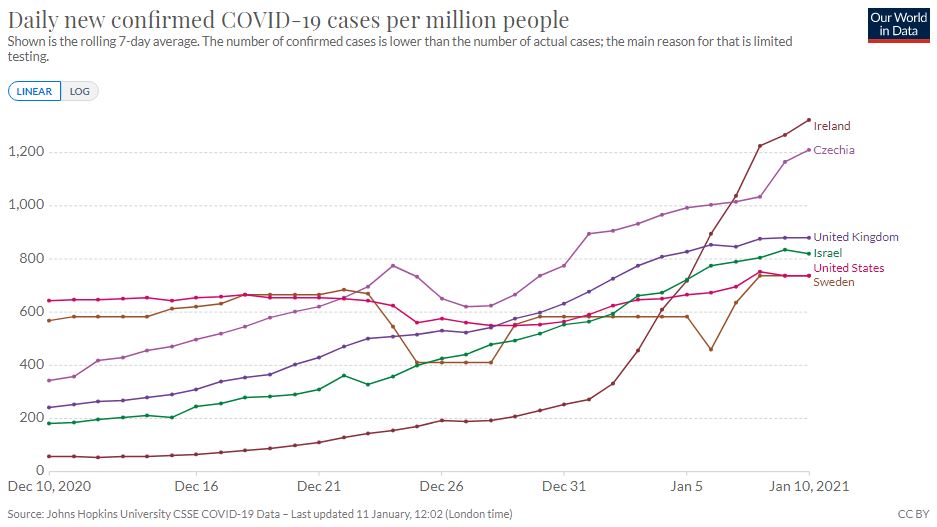 The next highest country is the Czech Republic (Czechia), which is reporting around 121 cases per capita each day.

The top 10 countries also include Sweden, the United States, Israel and the United Kingdom.

Some shoots of green over the weekend hit with more red today in the @hpscireland report.

The data is compiled by the University of Oxford.

It comes as Taoiseach Micheál Martin insisted he is not solely blaming the UK coronavirus variant for the surge in cases - acknowledging that socialisation over Christmas also played a role in transmission rates.

However, he said around 45% of samples of recent cases have shown presence of the new UK variant, suggesting it is still a major factor in the recent transmission rates here.

Mr Martin also said it is 'unfair' to suggest the Government should feel ashamed for their response to the virus before Christmas, and he does not believe mixed messages were sent out to the public.

He stressed the Government is now doing 'everything it possibly can' to get the virus under control again.