Hundreds of thousands of people in Hong Kong have taken to the streets to demonstrate against pro...

Hundreds of thousands of people in Hong Kong have taken to the streets to demonstrate against proposed changes to extradition laws.

The mass demonstrations come ahead of lawmakers voting on whether to pass the controversial amendments.

The proposed changes would allow people to be transferred to jurisdictions that the territory doesn't currently have extradition agreements with.

At the moment, extraditions to countries without agreements with Hong Kong - including mainland China and Taiwan - can only take place on a 'case-by-case' basis.

Officials say no such case-based surrenders have taken place since 1997 - when Hong Kong was returned to China - due to legislative loopholes and practical challenges.

The Hong Kong government has insisted the proposed amendments "mainly target fugitives who have committed serious crimes" and would not affect freedom of speech or freedom of the press.

However, opponents of the proposed bill say it would allow the Chinese government to take people in Hong Kong into custody - meaning they could be sent to mainland China to face trial.

According to Human Rights Watch, the changes would therefore have a "rippling, chilling effect on free speech in Hong Kong".

Sophie Richardson, China director at Human Rights Watch, said: “No one will be safe, including activists, human rights lawyers, journalists, and social workers.

"The extradition law changes would irrevocably damage Hong Kong’s status as the safe harbor for people peacefully promoting human rights in China, and should be scrapped."

Today's protests over the laws have been described by the South China Morning Post as "the most unified protest march in the city in more than a decade". 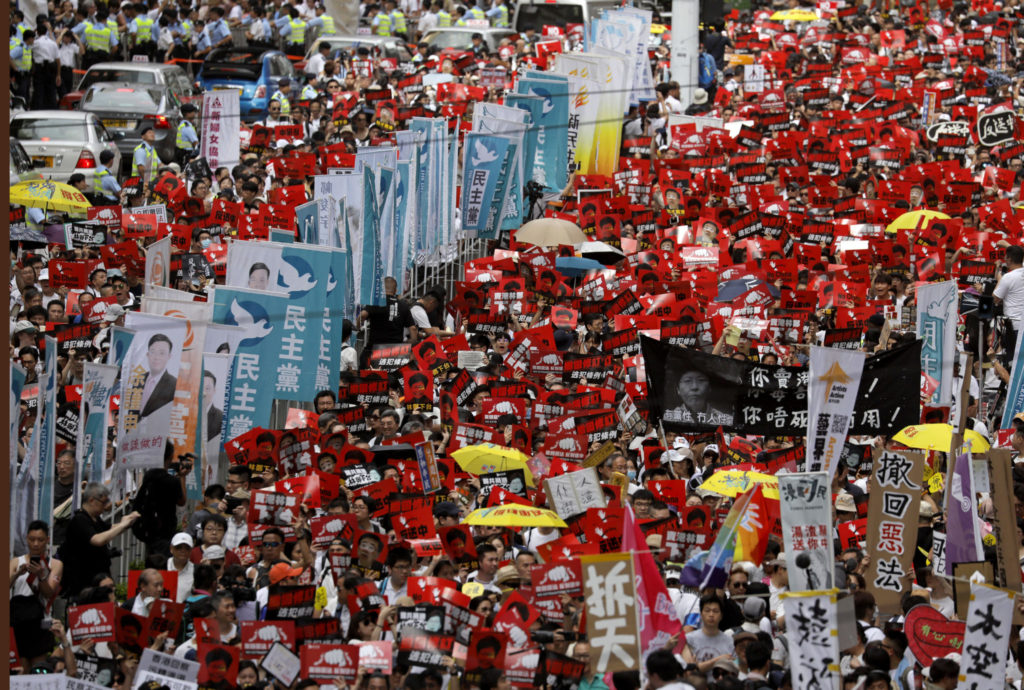 Protesters march along a downtown street against the proposed amendments to an extradition law in Hong Kong Sunday, June 9, 2019. A sea of protesters is marching through central Hong Kong in a major demonstration against government-sponsored legislation that would allow people to be extradited to mainland China to face charges.(AP Photo/Vincent Yu)

The paper quotes organisers as estimating more than 500,000 people have been taking part, while police said more than 150,000 demonstrators initially set off from the city's Victoria Park.

As crowds flocked to today's demonstration, transport officials reported disruptions on the city's metro lines due to overcrowding.

Reuters reports that protesters chanted “no China extradition, no evil law” as they marched through the city streets.

Main image: Protesters march along a downtown street against the proposed amendments to an extradition law in Hong Kong. Picture by: Vincent Yu/AP/Press Association Images

Nine people face extradition after being arrested during Garda operation

Ian Bailey’s latest extradition hearing due to get underway today