HIQA calls for introduction of PrEP programme to prevent HIV

The Health Information and Quality Authority (HIQA) has recommended the introduction of a pre-exp...

HIQA calls for introduction of PrEP programme to prevent HIV

The Health Information and Quality Authority (HIQA) has recommended the introduction of a pre-exposure prophylaxis (PrEP) programme to prevent HIV.

It has published a health technology assessment in which it calls for the treatment for populations "at substantial risk" of sexual acquisition of HIV.

HIQA has advised Health Minister Simon Harris that the successful implementation of a national PrEP programme in Ireland would be "safe, effective and cost-saving."

Following a public consultation, the assessment was approved by the board of HIQA this week and has been submitted to Minister Harris for his consideration.

A fixed dose combination tablet has been licensed and available for use as PrEP in Ireland since 2016.

It involves the pre-emptive use of oral antiretroviral therapy in HIV negative people to prevent infection. 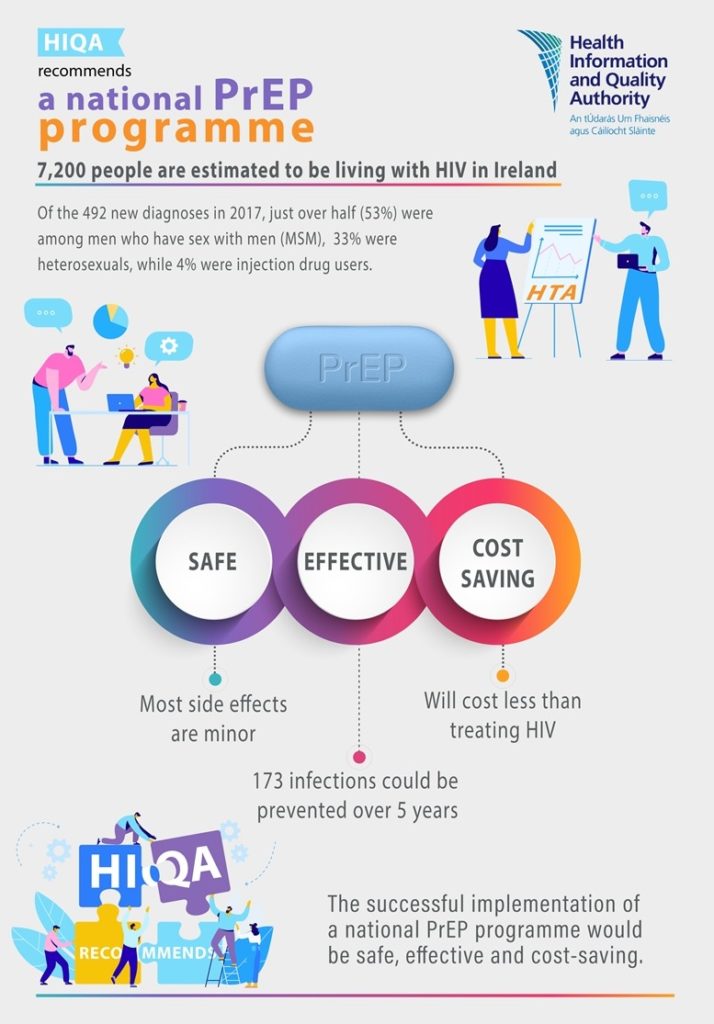 While licensed, it is not reimbursed through the Primary Care Reimbursement Service - meaning those with a prescription for PrEP must pay out-of-pocket.

PrEP is available in at least 49 countries worldwide with 11 countries providing PrEP through national programmes - including Belgium, France, Norway, Portugal and Scotland.

"There were 492 diagnoses of HIV notified in Ireland in 2017. Just over half of all notifications were in men who have sex with men."

"From reviewing the evidence, HIQA has found that PrEP is safe and highly effective at preventing HIV in people at substantial risk.

Dr Ryan added: "The primary barriers to introducing a PrEP programme in public STI clinics in Ireland relate to staffing and infrastructural issues.

"A significant investment in STI services is required for a national PrEP programme to ensure a safe, sustainable and equitable service."