A new network of high-power charging points for electric vehicles is to be rolled out across the ...

A new network of high-power charging points for electric vehicles is to be rolled out across the country.

More than 50 hubs will be built on motorways and national roads while 50 existing charge locations will also be upgraded.

Each charging hub will be able to charge between two and eight vehicles at a time – with six minutes of charging capable of delivering at least 100km of electric driving range.

The upgrades to existing charge locations will more than double their output. 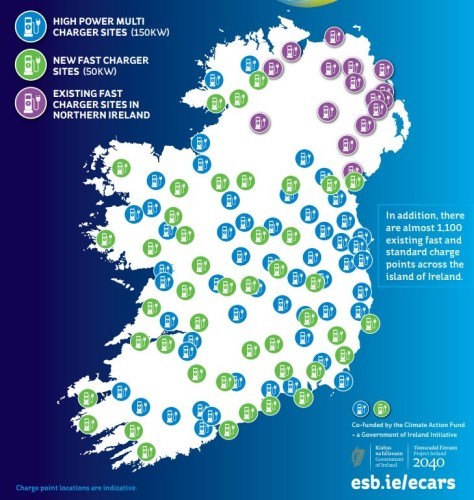 A provisional map of the planned network. Image: Department of Communications

The Minister for Climate Action Richard Bruton said the project, funded by the Government and ESB, aims to tackle “range anxiety” and encourage drivers to make the switch.

"We are stepping up our response to climate change across the board and this government is determined to take the lead and put in place the necessary infrastructure to make it easier for people to play their part.”

“Now is the time”

He said the upgrade will allow the ESB ecars network to facilitate the charging needs of hundreds of thousands of vehicles.

“This investment gives people confidence that they can make the switch,” he said.

“Now is the time.

“As well as providing a network of chargers, the government also offer a number of financial supports to those thinking of changing their vehicle.”

ESB spokesperson Peter O'Shea said the cost out of the project is being shared equally.

“The total investment runs to €20m and half of this will be funded by the Government’s climate action fund – which ESB ecars successfully participated in last year,” he said.

“The other half will be funded by the ESB.

“From our perspective, this is a really important announcement in relation to Ireland’s climate change plans because transport is responsible for 20% of Ireland’s greenhouse gas emissions.”

He said the project will support the Government’s aim to have more than half-a-million electric vehicles on Irish roads by 2030.

ESB ecars is currently identifying the best locations for the new hubs.