Here's how to safely watch this morning's partial solar eclipse

A rare partial solar eclipse will darken the skies across Ireland this morning for the first time in six years.

The event begins at 10am, with people in the southeast likely to have the best chance to witness it.

At its peak shortly after 11am, almost half the sun will be blocked out by moon.

The event will finish at around 12:30pm. 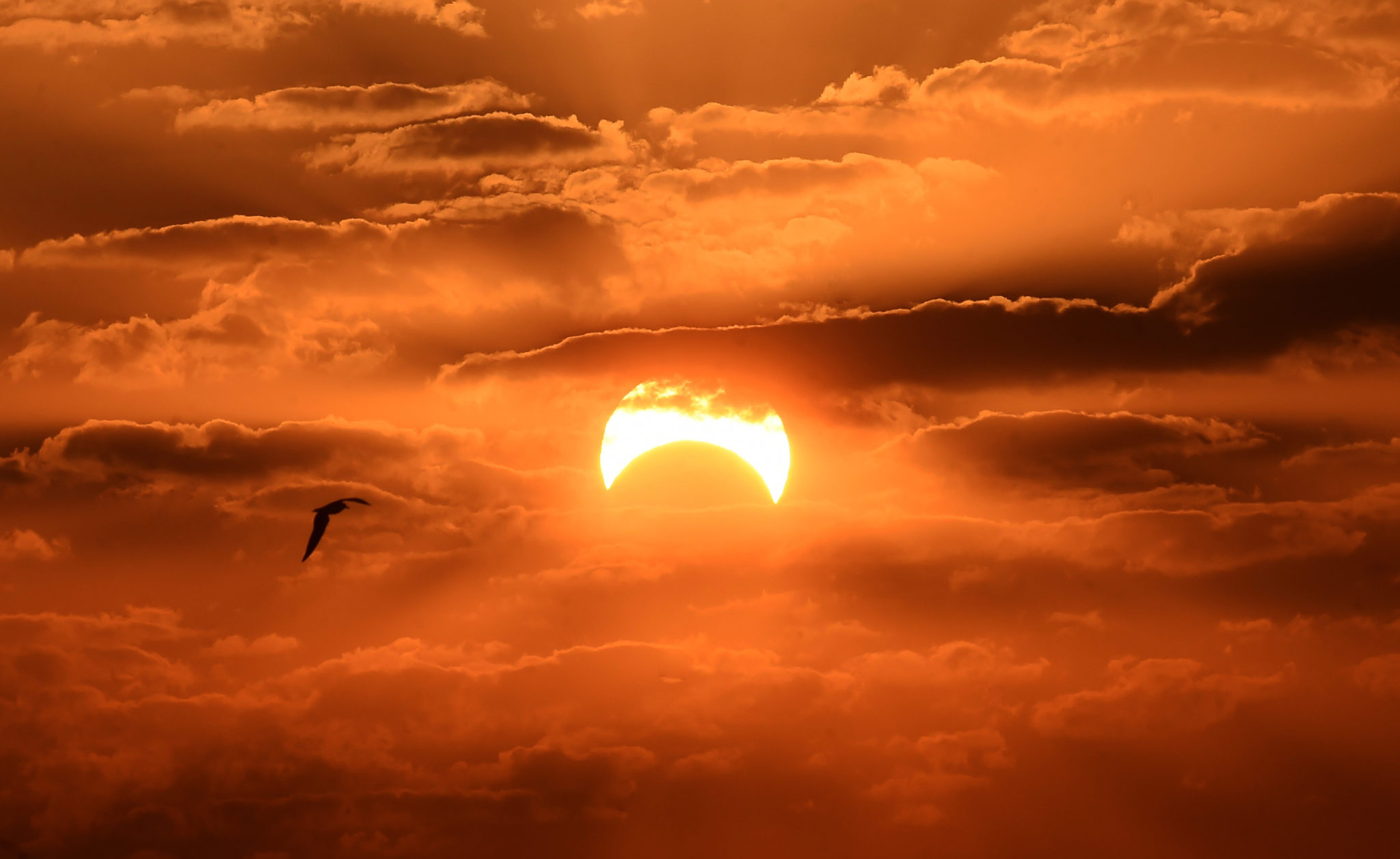 “A few minutes after 11am, about 45% of the sun’s diameter - that equates to about a third of the whole area of the sun - will be covered by the moon,” he said.

“So, we think it might get noticeably cooler and, if it is a lovely clear blue sky, you might notice that the day doesn’t look as bright as it normally should because you have only got two-thirds of the sunlight left.

“Then the moon will move slowly off the face of the sun and it is all over by 12:30.

“We won’t get a better eclipse until 2025, although there is a smaller one actually happening late next year.”

It is extremely dangerous to look directly at the sun - including during an eclipse - as you can seriously hurt your eyes or even go blind.

Luckily, there are still a number of ways to see the event safely.

You can watch through a pair of ISO-compliant solar filter/solar eclipse glasses - although you must remember not to watch through a camera or through binoculars and telescopes even while wearing the glasses. Solar filters must always be placed in front of optical devices while looking at the sun.

The easiest way to watch is to build a pinhole projector.

Take one sheet of paper or cardboard and punch a hole in it. Make sure the hole is round and smooth.

With your back to the sun, hold the paper above your shoulder allowing the sun to shine on it.

Hold the second piece of paper at a distance behind the first sheet and you will see an inverted image of the Sun projected onto the paper through the pinhole.

To make the sun larger, hold the pieces of paper further away from each other.

You can also use the pinhole projector to project the sun onto the pavement or a wall.

You can get similar results using a sieve or a colander to project the image - at the peak of the eclipse, you’ll see lots of tiny crescent suns projected onto the floor or page.

You can also watch in slightly swankier fashion by making yourself a box projector.

Take a long box (or tape two boxes together to get the longer shape.

Cut a rectangular hole at one end of the box and tape a sheet of completely flat and unwrinkled aluminium foil paper over the hole.

Use a pin to poke a tiny hole in the centre of the foil.

Tape a sheet of white paper on the inside of the far end of the box.

Stand with your back to the sun and place the box over your head the pinhole towards the sun.

Adjust your position until you see the sun projected onto the sheet of paper. 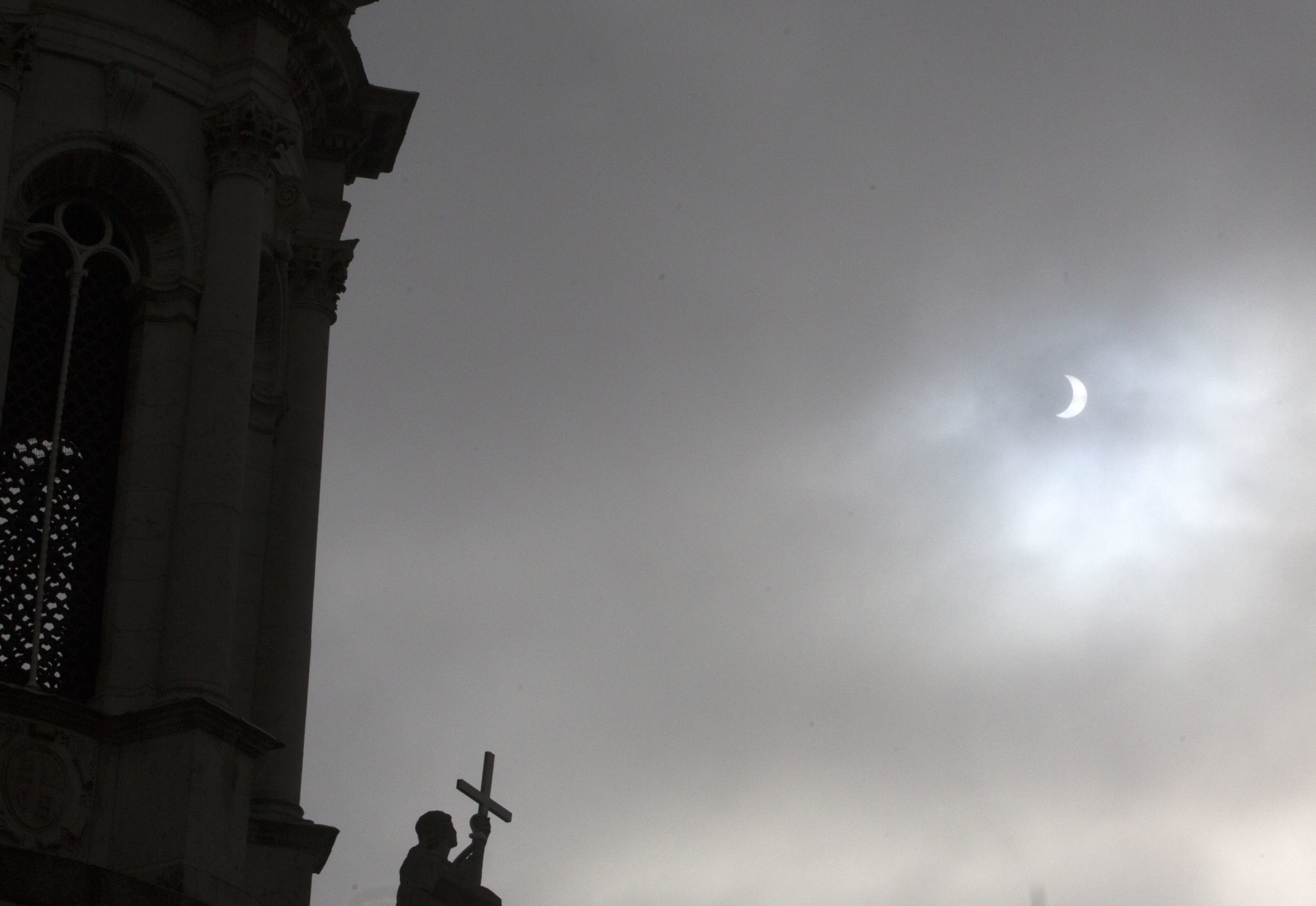 A partial solar eclipse appears briefly through the clouds beside the Campanile in Trinity College Dublin, 20-03-2015. Image: Photocall Ireland!

It is the deepest partial eclipse in Ireland since March 2015 and Astronomy Ireland has said the country will not see anything deeper until March 2025.

Ireland's last total solar eclipse was nearly 300 years ago and the next one is not due until September 2090.

"Total solar eclipses are even spectacular but they are extremely rare," said Mr Moore.

"You will only see one every 400 years if you don't move so we have got eclipse trips to the USA, Turkey and Bulgaria.

"We are planning the next one in 2024 to Mexico to see the total eclipse of the sun and that is when day turns to night. I have never seen anything like it before in my life."