More than half (51%) of nursing homes have reported at least one confirmed COVID-19 case, accordi...

More than half (51%) of nursing homes have reported at least one confirmed COVID-19 case, according to a new HIQA report.

The report, which has been published today, says inspectors had concerns around a 'number of nursing homes' regarding how COVID-19 outbreaks were being managed.

It says an emergency closure order was granted by a court for one home as the Chief Inspector was "sufficiently concerned regarding the management and systems in place to keep residents safe".

According to HIQA, the first confirmed case of COVID-19 in a nursing home here was reported on 13th March - 'quite early in the evolution of the virus in this country'.

Staff had to quickly adapt to 'frequently-changing' national guidelines on managing the virus, while dealing with a range of challenges faced across the health sector during the early stages of the pandemic.

Some nursing homes had inadequate access to outdoor spaces and lacked storage space, while staffing issues and lack of access to PPE were among the other concerns raised.

The report highlights that 29 members of staff tested positive for the virus at one centre, and this resulted in knock-on effects to care for residents.

HIQA says many residents in Ireland's nursing homes were fearful, confused and angry during the pandemic.

It also highlights that officials were informed of a 'significant increase' in unexpected deaths in nursing homes during the pandemic.

HIQA said that while they cannot validate whether the deaths were directly related to COVID-19, it still shows the "devastating impact" of the virus in homes.

Officials confirmed in March that 900 nursing home residents had died due to COVID-19. 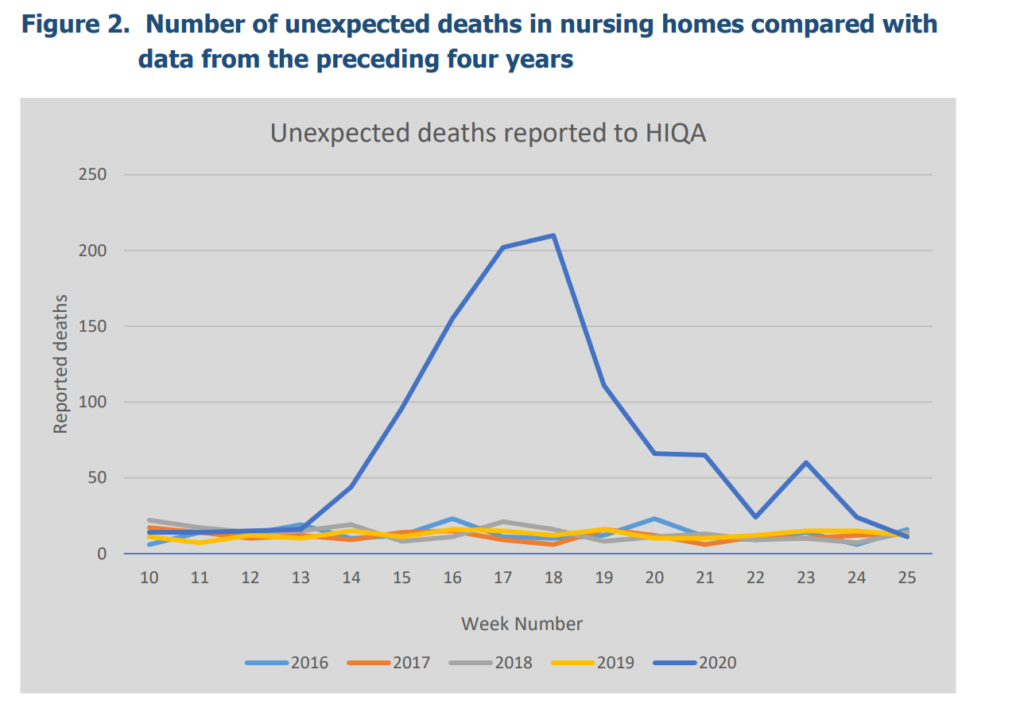 The watchdog says the pandemic shows the nursing home system here now needs to be reformed and overhauled.

The authors of the report say: "Some nursing homes were unable to comply with the relevant regulations through a combination of poor governance, a lack of planning and outdated facilities and premises.

"As a result of COVID-19, it is absolutely vital that premises are modernised as a matter of urgency in order to facilitate physical distancing requirements, promote modern infection prevention and control practices, and provide residents with the dignity and privacy they deserve.

"Reform of the regulatory framework and current models of care for older people is essential.

"As a country we must explore alternative, more suitable models of care, such as homecare and assisted living, and integrate clinical oversight in nursing homes."

HIQA says that many of the issues that arose in March have now been resolved, but the agency has called for clarity on a 'rolling test programme' for staff in homes.

The watchdog also notes that residents in the homes were "without exception" deeply grateful to staff for the care they provided in "extremely challenging circumstances".