Growing up in Ireland: More than one-quarter of young people either overweight or obese

More than a quarter of Irish 17 and 18-year-olds are either overweight or obese, according to a major new report.

The Growing Up In Ireland survey finds that one-in-five are overweight and 8% are obese.

The study also threw up a gender disparity when it comes to weight and physical activity – with 30% of young women likely to be overweight or obese compared to 25% of young men.

More than three-quarters of young men said they are meeting the World Health Organization’s recommended weekly physical activity levels – compared to just over half of young women. 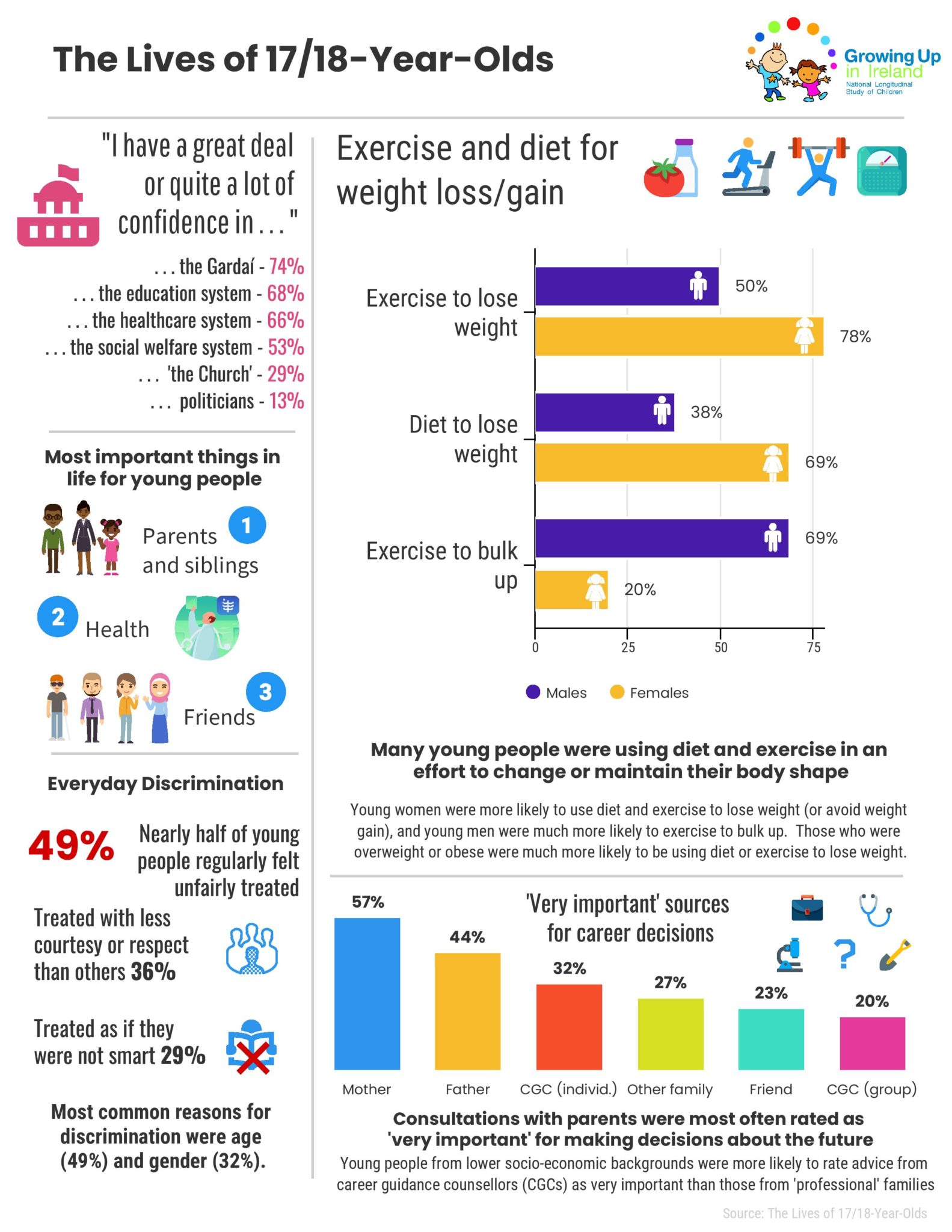 The Growing up in Ireland report. Image: ESRI

On Breakfast Briefing with Andrea Gilligan this morning, ESRI Research Analyst Eoin McNamara said the gender disparity has been noticeable since researchers began following the lives of the young people when they were nine years old.

“It was always the case for us that young women were reporting slightly higher levels of overweight and obesity.” he said.

“One of the key predictors for obesity would be physical activity levels and what we also see is a similar disparity there so that young men are more active than young women.

“So, we explored that in more detail and asked them what sort of things they like to do with their free time and young men are saying they like active pursuits like going to the gym or playing sports – be it team or individual.

“While women like to do those things too, they also value other things like reading or musical pastimes and spending time online – slightly more than young men.”

He said the finding highlights a need for improved resources and facilities to encourage people to take part in health, active past-times.

Growing up in Ireland

The Growing Up In Ireland survey involves interviews with over 6,000 young people and their parents.

Mr McNamara said there were plenty of positive findings in the latest round of interviews – with the vast majority positive about their education, health and relationships with their teachers.

He said 80% of Irish parents expect their children to go on to third-level education – with similarly high expectations among the young people themselves.

He said nearly 30% of those involved said they had taken on some form of volunteering work in the last year.

“Overall, that is a really positive finding, it points towards good social engagement amongst these young people,” he said.

“Particularly in light of the fact they are at a stage, at age 17 and 18, where they have a lot of exam pressures preparing for the Leaving Cert.

“So, the idea that we a have a sizable proportion of them volunteering is really positive and they are putting in quite a good few hours with that as well.”

Mr McNamara also called for increased investment in youth mental health services – with 20% agreeing that they had experienced depressive symptoms.

There were more young women in the ‘likely to be depressed’ range (24%) compared to young men (16%).

You can listen back to the full interview with Eoin McNamara here: