New figures show the Irish grocery market grew by 3.5% in the 12 weeks to the end of February. Ka...

New figures show the Irish grocery market grew by 3.5% in the 12 weeks to the end of February.

Kantar Worldpanel has said this puts the sector on a solid footing, as the UK finalises preparations to leave the European Union.

It said that an upward trajectory in grocery prices has made a significant contribution to growth.

Grocery prices rose by a further 1.5% in the most recent 12 weeks, marking the first time an increase has been recorded for four consecutive periods since February 2017.

Prior to this a number of factors had contributed to the lengthy spell of deflation - such as intense price competition between retailers.

Kantar said the continued growth of Aldi and Lidl - which now account for 11.2% and 11.0% of the market respectively - has encouraged the three traditional retailers to bolster their value credentials by launching promotions such as Tesco's 'The 800' campaign, Dunnes' 'Everyday Savers' and SuperValu's 'Fill Your Trolley'.

Douglas Faughnan, consumer insight director at Kantar Worldpanel, said: "A stronger euro to sterling exchange rate has made British imported goods and ingredients cheaper, allowing retailers to pass some of those savings on to Irish consumers.

"However, with prices already rising as Britain's exit from the EU draws near, increases are likely to continue for the rest of the year." 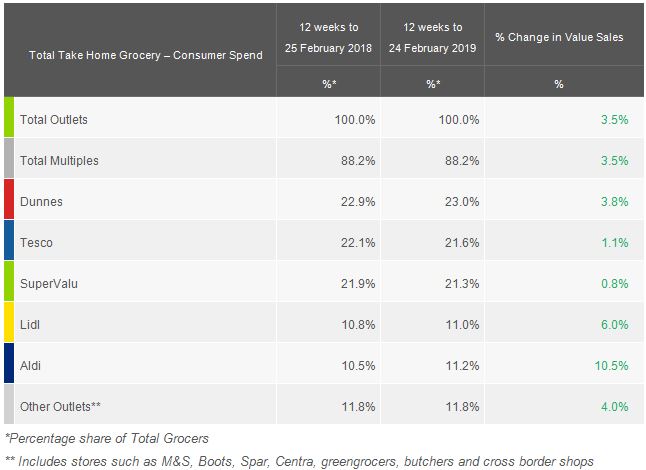 More than €3.5bn of food is imported to Ireland from the UK, which means currency fluctuation can have a substantial impact on grocery prices.

Wine and chocolate sales also saw a Valentine's Day boost, with supermarkets cashing in from those choosing to celebrate at home.

Valentine's Day helped drive overall sales of chilled ready meals and chilled desserts, which grew by 8.4% and 6.9% in the past three months.

Wine and chocolate confectionery sales also increased by 17.1% and 10.7%.

Following a strong festive period, both Aldi and Lidl continued their strong start to the year, growing sales by 10.5% and 6.0% respectively.

While both Tesco and SuperValu saw their overall market shares decline, the pair did enjoy positive sales growth of 1.1% and 0.8%.