A Garda member was sanctioned after they failed to investigate a complaint of sexual assault of a...

A Garda member was sanctioned after they failed to investigate a complaint of sexual assault of a minor in a timely fashion.

According to the Garda Síochána Ombudsman Commission (GSOC) annual report for 2019, they also failed to update the complainant on the investigation.

The member in question was found to be in breach of discipline regulations for neglect of duty and disobedience of orders.

The investigation began after a member of the public complained to GSOC about the length of time it took for Gardaí to investigate allegations he had made.

The complainant alleged that a relative, who was a child, was being groomed by a man.

He also complained he had not been kept informed of the investigation into his complaint - nor had he been updated as to the direction of the Director of Public Prosecutions (DPP).

Disciplinary proceedings were taken by An Garda Síochána and the Garda member was sanctioned. 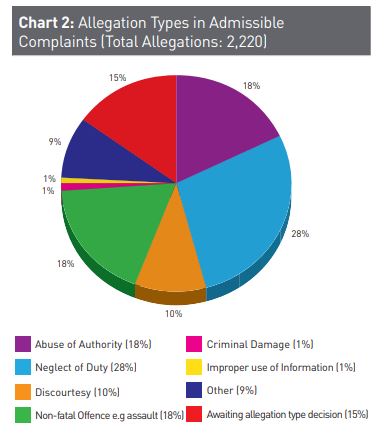 Overall last year, the report says 1,756 complaints were opened with 2,885 allegations contained in those complaints.

And a total of 1,896 complaints were closed.

There were also 40 referrals from An Garda Síochána of matters where it appeared 'the conduct of a member of the Garda Síochána may have resulted in the death of or serious harm to a person'.

While 44 public interest investigations were opened - these are investigations undertaken in the absence of a complaint or a referral from the Garda Commissioner.

And 31 protected disclosures were also received.

The report also notes GSOC's concern about the fact that the force continues to conduct criminal investigations of its own members, without the knowledge or participation of GSOC.

"The issue has been raised by the Ombudsman Commission in discussions with Garda Commissioner Drew Harris and in the context of discussions on forthcoming legislation which will replace the Garda Síochána Act, 2005", GSOC says.

"The Ombudsman Commission believes the new legislation should make explicit provision for independent oversight of all complaints against Garda members regardless of the origin of the complaint."

Significant developments for GSOC  also included a major expansion in staff numbers on foot of an increase which was sanctioned towards the end of 2018.

The body says the increase in staff allowed for a greater number of investigations, which might previously have been referred back to An Garda Síochána for investigation, to be carried out by GSOC.