The Former Yugoslav Republic of Macedonia has officially changed its name. As of Tuesday, the sma...

The Former Yugoslav Republic of Macedonia has officially changed its name.

The change ends a naming dispute that has roiled with neighbouring Greece for some 28 years.

It also secures the country's accession into NATO.

A series of adjustments - such as new road signs and updated passports - will be made gradually.

While the government website has already been changed to reflect the new name.

"This is a new page in our history. Long live the Republic of Northern Macedonia".

The country's Foreign Minister Nikola Dimitrov said: "May today be the beginning of a long friendship between Greece and North Macedonia.

"We can't change our past, but we can and we will shape our future of friendship, partnership and cooperation."

We have just exchanged the final note verbale: Prespa Agreement enters into force! May today be the beginning of a long friendship between Greece and North Macedonia. We can’t change our past, but we can and we will shape our future of friendship, partnership and cooperation.

The dispute stretches back to 1991, when the former Yugoslav Republic of Macedonia declared its independence from Yugoslavia and announced its intention to be named 'Macedonia.'

Neighbouring Greece refused to recognise the name, insisting that only the northern Greek region of the same name should be called Macedonia.

It also argued that the former Yugoslav Republic's use of the name was a challenge to Greek sovereignty. 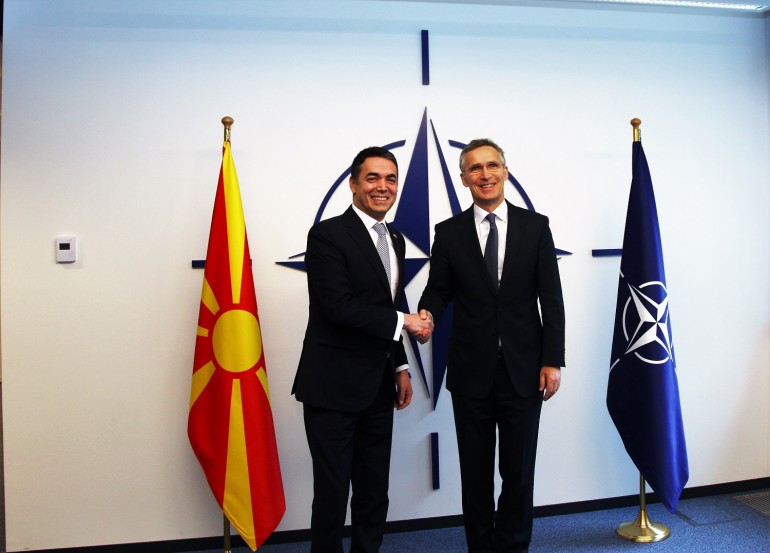 Although more than 100 countries formally had recognised the country as Macedonia, the United Nations and other international bodies used the term Former Yugoslav Republic Of Macedonia.

The North Macedonia parliament and the country's citizens approved the change in a referendum held in September 2018.

Matthew Nimetz, the UN chief's personal envoy, had been engaged with the process for nearly two-decades.

Mr Nimetz said the historic Prespa Agreement between two neighbours "opens the door to a new relationship between them and ushers in a new era for the consolidation of peace and security in the Balkans."