A former loyalist paramilitary has warned that Brexit tensions in the North could soon lead to “active, orchestrated loyalist violence.”

In a special report for The Pat Kenny Show this morning, Newstalk reporter Barry Whyte spoke to members of the unionist community about the ongoing tensions over the Northern Ireland Protocol.

The protocol, which keeps the North in the EU single market for goods, is included in the Brexit Withdrawal Agreement to prevent the return of a hard border in Ireland.

The former paramilitary told Barry that young loyalists are gathering information on people they view as “legitimate targets” – including members of Northern Irish political parties and the Irish Government.

“Unless something major changes in weeks or possibly months, I could see violence,” he said.

“It might start off low-key. It could be interface violence or rioting between teenagers but if this continues on this path, you are going to see active, orchestrated loyalist violence.

“I know, at the minute, there are discussions – there are young loyalists involved using encrypted messaging apps talking to each other.

“People starting to gather intelligence, addresses and car registration numbers of people they would regard as legitimate targets.”

Why are unionists and loyalists so angry about the Northern Ireland protocol?

“Leo Varadkar, I would not advise him to come to Northern Ireland without some kind of security,” he said.

“He is a hate figure here now because of the constant threats he was making about, if you put any kind of hard border between Northern Ireland and the Republic, you are bringing back IRA violence.

“Loyalists are looking at that now saying, if Leo Varadkar can make those kinds of threats, why can’t we do the same in order for us to get our way?

“So, there are plenty of targets. We have even seen threats against border post staff. Even if some of those people live in Loyalist areas, they are implementing this Irish Sea border so they are making themselves targets.

"There is no brinksmanship here as far as loyalists are concerned. If we continue down this path, there is going to be violence in Northern Ireland. 100%.” 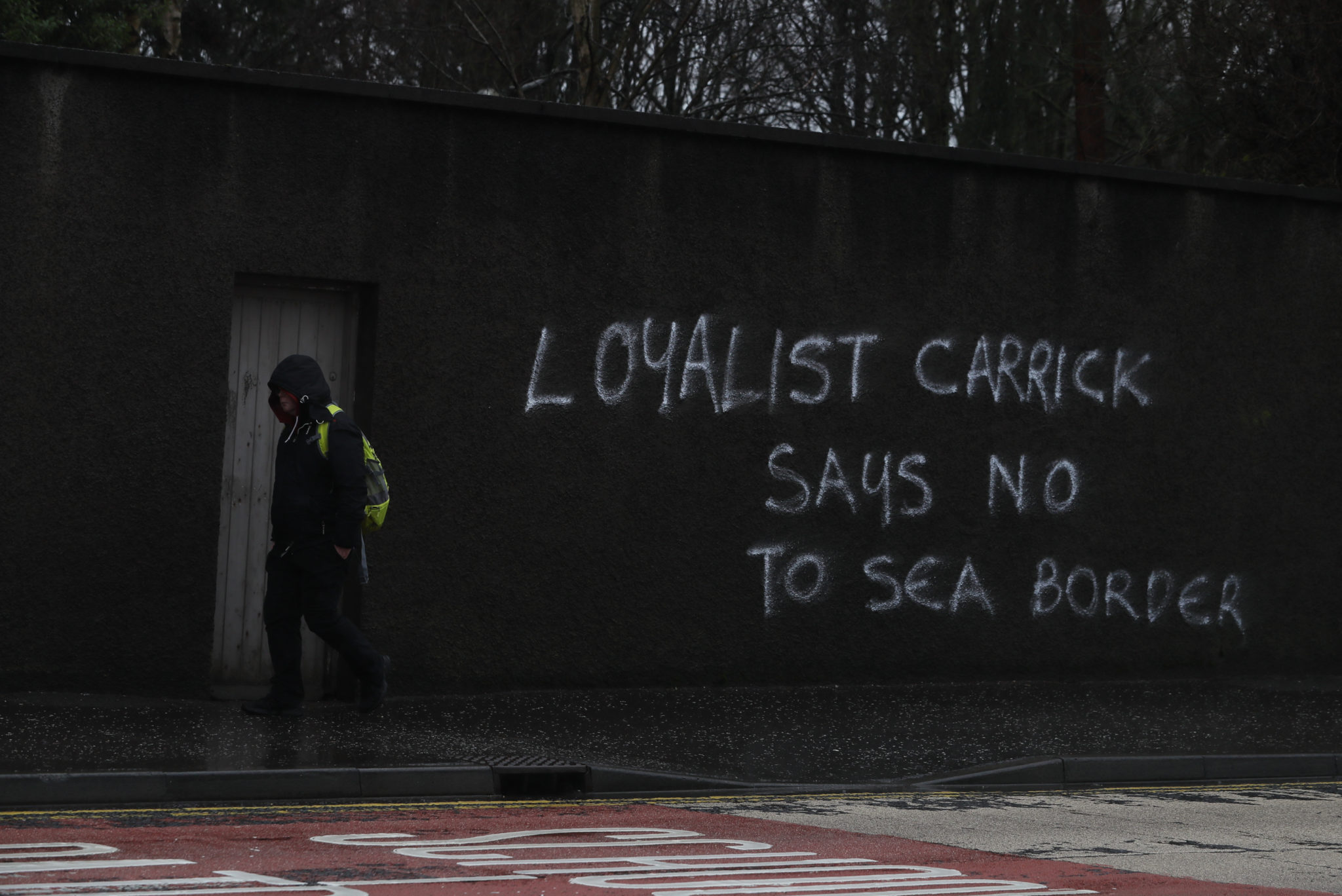 Graffiti on the A2 outside Carrickfergus in Belfast, 03-02-2021. Image: Brian Lawless/PA Wire/PA Images

The Tánaiste has never made any violent threats of any kind; however, in October 2018, he warned that any hard border in Ireland could become a target for violent paramilitaries.

At the time he showed fellow EU leaders a newspaper clipping which reported on an IRA bombing at a Newry Customs Office in which nine people were killed and six people were injured.

Tensions over the protocol came to a head earlier this month when physical checks on food and animal products were suspended at Belfast and Larne ports due to an “upsurge in sinister and menacing behaviour.”

The PSNI later said there was no evidence of ‘credible threats’ against any port workers.

Could there be a return of Loyalist violence if the Irish Sea border isn’t scrapped?

The CEO of Cooperation Ireland, former PSNI Assistant Chief Constable Peter Sheridan told Barry that anger and graffiti is one thing, but we should not assume it will lead to terrorism.

“Sometimes, when we talk about violence on this island, the spectre of bombs and bullets looms large rather than, in other places, where people protest or put posters up lampposts,” he said.

“The graffiti does not seem to be organised graffiti. There are always going to be people who will react themselves and take actions themselves but we can’t minimise the fact that some people will feel threatened by it.

“But, as I understand it at the minute, both from people in the loyalist community and unionist community, people are not considering violence in terms of what we would have known as violence in this community.”

Reporting from Barry Whyte in Belfast