A man who lost his infant son has said men must speak up about the grief of losing a child. Ian L...

A man who lost his infant son has said men must speak up about the grief of losing a child.

He told Newstalk Breakfast dealing with such loss cannot be swept under the carpet for parents.

He said the day his son was born was one of the greatest.

"It was as any father, any parent can imagine one of the greatest days of your life. It's a very special and time for celebration."

But Hank was taken immediately to the Special Care Unit and died the next day.

"This is something that happens every single day in Special Care Baby Units all over the country.

"It's a sad reality, but something we as a society brush under the carpet - as it were.

"When a spouse loses a partner they become a widow or a widower, when a child loses their parents they become orphaned - but there's no language for a bereaved parent, particularly a parent of infant loss, so we don't exist".

Ian said he went down a self-destructive path.

"I found comfort in food - it became almost like an addiction to me.

"In the aftermath of Hank's death, the only place I really found comfort was through comfort eating.

"You'd wait for people to go to sleep in the house and you'd sneak out to the chipper.

"And you'd order so much food that you'd ask for an extra fork, because you're too embarrassed to admit that that's all for you".

"And then you feed yourself late at night, and that adds up."

'A course to death'

Ian said he subsequently became morbidly obese and admitted: "I stopped weighting myself at around 25 stone - which is 350 pounds.

But he said he turned a corner after he met other people going through the same trauma at a bereavement group.

"I was sitting at a table with other fathers, we sat down, we all told our stories - and what I realised at the meeting was that we were all telling the exact same story.

"It was the first time in seven years that I didn't feel alone - I left that meeting with a smile on my face, and really felt like a weight had lifted.

Ian said he now actually runs every day, which he said happened "completely by mistake".

"I was out one day walking my dog around a bog near to where I live and I just found myself running.

"And I was elated and I started laughing out loud while I was running - like this eejit alone on a bog with his dog, laughing like a fool running".

He said he then went to a sports shop and bought "the cheapest pair of running shoes that were on sale". 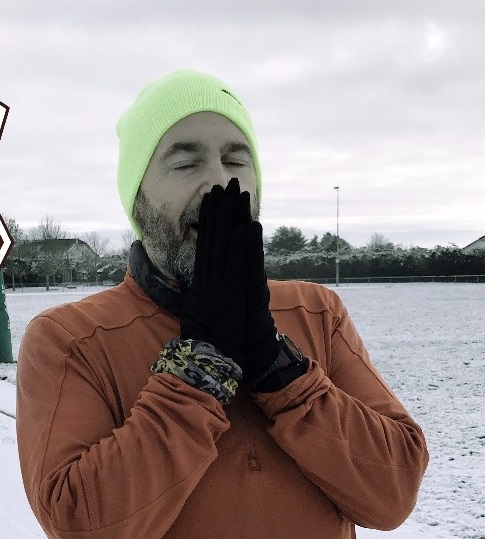 He then trained himself up to a 5k distance over the course of three weeks.

"Then just over two years later I completed 10 marathons in 10 days - finishing on Hank's 10th birthday".

Ian has appealed to other men to speak up and ask for help.

"For seven years I hid away within myself and was on the verge of death, that's how much of a debilitating effect it had on me - by not admitting it, by keeping it to myself and not seeking help.

"Because that group of fathers, that meeting that I had, had such a profound effect on me I just want to encourage other dads, bereaved fathers who are hiding, who are not acknowledged and who are expected by society to 'be a man, to grow a pair' - whatever the heck that means.

"My philosophy now is to speak up, not man up".

Ian has set up a 'Running for Hank' GoFundMe page