He was speaking after a global study found Irish people, above all others surveyed, regret getting drunk.

The Global Drug Survey found, on average, respondents from Ireland felt the most regret - while those from Denmark had the fewest regrets.

It examined data from 32,022 people in 22 countries, with 28.4% of Irish people saying they regret after drinking. 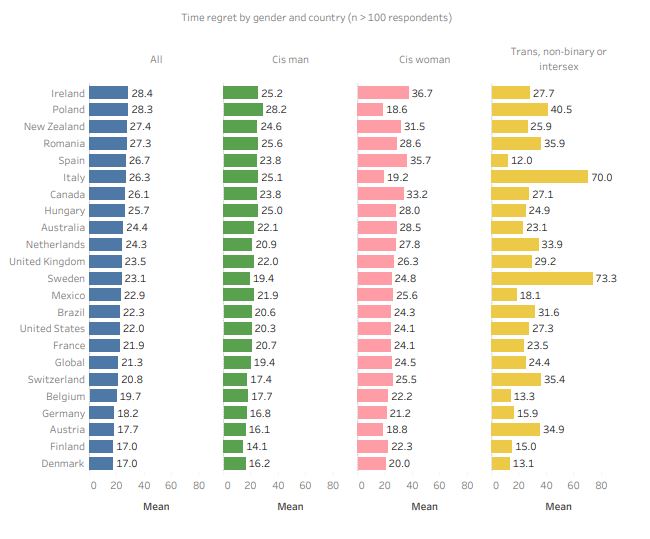 The top reasons for regret include drinking too much too quickly, being with big drinkers, taking other drugs and starting to drink earlier.

Hotelier Noel Cunningham, who is a recovering alcoholic, told The Hard Shoulder drinking can lead to real problems.

"Maybe I am not not the right person to answer, because my journey with drink has been traumatic insofar as I'm a recovering alcoholic.

"And I speak openly about it, because I hope in doing so it helps others too.

"We start our drinking life kind of puritively and behind, perhaps, our parents back and thus we progress.

"And along the way there are several regrets - several days of regrets and several mornings of regrets - and yet we don't seem t learn from it.

"And then in some cases, like myself, you end up with a real problem.

"But generally in our country, our relationship with alcohol is an unhealthy one."

Noel says he always had regrets when he drank.

"Absolutely - and in order to get on a path to recovery, and to live in recovery, you still have to revisit those regrets - and put them hopefully in the place they belong.

"There isn't a person in Ireland... everybody I know, at some stage, says 'I wish I hadn't done that'.

"But then we forget the very negative aspect of the drinking.

"It's kind of a cancerous thing in our society that these regrets, associated with alcohol, are very much part of our everyday life".

'The be all and end all'

He says this time of year is the perfect opportunity to turn things around.

"We should maybe try to aim for a Christmas of no regrets: enjoy a drink, have a drink, but not to completely feel... that you have to go on Boxing [sic] night and drink every bar in town dry.

"Us and alcohol, it's just going to be one of those discussions that will be forever on the table.

"From my point of view, I'm always anxious that young people - if there are young people in our homes - that we kind of have a responsibility.

"No harm having a regret about having a good oul drink last night, but let's not make it the be all and the end all that those regrets are part of our every weekend of the bloody year and every celebration."

And he believes things may be starting to change - especially with younger women.

"I'm kind of leaving it to the girls, I just like the kind of mild music that's sort of beginning to sound.

"Girls and groups of young girls are going out, and somehow or other they have a healthier approach to the whole business of going out for a few drinks".

But he adds: "Lying around the streets at night, inebriated, causing fights and rows and having alcohol the beginning/end of everything: it's not cute, it's not smart, it's not clever, it's just not attractive in any way.

"And I really think that maybe the tide is beginning to turn".

Anyone affected by issues raised in this article can contact Alcoholics Anonymous on 01-842-0700, or find a list of services here