More than €43m was paid out in insurance claims on behalf of 28 local authorities in the first ...

More than €43m was paid out in insurance claims on behalf of 28 local authorities in the first nine months of this year.

Local authorities are insured by Irish Public Bodies, which deals with claims for issues such as slips and trips on footpaths, and damage to cars caused by potholes.

According to details released under the Freedom of Information Act, €43.3m worth of claims were settled on behalf of 28 of the 31 local authorities in Ireland in the first nine months of this year. 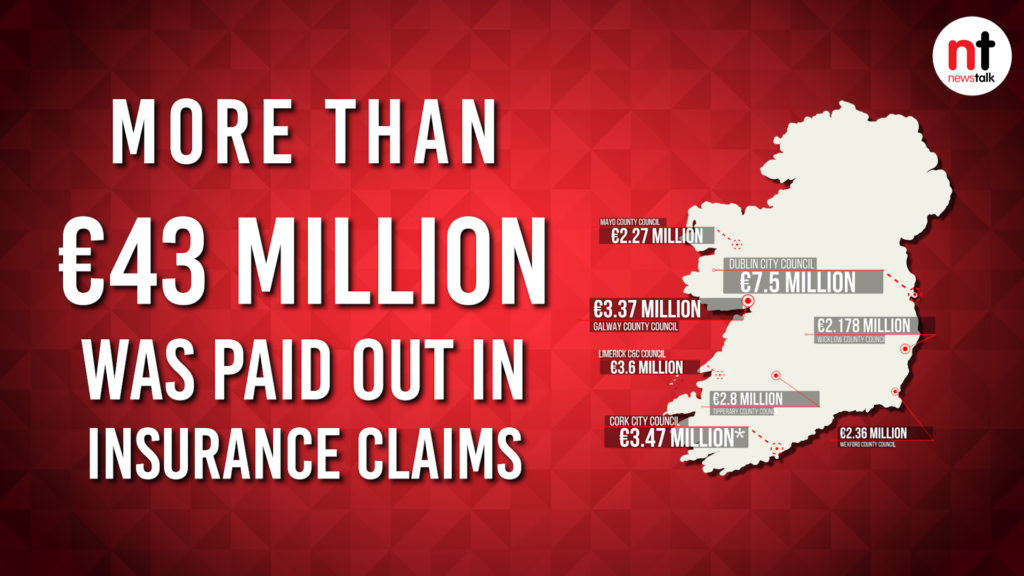 The highest number relate to Dublin City Council, with €7.5m worth of settlements.

Limerick City and County Council is next, at €3.6m, followed by Cork City Council at nearly €3.5m including legal fees.

Twelve councils settled more, money-wise, in the first three quarters of 2019 than in all last year.

Three local authorities were not in a position to provide their figures at this time.

Roscommon-based solicitor Sean Mahon says he believes more of these cases should be fought.

"There's a tendency to kind of allow these things to run to the extreme - run to the very end - without making a calculated decision, at an early stage, that you will resolve the claims where you are exposed... resolve it early and minimise the legal costs".

"Where it is that you are of the view that you're not responsible for the accident then stand by your view and be prepared to fight it."

"You'll take a view, a commercial view, the legal costs associated with fighting the case are too great [and] offer him something to go away.

"That's no way to run a business".

"I don't believe that people's actions or people's attitudes will change if they think that something might come out of it at some point in time.

"Let a claimant know early on that this is going to be fought.

"And if a fight a few of them, word will get out".