A Dublin pub owner has opened up about the online threats and abuse he has received since announc...

A Dublin pub owner has opened up about the online threats and abuse he has received since announcing his plans to reopen for indoor dining.

The Balgriffin Inn on the Malahide Road reopened its doors for the first time since Christmas yesterday.

On Lunchtime Live this afternoon, he said he has been receiving online death threats and abuse ever since posting his new menu in preparation for reopening.

“Within 24 hours, we were called everything from Nazis to Hitler and all this kind of messing - with people saying I hope your pub burns down, you deserve everything you get; you’re spineless and cowardly - you know all this,” he said.

“All we did was put our new menu up and ask people to be patient with us as we work with difficult guidelines.

“We got a phone call last night from a chap saying he was planning a protest and a riot outside the pub today for 200 people.

“I saw another pub in Finglas walked in this morning and found graffiti on the door saying ‘two-tier scum.’”

Mr Venham said he only opened the pub two years ago and found himself shut down just seven months later.

He said he doesn’t personally agree with the restrictions but has no choice but to open his pub if he wants to keep the business alive.

“It was always the end goal, the light at the end of the tunnel, to be able to open and welcome people back,” he said.

“We honestly believed yesterday would have been a day to hang out the flags – the first sign of properly coming out of lockdown; opening up to stay open and a really positive day.

“From the minute we put the menu up on Friday night, to see the abuse come in. We were sat there saying, ‘oh my God have we got this totally wrong?’

“We have been working towards this day for months and I’ve got new seating, new flooring, a new cocktail area – I’ve borrowed more money to get this right for this exciting day of reopening and to be just met with trolls and abuse and phone calls, messages, threats for opening our business …” 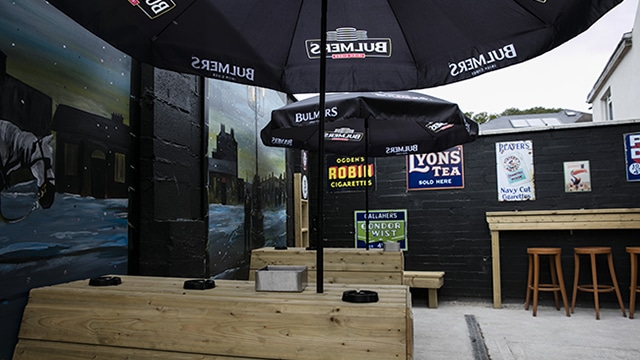 The Balgriffin Inn on the Malahide Road

He said he has no choice but to open his business if he wants to keep it afloat.

“For the most part, we don’t agree with a lot of the restrictions but they are the only terms we can trade under,” he said.

“It is a black and white situation where you open the doors and get people back to work or close and stay closed because there are no Government supports anymore.”

He said the pub had a “really good day" after reopening yesterday.

“That showed me that a lot of the keyboard warriors or the trolls or whatever, that’s what they are,” he said.