The Catholic Archbishop of Dublin, Diarmuid Martin, has said he is worried anti-mask protesters will attract young people who are 'frustrated and aggressive.'

A number of protests have been held in different parts of the country against the use of masks and other lockdown restrictions.

However, Archbishop Martin said those who take part often have different agendas.

He told Pat Kenny his car was attacked by a similar group at Croke Park.

"There are people who do this simply out of lack of responsibility, and we've had examples apparently even in public figures.

"But then we've got people who do this as an ideological thing, and that's the group that worries me. 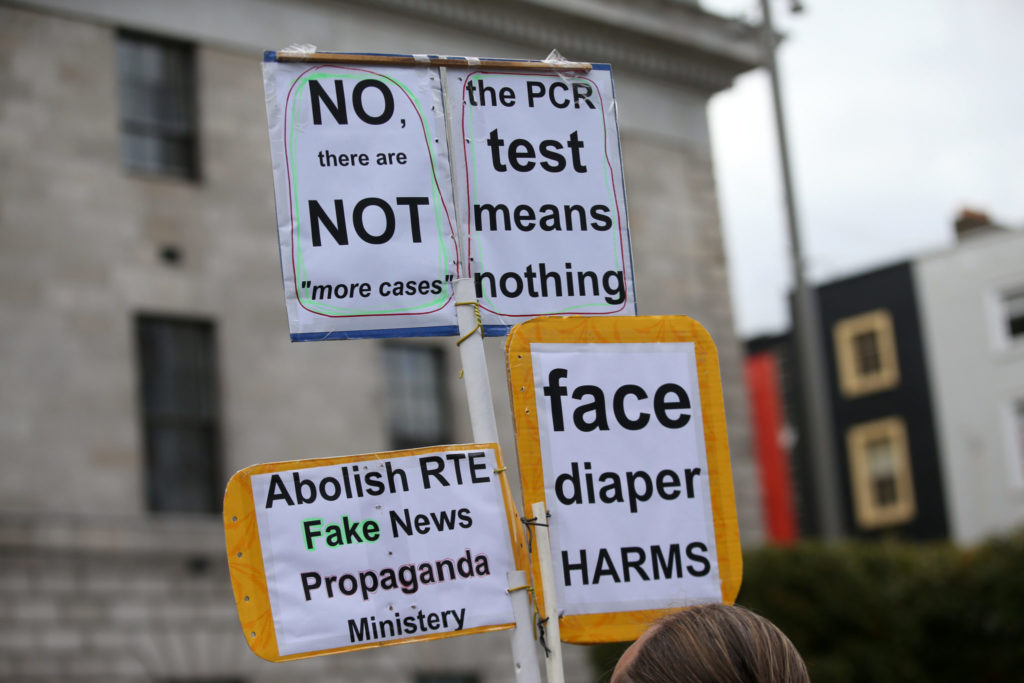 Signs from an anti-mask, anti-lockdown protest in Dublin city. Picture by: Sam Boal/RollingNews.ie

"They do it in a sort of violent way, and it's very often linked with other agendas.

"We're fortunate in Ireland that we never had a political party which was anti-immigrant in its viewpoint.

"Some of those who take part in these anti-mask protests: these are the ones who attacked my car when I attended an Islamic gathering at Croke Park and were extremely aggressive and negative, calling me Satan.

"It is very clear that these are people who do not want to understand what religious tolerance means in the Ireland of today, and it's part of an agenda.

"They're small groups, they're well organised.

"What worries me is they may attract and draw in to their strange ideology young people who are frustrated and aggressive.

'The danger is there'

"And that's what happened in other parts of Europe, for example some of the neo-Nazi parties are groups of unfortunate young people who are being instrumentalised by them.

"I'm not saying they're neo-Nazi, but the danger is there".

"We've seen some of these right-wing negative groups then provoke clashes on the street by others: we just don't need that at this stage.

"This is a new negative phenomenon, [to] which I've no answer, but all of us should be concerned about it.

"And religious people should be concerned about it, because they are using religious ideology as part of it".

Main image: Archbishop Diarmuid Martin is seen at the World Meeting of Families in Dublin in 2018. Picture by: Sam Boal/Rollingnews.ie

Joe Biden is a 'decent, hard-working person with Irish roots' - former US ambassador