The United Nations has warned that an emergency caused by Tropical Cyclone Idai in south-west Afr...

The United Nations has warned that an emergency caused by Tropical Cyclone Idai in south-west Africa "is getting bigger by the hour".

It has been suggested this could be one of the worst weather-related disasters in the Southern hemisphere.

Five days after the storm made landfall in Mozambique, at least 1,000 people are feared dead there alone.

Victims are reportedly trapped on roofs and clinging to trees awaiting rescue, UN agencies said, while across Mozambique, Malawi and Zimbabwe, tens of thousands of people have lost their homes.

Roads, bridges and crops have been washed away.

Jens Laerke is from the UN Office for the Coordination of Humanitarian Affairs (OCHA).

He said: "We are talking about a massive disaster right now where hundreds of thousands - in the millions of people - [are] potentially affected.

"We need all the logistical support that we can possibly get."

Food distribution in Beira, Mozambique at a school turned into a shelter | Image: WFP/Deborah Nguyen

Although floodwaters have reportedly begun to recede in Zimbabwe and Malawi, allowing some people to return home, the World Food Programme (WFP) warned that Mozambique is facing "a major humanitarian emergency that is getting bigger by the hour".

An estimated 1.7 million people were in the path of the cyclone in Mozambique, WFP spokesperson Herve Verhoosel told journalists in Geneva, in addition to the 920,000 people affected in Malawi and "thousands more" impacted in Zimbabwe.

Aid access is "the biggest challenge", the WFP spokesperson insisted, while the agency reported that staff members who flew over the area inundated since the weekend, when two swollen rivers burst their banks, spoke of "inland oceans extending for miles and miles".

Mozambique, Malawi, Zimbabwe, #CycloneIdai has created "inland oceans running for mile after mile, with water above tree-level" says @WFP on the ground @UNOCHA @WHO. Emergency "bigger by the hour". pic.twitter.com/H82jgydWgE

In Mozambique, WFP aims to support 600,000 people affected by the cyclone, which struck with wind speeds in excess of 150 kilometres per hour.

In Malawi, the UN agency plans to target 650,000 people with food assistance.

Amid the humanitarian response, heavy rain is continuing and more is forecast, according to Clare Nullis, spokesperson for the World Meteorological Organization (WMO).

"The Mozambican President is quoted as saying they are fearing there are more than 1,000 casualties.

UN children's fund UNICEF confirmed the scale of the emergency, noting that 260,000 children have been affected in Mozambique, which bore the brunt of Idai.

The WFP has coordinated airlifts of high-energy biscuits, water and blankets to people crammed on rooftops and elevated patches of land outside the port city of Beira, where 90% of buildings are damaged - including the agency's warehouse and port unloading machinery. 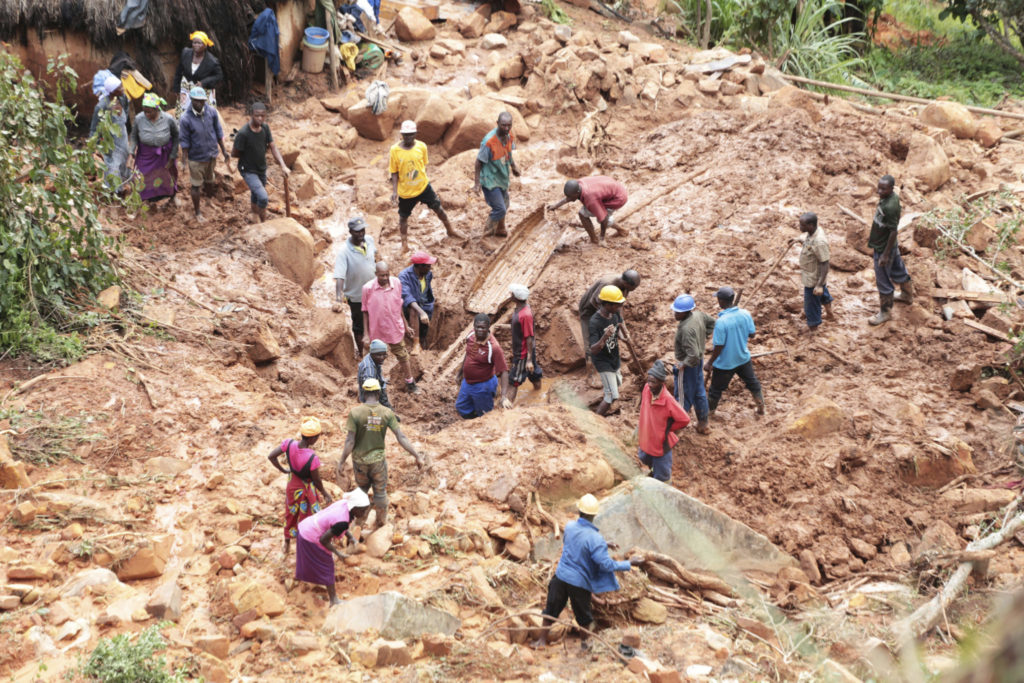 A family dig for their son who got buried in the mud when Cyclone Idai struck in Chimanimani about 600 kilometres south east of Harare, Zimbabwe | Image: Tsvangirayi Mukwazhi/AP/Press Association Images

Four tonnes of biscuits are to be delivered by air, in addition to the 1.2 tonnes dispatched on Monday - part of a 20-tonne consignment flown in from Dubai.

Negotiations are also "at an advanced stage" to bring in two freight aircraft to Beira, including a Hercules C-130, the agency said.

Christian Lindmeier is from the World Health Organization (WHO): "So for the immediate needs, WHO is positioning health kits, emergency health kits, trauma kits and also cholera kits in order to be able to assist people on the ground, as soon as these kits gets there".

Longer-term needs will include dealing with a potential rise in waterborne diseases and rebuilding "many destroyed health centres", the WHO spokesperson added.

The charity Oxfam has activated its 'Emergency Response Team' of water and sanitation, food and livelihood experts to assess the chaos.

But they have been hampered by broken roads, communications and continuing bad weather.

The IFRC and Mozambique Red Cross have launched a 10 million Swiss franc (€8.81m) emergency appeal to support about 75,000 of the worst-affected people in central Mozambique.

A website has also been launched to help people who have lost contact with their loved ones in the affected areas.

Ireland to co-chair International Committee of the Red Cross group