The US President Donald Trump has been seen wearing a mask in public, despite previously appearin...

The US President Donald Trump has been seen wearing a mask in public, despite previously appearing reluctant to endorse their use.

He was visiting a military hospital in the state of Maryland where he met injured service personnel and health workers caring for COVID-19 patients.

The pandemic reached the US in March, and has infected more than 3.2 million people and killed at least 134,000 - a higher number of deaths than in any other country.

But, despite health officials recommending face coverings as a way of limiting the spread of the coronavirus, Mr Trump has previously refused to wear them at public events.

The Associated Press quoted sources close to the president as saying he feared wearing a mask would make him look weak and that it would shift the focus away from the economic recovery.

He has acknowledged that a mask should be worn if people are close together indoors but he has accused reporters of wearing them to be politically correct. 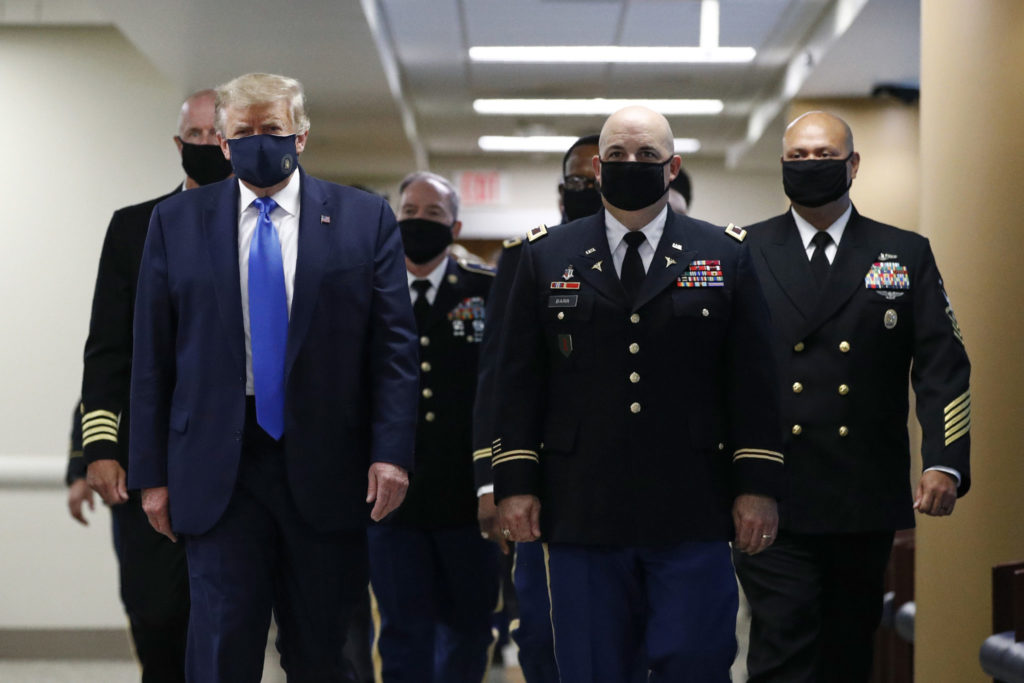 US President Donald Trump (right) wears a face mask as he walks down a hallway during a visit to Walter Reed National Military Medical Centre in the state of Maryland. Picture by: Patrick Semansky/AP/Press Association Images

He has also retweeted messages making fun of his Democratic presidential rival Joe Biden for wearing a mask.

When asked about why he had worn a mask on Saturday, Mr Trump told reporters: "When you're in a hospital especially... I think it's expected to wear a mask."

The only other time Mr Trump has been seen wearing a mask was during a private tour of a factory in Michigan in May but he was reluctant to be photographed.

He said later: "I had one on before. I wore one in the back area. I didn't want to give the press the pleasure of seeing it."

A spokesman for Mr Biden said: "Rather than taking responsibility and leading, (Trump) wasted four months that Americans have been making sacrifices by stoking divisions and actively discouraging people from taking a very basic step to protect each other."

Texas Governor Greg Abbott warned residents "things will get worse", just a day after he said new rules could be imposed if the state could not stop the number of cases from rising.

Main image: US President Donald Trump wears a face mask as he walks down a hallway during a visit to Walter Reed National Military Medical Centre in the state of Maryland. Picture by: Patrick Semansky/AP/Press Association Images