Teens killed outside Cookstown disco are laid to rest

Funeral services have taken place for three teenagers, who died outside a disco on St Patrick's n...

Teens killed outside Cookstown disco are laid to rest

Funeral services have taken place for three teenagers, who died outside a disco on St Patrick's night in Cookstown, Co Tyrone.

The three lost their lives in a crush, while queuing to get into the Greenvale Hotel.

17-year-old Lauren Bullock died at the scene - while Morgan Barnard, also aged 17, and 16-year-old Connor Currie died after being brought to hospital.

Police believe the crush happened as a large group of teenagers surged towards the front door of the hotel.

Morgan was the first to be laid to rest after a 10am funeral mass in St Patrick's Church in Dungannon.

Pupils from St Patrick's Academy, where Morgan was a student, formed a guard of honour.

His family encouraged people to wear Hawaiian shirts or sport tops for the service.

It began with an address from the leader of the Catholic Church in Ireland, Archbishop Eamon Martin.

He said: "Words fail us at times like this, and all that really matters - all that makes a difference - is family and love and friendship and compassion".

Morgan's friends also paid tribute, with one telling the service: "Morgan was my best friend, and no matter where he is he'll always be my best friend - and I'm going to love him forever".

The family of Lauren Bullock gathered at St Patrick's Church in nearby Donaghmore for her funeral mass.

She was carried into the church in a pink and white casket.

Her school friends and cheerleading teammates formed a guard of honor outside the church. 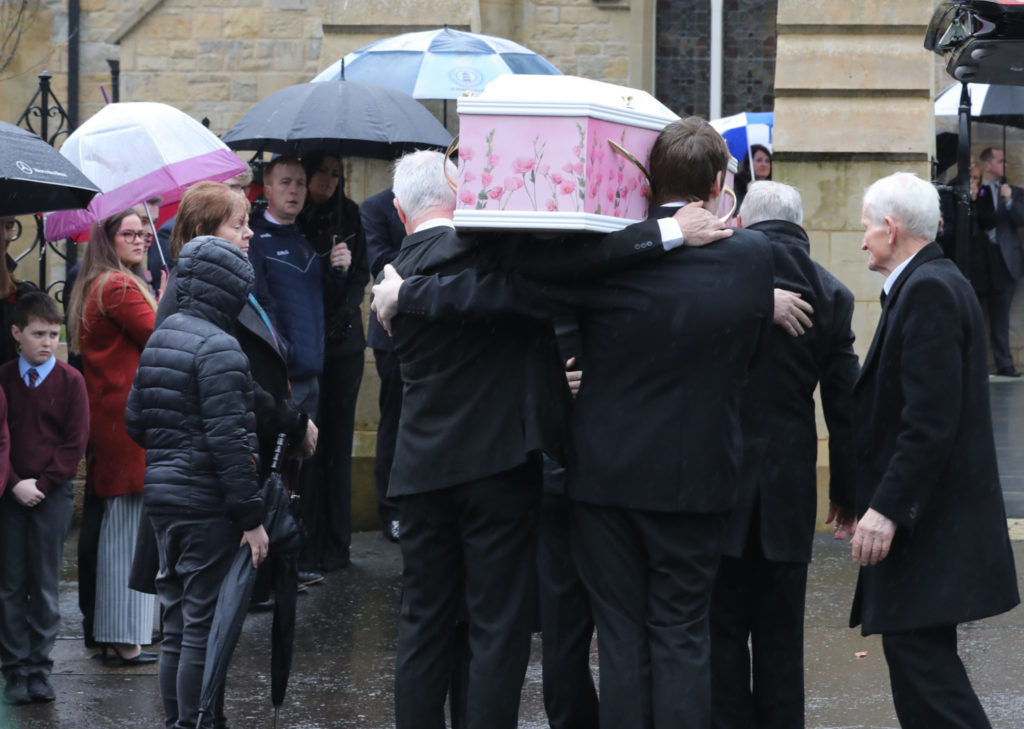 The youngest victim Connor Currie was laid to rest after funeral mass in St Malachy's Church at Edendork this afternoon.

A football trophy, a jersey and a pair of boots were brought to the alter as symbols of Connor's life.

He was remembered as a star both on and off the football pitch.

The PSNI has said investigations into the tragedy are ongoing.

Detective Chief Superintendent Raymond Murray, head of the PSNI's Serious Crime Branch, said: "My thoughts and the thoughts of all my officers are very much with the families. Our job is to get them answers as to why they have lost their children."

To date, detectives have identified 400 young people who were in the queue or car park on Sunday evening.

Some 82 of those young people have now been interviewed and arrangements have been made to interview 106 others over the next few days.

Superintendent Murray said: "As part of our investigation we have utilised the Major Incident Public Portal to allow people to upload mobile phone footage and images of the evening.

"We have also deployed one of our Cyber Support Vehicles to Cookstown to enable us to download mobile phone footage from people at the scene.

"Detectives would continue to appeal to anyone who has not yet contacted us to please come forward and in the joint statement from the three families, they have made clear their wish that witnesses come forward and talk to police."

He added: "Detectives would again reassure anyone with concerns, the focus of our investigation is not the age of people who were at the event - it is about trying to find answers for the families of the three teenagers who tragically died."

Meanwhile, a 40-year-old man who was arrested on suspicion of manslaughter in connection with the investigating has been released on police bail:

A 40 year old man arrested on suspicion of manslaughter by detectives investigating the deaths of three teenagers at the Greenvale Hotel in Cookstown on Saint Patrick’s Day, has been released on police bail pending further enquiries.

Main image: A mass booklet from a memorial service in memory of Lauren Bullock, with floral tributes, at the entrance of the Greenvale Hotel in Cookstown, Co Tyrone | Image: Liam McBurney/PA Wire/PA Images

Man arrested on suspicion of baby's murder in Co Tyrone