Concern over level of methadone use in Irish prisons

Nearly 17% of Irish prisoners are on methadone, which is generally used to treat heroin addiction...

Concern over level of methadone use in Irish prisons

Nearly 17% of Irish prisoners are on methadone, which is generally used to treat heroin addiction.

The figures have led to concerns that methadone is being used far too much in Irish jails.

According to the Irish Prison Service, there are just over 4,000 people currently in jails across the country.

In total, 669 prisoners were on a methadone treatment programme at the end of October – which is 16.7% of the total prisoner population.

The highest percentage is in the Dóchas women's prison in Dublin, at 46 per cent.

Cloverhill has the second highest at 32%.

Mountjoy prison has about 700 inmates and the latest stats show 190 are on methadone - nearly 28% of the jail's population. 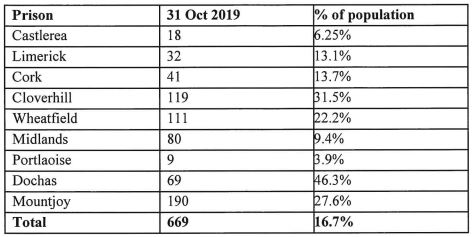 Dr Greg Kelly, who worked as a doctor in Castlerea prison, said such widespread use of the substance is cause for concern.

“Methadone detox as a short-term treatment, I absolutely agree with and accept,” he said.

“But the long-term use of methadone for months, years or indefinitely in prison makes no sense to me whatsoever and I think it should be withdrawn.”

These new stats, released under the Freedom of Information Act, also show an increasing number of prisoners are engaging in addiction counselling services.