A new coin has been launched to mark 100 years since the first non-stop transatlantic flight, whi...

A new coin has been launched to mark 100 years since the first non-stop transatlantic flight, which landed in Clifden, Co Galway.

The silver commemorative coin from the Central Bank is limited to 3,000 pieces.

In 1919, Captain John Alcock and Lieutenant Arthur Brown landed their Vickers Vimy airplane in a bog in Clifden.

In doing so, they achieved the first non-stop transatlantic flight with a duration of 16 hours and 28 minutes, and landing about 40 kilometres north of their target destination.

The airplane had taken off from St Johns in Newfoundland the previous day. 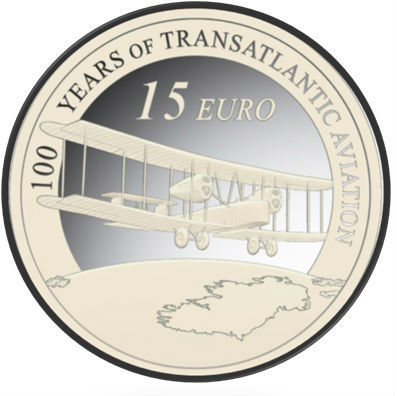 The Central Bank presented a silver coin to Group Captain A J H Tony Alcock - nephew of Captain John Alcock - at the coin launch on Friday.

Struck in .925 sterling silver to proof quality, the coin was designed by Irish artist PJ Lynch.

The Vickers Vimy Biplane is in the fore of the design, and behind the plane is a period style map.

Derville Rowland is director-general of financial conduct at the Central Bank of Ireland.

"I am honoured to launch this €15 silver coin on behalf of the Minister for Finance, to mark 100 years of transatlantic aviation.

"In completing this flight Alcock and Brown displayed competence, courage and resilience and did more than merely earn themselves a place in the history books.

"The two aviators had carried 197 letters across the ocean - effectively giving birth to transatlantic airmail.

"That in turn would bring both personal and business benefits to people all over the world.

"Today, we are celebrating an important historic moment that marked the beginning of transatlantic aviation, when new possibilities emerged and new connections were forged."