The use of spit hoods by An Garda Síochána is "hazardous and reckless", according to the Irish Council for Civil Liberties (ICCL).

Spit hoods, or spit guards, are designed to protect police from people spitting or coughing on their face.

Speaking to Shane Coleman on Newstalk Breakfast, Liam Herrick, the Executive Director of the ICCL, said the hoods should not be used by members of the Gardaí under any circumstances.

He said: "They shouldn't be allowed until they've been properly tested and their safety has been assured and a proper impact assessment is needed to look at how these might have an effect on the public in practice.

"I think the difference here is that it has been presented that the spit hoods, or spit guards as the Gardaí refer to them, are a form of PPE when in fact the manufactures themselves say they're not."

Mr Herrick said the hoods do not provide an effective means of protecting the Gardaí from the transmission of COVID-19 or other infectious diseases.

He said: "They're in fact a restraint and control device which involves placing a hood over somebody's head and we've seen from the United Kingdom and elsewhere that it, in fact, can be highly dangerous.

"These can cause suffocation in some instances, they can have a traumatic effect on people.

He said their use "is unpredictable" because the Gardaí don't necessarily know if the person has a vulnerability or psychiatric condition.

Mr Herrick added: "Most worrying of all, because the placing fo the hood will usually involve a conflict or force it can actually increase the risk to the guard who is putting it on because of airborne particles.

"This is hazardous, reckless and it hasn't been properly tested."

Christy Galligan, who served with An Garda Síochána for more than 30 years said that spit hoods are only used a method of last resort.

"If it's a measured response and it's proportionate and reasonable, I think it's very important that Gardaí have that."

He said that the "premier objective" of spit hoods is "to stop the transmission of infectious diseases" and agreed that more research is needed to be carried out on their use.

"We're not talking about controlled environments when we're talking about people who may be violent offenders or drunk or under the influence of drugs who are spitting or coughing in the faces of An Garda Síochána.

"I know from first-hand experience what it's like to be spat at and we need some way of restraint.

"There are different forms of spit guards, there's no one size fits all here." 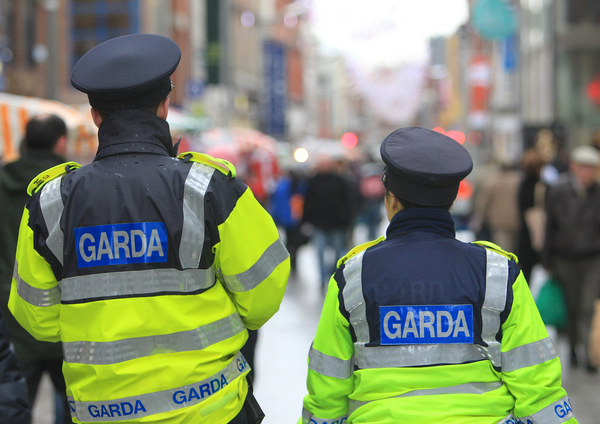 Mr Herrick from the ICCL said spit hoods do not constitute a form of PPE.

He said: "There are protocols under the Garda Act when a new kit is provided to the guards that it's properly tested before it's introduced and this hasn't happened here.

"Now we've a situation where it's been suggested they might be used in the longer term when originally this was supposed to be an emergency response to COVID.

He said research from the UK and the EU shows the use of the hoods has been cautioned.

He added: "Because other than being something that's inherently dangerous, it's demeaning and degrading so I think we have understandably tied to protect Gardaí which we, of course, want to do but we feel this is the wrong way about it.

Mr Galligan said he agreed that Gardaí should have proper PPE but that he doesn't align PPE with spit guards.

He said: "PPE is totally different to spit guards, spit guards are a preventative measure and they're trying to prevent somebody from spitting and coughing in someone else's face.

"No one wants to see that, it's disgusting and it's an awful habit that somebody would do something like that.

He added: "Nobody wants to see spit guards used indefinitely in relation to policing but we need some safeguards in place for members who are out on the frontline."

Main image: File photo of a spit hood on a mannequin. Picture by: Simon Sachseder/DPA/PA Images