The council yesterday signed off on ambitious proposals for two carbon budgets, as well as a provisional third budget.

They're being proposed as part of the Government's commitments to reduce emissions by 51% by 2030 and achieve 'net-zero' carbon by 2050.

The first two budgets each cover five-year periods between now and 2030.

Under the proposals, there’d be a 51% reduction in greenhouse gas emissions from the State by 2020 (compared to 2018 levels).

The council says it doesn’t believe that a 7% per annum reduction for the first budget is ‘appropriate’ - instead aiming for a lower 4.8% reduction.

However, the process would then be accelerated between 2026 and 2030, aiming instead for an 8.3% average annual reduction. 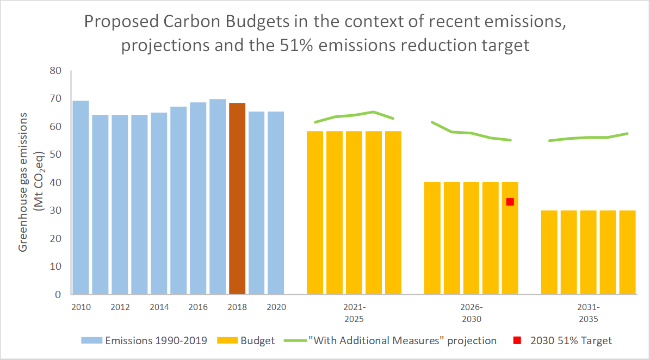 Sector-by-sector targets are expected in the coming weeks, when the Government sets out its new climate plan.

Marie Donnelly, Chair of the Council, said the proposed carbon budgets will have an impact on society and the economy - but they’ll also allow Ireland to act on climate change in a “planned and organised way”.

She said: “The budget is based on the best available science and defines an appropriate and necessary path to addressing the climate challenge.

“Many of the changes required now will only have a real impact on emissions in the second period.

“Now is the time to put policies and supports in place that will help those people, communities and businesses that will be impacted by the significant changes we need to make to how we live, work and travel.”

The council’s budgets must now be approved by the Government and the Oireachtas.

He said: “The first two 5-year carbon budgets equate to a total reduction of 51% emissions over the period to 2030. This is part of the journey towards ‘net zero’, which commits us to the transition to a ‘climate resilient, biodiversity rich, environmentally sustainable and climate neutral economy’ no later than 2050.

“The Government will shortly publish Climate Action Plan 2021. Every sector of the economy will need to play its part. There will be different targets for each sector, based on their respective starting points and the relative difficulty, cost, speed and benefits of reducing emissions.”

Minister Ryan said meeting the targets will be ”challenging” and require “fundamental changes in many parts of Irish life”.

However, he said there’s also an opportunity to create “a cleaner, greener economy and society that cuts emissions, creates jobs and protects our people and the planet”.

'The house is on fire... we have to do whatever it takes' - John Gibbons on urgent need for climate action