EU leaders are considering whether to grant the UK a further Brexit extension, following a reluct...

EU leaders are considering whether to grant the UK a further Brexit extension, following a reluctant request from the British Prime Minister Boris Johnson.

MPs in the House of Commons yesterday voted to delay a 'meaningful vote' on the new Brexit deal, forcing Mr Johnson to ask for a further extension beyond October 31st.

He sent an unsigned letter to the EU last night asking for an extension, alongside another signed letter outlining why he was opposed to any delay beyond this month.

A third letter from the British government also explains to the EU that the prime minister was legally obliged to send the extension request under the terms of the so-called 'Benn Act' - the legislation agreed by MPs last month in a bid to avoid a no-deal Brexit. 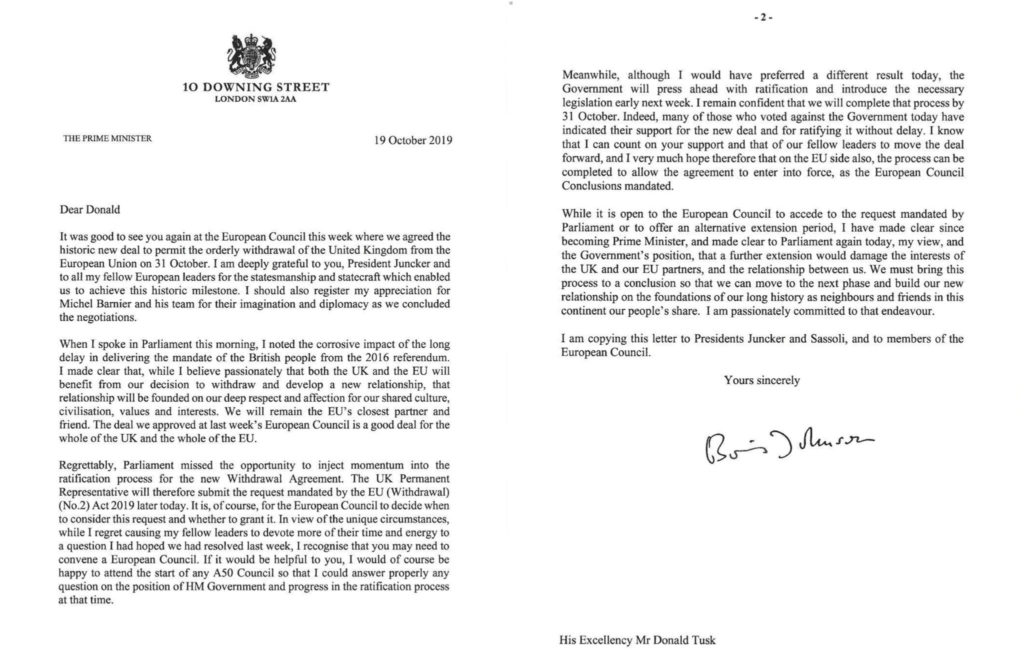 In this image issued by 10 Downing Street, showing of a letter written by British Prime Minister Boris Johnson addressed to the European Council President Donald Tusk asking the European Union for a delay to Brexit Saturday Oct. 19, 2019. (Downing Street via AP)

Mr Johnson writes: "Regrettably, parliament missed the opportunity to inject momentum into the ratification process for the new Withdrawal Agreement.

"While it is open to the European Council to accede to the request mandated by parliament or to offer an alternative extension period, I have made clear since becoming prime minister, and made clear to parliament again today, my view, and the government's position, that a further extension would damage the interests of the UK and our EU partners, and the relationship between us.

"We must bring this process to a conclusion so that we can move to the next phase."

He added that he "remains confident" that the necessary legislation to allow for Brexit - with a deal - on October 31st would be passed next week.

The British government has confirmed it will seek another meaningful vote on the new deal tomorrow, although it will be up to House of Commons speaker John Bercow to decide whether the vote will go ahead after MPs voted to delay the process yesterday.

Donald Tusk confirmed late on Saturday night that he'd received the letter, not long before the 11pm deadline that had been set by the House of Commons for Mr Johnson to ask for an extension.

The extension request has just arrived. I will now start consulting EU leaders on how to react. #Brexit

Labour's John McDonnell has accused Mr Johnson of "behaving like a spoiled brat".

Speaking on Sky News, he suggested the prime minister has engineered "theatre" by sending the multiple letters.

Mr Johnson has previously insisted he'd rather be 'dead in a ditch' than delay Brexit.

He told the House of Commons yesterday that he would not "negotiate" any further extension with the EU.

Votes on the new Brexit deal are now expected to take place in the House of Commons in the coming days, amid continued opposition to the UK / EU agreement from Labour, the DUP, Liberal Democrats, SNP and others.