Former US president Bill Clinton has paid tribute to John Hume as a "great man and a model for wh...

Former US president Bill Clinton has paid tribute to John Hume as a "great man and a model for what we should get back to in the world today".

"I could never get enough of trying to soak up his fundamental good nature." Former US President, @BillClinton on the legacy of John Hume. pic.twitter.com/jNNqo2R6Lt

Mr Clinton says the Northern Irish politician was someone who was "fundamentally motivated by love for his fellow Irish men and women, whether they were with him or not".

He said he wishes more people "spoke from the heart for human unity" like Mr Hume, rather than attempting to divide people.

Mr Hume, a former leader of the SDLP and Nobel Peace Prize winner for his role as an architect of the Northern Ireland Peace Process, died yesterday at the age of 83.

He worked closely with the then president Bill Clinton during the period that led up to the Good Friday Agreement in 1998.

Mr Clinton told The Pat Kenny Show that he said a "silent prayer of thanks for [John's] life" when he heard of the Derry man's passing.

The former US president said: "He had a rough time of it the last couple of years or so, but what a great life he had... how much good he did, and what a good heart he had.

"I wish we had more people speaking from the heart for human unity instead of working for the head to divide people, which seems to be the order of the day in altogether too many countries today."

He explained: "They never lost touch with ordinary people and what the day-to-day concerns of life are. They put themselves on the line and fought hard for what they believed in... they never felt the need to demonise people who disagreed with them. They always left open space for working together."

'A guy with a good heart'

Mr Clinton recalled that he first met Mr Hume early in the presidency, and then "many times" over his eight years in office.

He said: "After I left office, I continued to stay in touch with them and always did what I could whenever I was in Ireland or Northern Ireland.

"I do remember when I first saw him I thought 'this is a guy who looks like his public image' - he looked like a guy with a good heart who had clear convictions, but didn't feel the need to demonise and debase other people. That's the way he looked with his wavy hair and sly smile, and that's the way he behaved."

He said Mr Hume had a sense that "sometimes people in more prominent political positions might have missed". 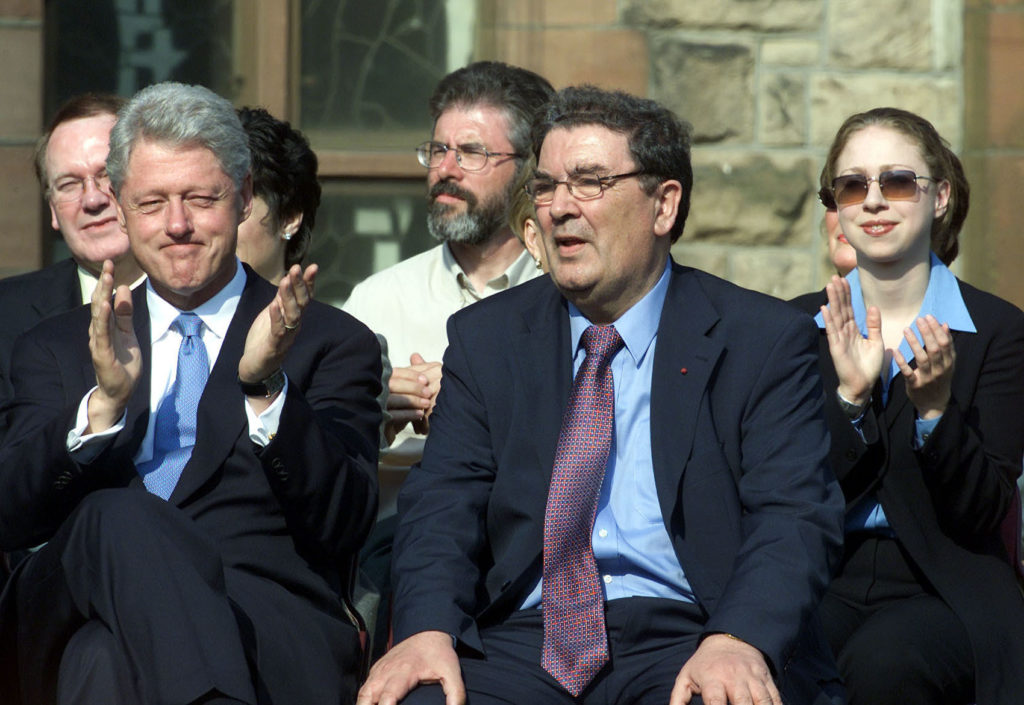 He said the SDLP politician also "didn't betray confidence" - something that helped ensure people trusted him during the process.

Mr Clinton observed: "He was always keeping in touch with everybody, always there to give the right nudge.

"I could sit and listen to him tell his stories all night long - I love listening to him tell not only stories of what had happened in the peace process, but also the stories of his life.

"He'd give me the whole history of Derry - he was very provincial in that one way. He always insisted we had to have one big event early on in Derry when we got the ceasefire.

"When I came to turn on the Christmas lights in Belfast and then to go down to Dublin, he said [...] I had to come to Derry. He was right about it: it was a great thing to do."

Mr Clinton said he always tried to soak in John Hume's "fundamental good nature" - and pointed out that he was also very funny.

He said: "My abiding memories of him personally are of a wonderful storyteller, a person who cared about people as people and not just as political objects, and a person who really could be totally persistent and tough in what he believed... but was fundamentally motivated by love for his fellow Irish men and women, whether they were with him or not."

Mr Clinton said he has spoken to Mr Hume's wife Pat, who was "very, very grateful for the life" she had with John.

The former US president said the peace process in Northern Ireland is a model the world should follow today.

He explained: "If you look at the consequences for Northern Ireland and the Irish Republic... and the relationships between the UK, Republic of Ireland and Northern Ireland... it is a great rebuke to what has been the dominant political argument of the last four years, which is 'the only thing that matters is division... the only thing that matters is what is different about us'.

"That's what all of this sort of ultra-nationalism is about, particularly when it's joined with either religious or racial and ethnic differences. It's left us with a mess.

"If you look at the legacy of the peace process and its aftermath - with all of its warts, imperfections and unresolved issues - it did not leave a mess.

"It left a march of progress, a decline in violence, and a better future for all the children of Northern Ireland.

"It seems to me people who really loved, respected and valued John Hume should be really grateful for what he did - but also should be mindful if we were following that model in the world today we'd be doing better on everything from our political differences to our economic inequality to our management of this global health epidemic."

Mr Clinton said it's vital that people have an "outstretched hand instead of a clenched fist".

Again paying tribute to Mr Hume, the former president said: "No matter what kind of fight he was in, he had a smile on his face, and his hand was reaching out to shake yours.

"I said 'John, if you hadn't been such a great politician you'd have been a great pickpocket' - it was easy to lose yourself looking into those eyes of his. He was a great man, and a model for what we should get back to in the world today."