Myanmar leader Aung San Suu Kyi has defended her country from charges of genocide, saying there i...

Myanmar leader Aung San Suu Kyi has defended her country from charges of genocide, saying there is "no tolerance" for human rights violations against the Rohingya Muslim minority.

The Nobel Peace laureate appeared before the United Nations highest court for a hearing into allegations that a 2017 military campaign against the Rohingya in Myanmar's Rakhine state amounted to genocide.

She said the case brought against her country was "incomplete and misleading".

More than 700,000 Rohingya fled to neighbouring Bangladesh during the campaign - which has been described as ethnic cleansing involving mass rapes, killings and the torching of homes.

Most of the Rohingya now live in crowded refugee camps in Bangladesh.

The case before the UN's International Court of Justice in in The Hague was launched by Gambia, which has a predominantly Muslim population, in November.

Gambia has accused Buddhist-majority Myanmar of violating the 1948 Genocide Convention.

On Tuesday, lawyers for the country detailed graphic testimony of the suffering of Rohingya at the hands of the Myanmar military, as Ms Suu Kyi listened on impassively. 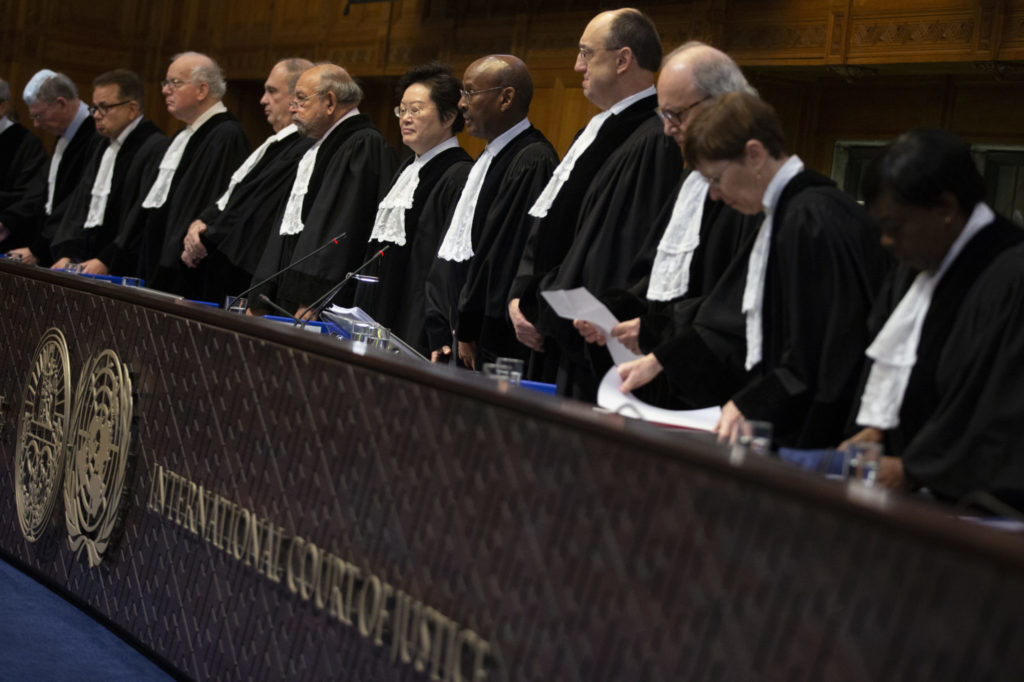 Presiding judge Abdulqawi Ahmed Yusuf of Somalia, fifth from right, and other judges open the second day of three days of hearings in the case brought by Gambia against Myanmar at the International Court of Justice in The Hague, Netherlands | Image: Peter Dejong/AP/Press Association Images

As evidence of her close ties to the military, a photograph of Ms Suu Kyi with three smiling generals, who are also Myanmar government ministers, was shown to the courtroom by Gambia's legal team.

"Gambia has placed an incomplete and misleading picture of the factual situation in Rakhine state in Myanmar," she told the court on Wednesday.

She said the troubles in Rakhine state "go back centuries".

Ms Suu Kyi, who won the Nobel Peace Prize in 1991 for championing human rights under Myanmar's then-ruling junta, is defending those who once held her under house arrest.

It marks an extraordinary fall from grace from a woman once held as a pro-democracy symbol.

Ms Suu Kyi was stripped of an Ambassador of Conscience Award by Amnesty International last November.

Dublin City Council also revoked its Freedom of the City award to her.

She was awarded the Irish honour in 2012, following a two-decade struggle for democracy in the South East Asian country. 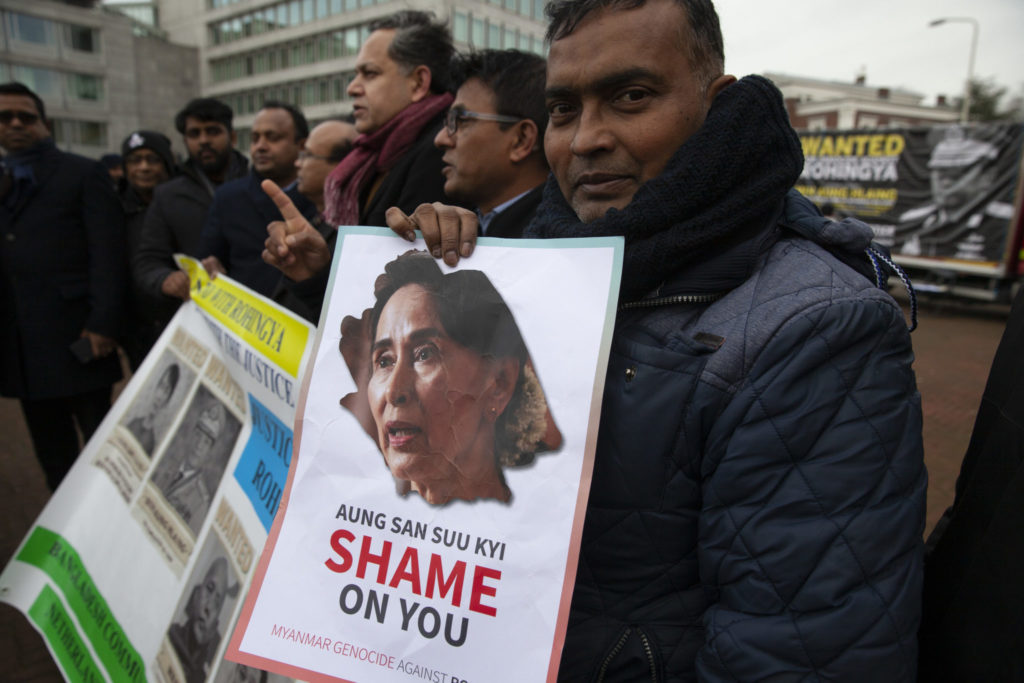 Myanmar has previously said the campaign in Rakhine was a legitimate counter-terrorism operation following attacks on the security forces by Rohingya militants.

It is only the third genocide case filed at the International Court of Justice since the Second World War.

The other two relate to crimes in the former Yugoslavia - the Srebrenica massacre of Bosnia's Muslim population in 1995 and the accusations of genocide between Croatia and Serbia during the Croatian war of secession.

The tribunal has no enforcement powers, but its rulings are final and have significant legal weight.

Judges are hearing the first phase of the case in three days of hearings this week.

Gambia has requested "provisional measures" - the equivalent of a restraining order against Myanmar to protect the Rohingya population until the case is heard in full.

Gambia argues that every country has a duty to prevent a genocide from taking place, and has political support from the 57-member Organisation of Islamic Cooperation, Canada and The Netherlands.

No court has so far weighed evidence and established a genocide in Myanmar, despite a United Nations fact-finding mission finding that "the gravest crimes under international law" were committed in the country.